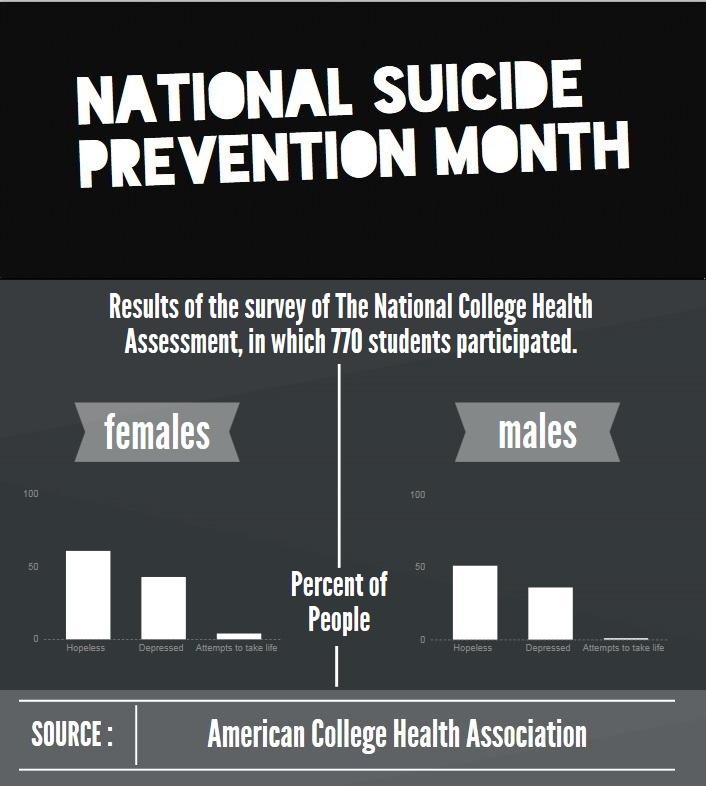 Suicide is the second highest cause of death for young people around the nation and stands as a lethal epidemic that discriminates against no one.

September is National Suicide Awareness Prevention month and City College has taken steps to do its part in getting the word out. City College emailed all students and faculty information sheets on the issues that can affect students and what they can do to help.

All students enrolled in classes for credits get six free sessions of personal counseling per semester from City College and are encouraged to refer friends and colleagues in crisis.

One City College student, whom wishes to remain anonymous, was grateful for the free sessions offered on campus.

“I was really messed up when my dad passed away and I couldn’t afford counseling,” he said. “These sessions made it possible for me to find the tools I needed to help myself.”

The National College Health Assessment hosted a student survey last spring to quantify and compare nationally the concerns and vices prevalent in student life. The survey was given randomly and concluded with the participation of 770 City College students.

There are many elements that lead to thoughts of suicide that are common among almost all students. These include but are not limited to work, academia, stress, or alcohol and drug-abuse.

Meanwhile one percent of males and four percent of females at City College had attempted to take their own lives in the past twelve months.

According to the World Health Organization, for every death by suicide there are twenty more lives that are threatened by the same fatal risk.

“It takes all of us on campus –– students and staff,” said Personal Counselor Alyson Bostwick. “ And a lot of people that come in are getting the help they need.”

She said that the number one reason that students become over stressed is due to the lack of stress management, something that personal counseling can address.

Students are encouraged to head to the Student Health Services office in room 170 of the Student Services building to make an appointment to see a counselor. All sessions are confidential within legal constraints and not part of the student’s academic record.

Suicides hotlines are open 24 hours a day and are available to call at 1-800-SUICIDE or 1-800-273-TALK. Go to www.suicide.org for more information.