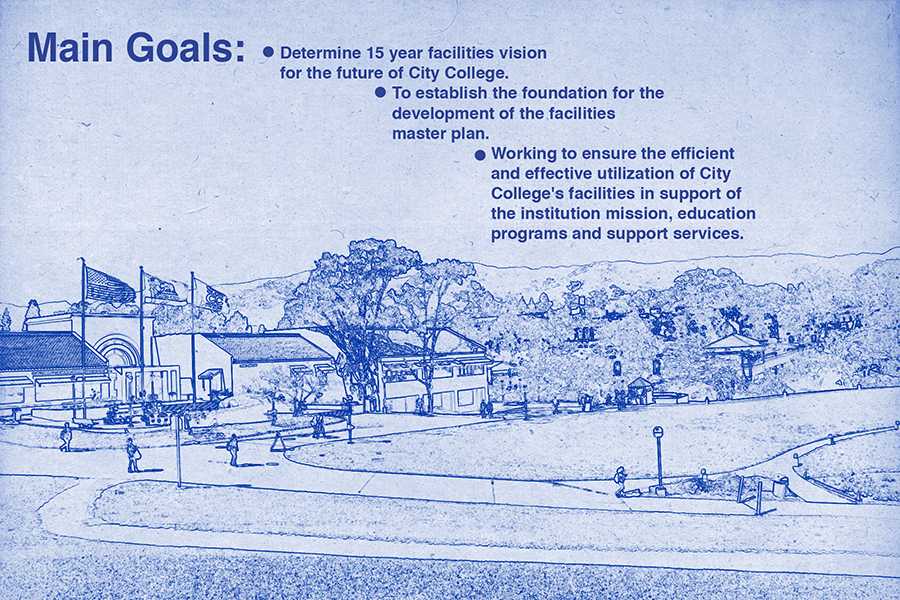 The Program Location and Land Use Master Plan is producing a 15-year master plan to revise facilities at all three City College campuses. The hope is to improve the use of all facilities, education programs and support services.

PLLUMP is a study to improve and utilize all facilities and resources of City College.

The program came into being because there is currently no division between credit and non-credit courses among the three City College campuses. This causes crowding and the well-known traffic and parking problems on main campus.

The modification and optimization of City College is aimed to bring convenience to the structure of campus affairs and its method of operation.

“In 2008, we identified that a facilities master plan was non-existent,” explained Lori Gaskin, City College superintendent-president. “Make it so it’s like one stop shopping. Human Resources isn’t a student service, but it’s in the Student Services Building—it can be moved.”

PLLUMP is broken down into three phases; discovery, program and future. Each phase illustrates the cost as well as process of each step taken to make PLLUMP’s goals a reality.

Phase one concluded last spring at a cost of $35,000, resulting in the completion of PLLUMP’s process map detailing upcoming operations. Plans since have shifted toward phase two and is estimated to cost $492,000 before completion.

Phase one and two are currently funded by the Measure V bond that passed in 2008. This awarded City College $77.2 million for improvements of infrastructures and other plans for modernization. Measure V has funded the construction of the Humanities Building, Garvin Theatre and the Drama Music Building, as well as other upgrades around campus.

The Board of Trustees unanimously approved the placement of a $288 million facility improvement bond measure, titled Measure S. It’s directly linked to the future of PLLUMP and will be on the local ballot of the Nov. 4 election, requiring a 55 percent vote in favor to pass. Two surveys were conducted locally by an independent polling firm and concluded both times that the people are 90 percent in favor of passing the measure.

Everyone who’s a registered voter in the Santa Barbara Community College District is eligible to poll their opinion on this matter.

If it passes, Measure S will grant City College a bond of $288 million. This would cost taxpayers $16.65 annually per $100,000 of their homes assessed value. To ensure the funds are properly used, the bond will require a citizens oversight committee and annual third party audits.

This is the current target resource for funding phase two and three. Gaskin explains if Measure S gets shot down, they will still have the groundwork to leave the school with a fundamental 15-year plan and in that time, funding could be sought elsewhere.

PLLUMP and Measure S will potentially lead to the removal of portables, replacement of the Campus Center and the renovation of the Occupational Engineering, Administration, and Student Services Buildings.

Kinks with “ingress and egress” of student traffic and parking will be tackled by PLLUMP. Parking‘s a loud issue among faculty and students at City College and restrictions prevent solutions that would require additional land use.

The Coastal Commission aligns with coastal cities to regulate the use of land and water and will not allow City College to create any new parking spaces. The result of this is to reconfigure the parking lots to prevent high influx areas from choking with traffic, without adding more spaces.

The community is asserting pressure on City College to acknowledge student housing. However, PLLUMP doesn’t directly address this subject.

“[PLLUMP] fits really well in that it shows we are looking at the issues stirring up the community,” said Julie Hendricks, director of facilities and campus development. “Parking, transportation, housing—this plan has every intention at looking at how to address those topics.”