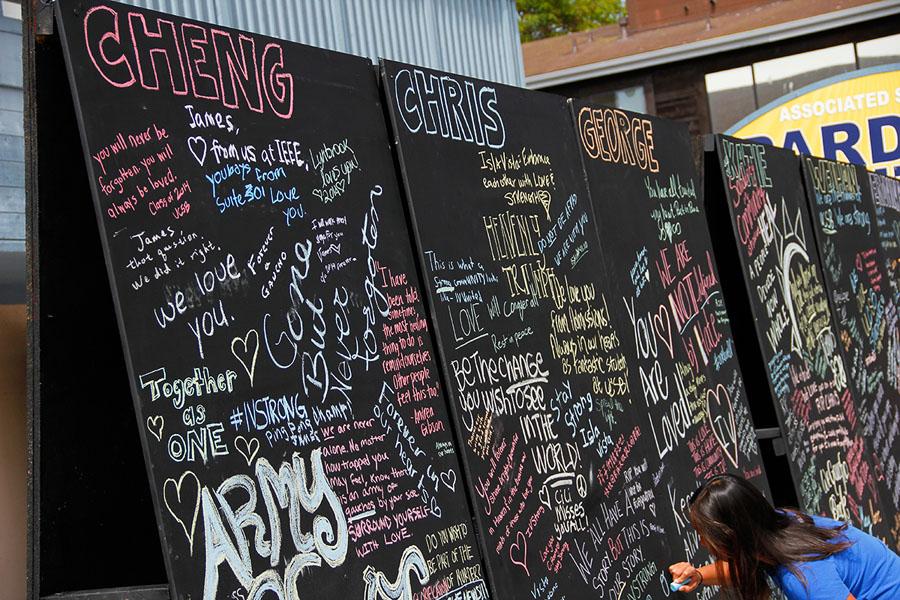 A woman writes with chalk on the Art Wall of Remembrance at 6550 Pardall Street in Isla Vista, on May 27.

In remembrance of the Isla Vista slayings on the night of May 23, 2014, UCSB declared Tuesday, May 27, “The Day of Mourning and Reflection.”

According to a campus-wide email sent this morning, faculty and staff at City College were also given a chance to depart from work early to attend the memorial service at Harder Stadium. City College also canceled their plans to have a live shooter drill on campus because it would be disrespectful to the friends and families of victims.

The event was organized by the faculty, students and staff of UCSB. Students from City College and UCSB, Isla Vista residents, and community members attended the memorial to honor those harmed.

“At a time when we should be basking in the glow of our students’ academic achievements, we are instead mourning the loss of members of our extended family,” wrote City College Superintendent-President Lori Gaskin in a faculty email. She invited staff members to join in an informal meeting between 9:30 and 10:30 a.m. to reconnect with one another.

In total, 13 people were victim to Elliot Rodger’s attack.

“Frankly, I wish I were not here,” said University of California President Janet Napolitano. “None of us want to be here for an occasion like this—but we are.”

Prior to the memorial service, service dogs, counselors, massages, free-hugs and acupuncture therapy were offed to anyone who wished to take advantage of the services.

The Art Wall of Remembrance on 6550 Pardall Street, is where many gathered before heading to the service. The wall was covered in messages written by those wishing to offer their condolences and final farewells to those lost in the tragedy. As space ran out, the words poured on the sidewalk written in colorful chalk.

With word spreading of a presence of religious protestors, the community was asked to ignore all of their opinions and actions.

People arrived at Harder Stadium, flooding the streets and surrounding area on bikes, skateboards and foot as they moved languidly to seats. The service commenced 20 minutes late to allow the steady flow of supporters to settle in.

Only standing room was available after all of the stadium seats filled, as well as a sea of support covering the field where people willingly sat. The front 10 rows were reserved for families of victims, faculty and staff.

The memorial service was visibly heart wrenching for the entire community and all those attending. As time has passed, sorrow settled in as the audience carried the grief of the recent catastrophe.

The only bright colors that appeared on the main stage were the six flower wreaths in honor of the victims lost on Friday night.

“We share in the overwhelming heartbreak of the families, friends, and classmates,” echoed UCSB Chancellor Henry Yang. “At the same time we grieve, we remember the joy and light that they brought into this world. The last few days were dark ones, but we are moved by the compassion and courage we have witnessed…”

Yang addressed the speedy and heroic actions of the police that prevented many more potential murders; all gratefully stood in a roaring applause.

Father of victim Chris Martinez, Richard Martinez, took the stand with an unshakable spirit. He addressed all without ever losing his composure.

He mentioned that he had just met the other victims’ families prior to the service beginning, and would read the words of the families.

Speaking stern and persuasively to the crowd, he asked all to remember three words, “Not one more,” in order to urge national leaders to make a difference in the world regarding violence and firearms.

The crowd joined together while stomping the stadium seats for the unforgettable chant, “Not one more,” as Martinez led with a single finger pointing to the sky.

As Martinez left the podium, the crowd gave him a deafening standing ovation commending him for the inspirational words he left them with.

UCSB’s all-female a cappella group, Vocal Motion, dazzled the crowd with an uplifting Florence and the Machine song, “Shake It Out.” The song gave relief to the crowd as their voices reached those mourning, giving them a breath of hope.

“Our love, humanity, and passion are what bring everyone together–that was everywhere today,” said 22-year-old UCSB student, Sabine Arias. “On the contrary to everything, if Elliot had love, he may not have done what he did.”

Editors Note: A version of this story published Wednesday, May 28 erroneously reported that City College faculty was given Tuesday, May 27 the day off. In fact, faculty of City College were allowed to depart from work early in order to attend the memorial service at Harder Stadium.