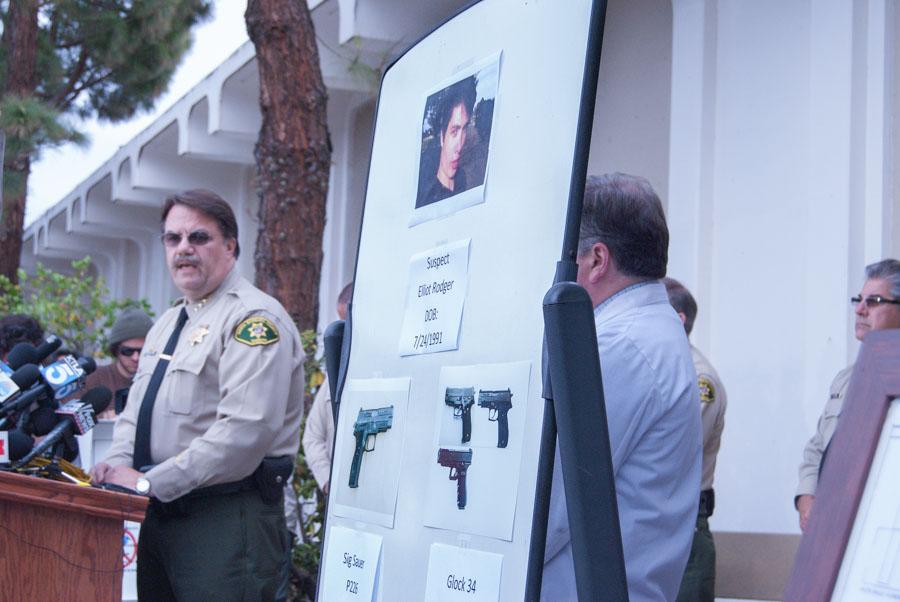 Santa Barbara County Sheriff Bill Brown answers questions at a Press Conference regarding the horrific Isla Vista murders by 22-year-old Elliot Oliver Robertson Rodger, at the Sheriff Headquarters on Saturday, May 24, in Santa Barbara, Calif. Rodger, a City College student, went on a murderous rampage of "retribution" on Friday night, May 23, killing six innocent students and hospitalizing seven others.

Rodger’s identity was confirmed by Sheriff Bill Brown at a press conference late this afternoon.

Shortly afterward, Superintendent-President Dr. Lori Gaskin sent an email to City College staff, writing, “None of the identified deceased victims were students at the college.”

She also detailed that Rodger finished only three courses at City College—in 2011. Since then, he either withdrew or stopped attending all other classes in which he registered.

Gaskin was at the Sheriff’s Department this afternoon, and was credited by Brown as being one of several area leaders cooperating with the investigation.

Attempts by The Channels to speak to her directly today have been unsuccessful.

Brown spoke to a crowd that included journalists from national news media. He confirmed that Rodger stabbed three males to death in his apartment complex before going though Isla Vista and murdering three more victims.

In total, 13 people were victim to this attack. Seven were transported to area trauma centers, where two are in good condition, three in fair condition and two still in serious condition, according to Dr. Stephen Kaminski, director of trauma services at Cottage Hospital.

The investigation is ongoing, and the Sheriff’s Department throughout the week will continue releasing information after victims’ relatives have been notified. Services are available currently at UCSB for all students and will be offered at the City College campus in the Student Health Services Office  in the Student Services Building beginning next week.

A vigil is scheduled for later tonight at UCSB’s Storke Plaza in honor of the victims. A Channels report on that event, which is expected to draw thousands, will follow later tonight.