Personnel chief gets top marks (and $1,000) from SBCC peers 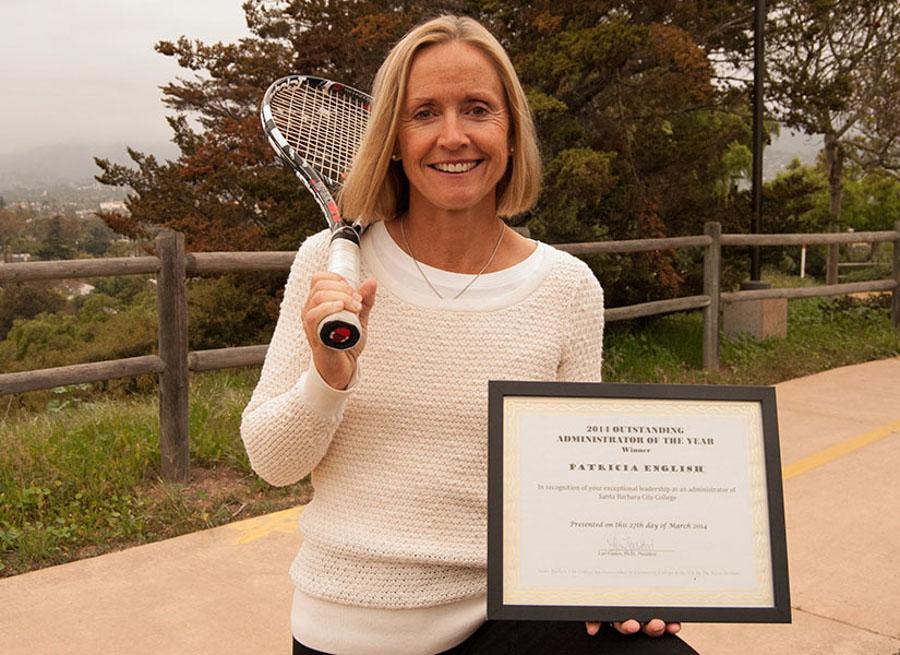 Patricia English, vice president of human resources, holds her Outstanding Administrator of the Year award for 2014 on East Campus, Friday April 18, in Santa Barbara, Calif. In her free time, she enjoys hiking, playing tennis and being a mother to four boys.

The creator of City College’s Outstanding Administrator of the Year Award found herself in the winner’s circle for 2014.

Patricia English, vice president of Human Resources, is the second administrator to receive the award since its founding in 2013.

“I was amazed and humbled to be nominated because it just felt so good to have the people that you work with everyday say, ‘You deserve this,’ and then you have your colleagues choose you,” English said.

“It was quite a moment.”

About 60 administrators who work for City College were nominated for the award. Karen Sophiea, marketing director; Dan Watkins, director of IT and Infrastructures; and Lauren Wintermeyer, dual enrollment coordinator, were awarded honorable mentions.

English said she was honored to be among such sterling company.

“They are all fabulous competitors on the ballot,” she said.

Human Resources is responsible for all of the employment on campus. They are also responsible to make sure all the employees comply with their contracts. If a problem happens with an employee, they support the supervisor and provide a solution.

“I have a lot of responsibilities over decisions that affect the people’s lives and I take that very seriously every day,” said English. “When I lose that perspective, it will be a time for somebody else to step in.”

English has worked for City College since 2001. She works with nine coworkers in Human Resources. English hopes her staff feels like they work with her, not for her.

“I’m proud of this team,” English said. “We are really working closely together.”

English said City College has transformed since Superintendent-President Dr. Lori Gaskin arrived. She has been changing the institution inside and out with her ability to communicate.

In an interview, Gaskin said her best friend is English.

“If you think about it, a college is about its people. Pat brings a tender, loving care approach to Human Resources,” Gaskin said. “She brings tenderness and sensitivity to the fact that we are an institution about people.”

English moved to Santa Barbara from her hometown Chicago in 1979 because she was offered an opportunity for a human resources job locally. She attended many schools in the Chicago area, and earned bachelor degree in management from Golden Gate University’s satellite school in Santa Barbara.

Spending time with her family is English’s first priority. She also loves to spend her time playing tennis.

“I have the best job at the college,” she said. “It’s meaningful and important work. I really feel blessed to be given the opportunity to have this job.”