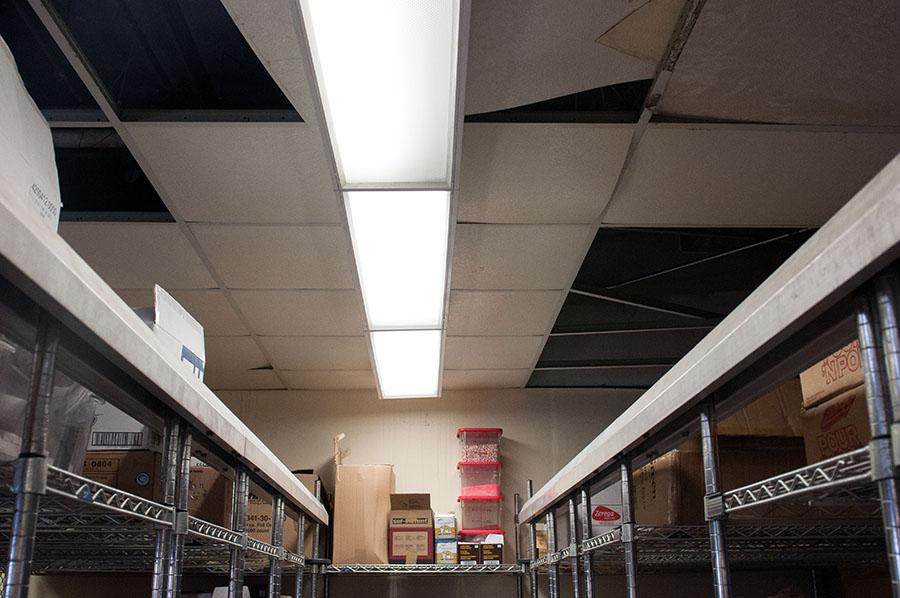 The ceiling in the Culinary Arts Department’s storeroom is collapsing because of water damage in City College’s Campus Center on March 14. City College has received $20 million from the state to reconstruct the Campus Center, since the building’s considered unsafe.

After 50 years of serving students, the Campus Center and the majority of its utility systems are due for modernizing.

“I believe it is a tremendous benefit for the College to replace this aging facility,” said Joseph Sullivan, Vice President of Business Services.

“It will provide a much better learning environment and improved food service venues.”

Students are already excited for the new addition to campus and some even have their own goals to help make it a success.

The Student Sustainability Coalition would like to see “healthier food and composting,” said Ally Arganbright, ecological restoration major and president of the club.

The project is still in its infancy and the funding to begin drawings is not available until after July 2014.

“Its hard to get money from the state,” said Superintendent-President Lori Gaskin. “It [the state] rarely funds to modernize. “

The Campus Center project was moved to the top of the list for funding because of safety concerns over the condition of the structural concrete and rebar of the current building.

“Because of the nature of the project we are only allowed to redesign,” Gaskin said.

Although the new building will bring a much-needed modernization to campus, there are some stipulations that come with the funding.

The campus center cannot be enlarged, nor can the money be used to advance any of the programs it houses.

“Architects are extremely innovative. They can take existing square footage and totally rethink it,” Gaskin said. “That’s why I’m not worried at all. I think it’s going to be a grand challenge for the architects.”

In 2010, Steinberg Architects were contracted by City College for cosmetic repairs to the exterior of the campus center. After their initial assessment Steinberg expressed concerns about the buildings safety.

Further investigation by Steinberg revealed that the $4 million allocated by the school for repairs was vastly insufficient to address the structural and “water intrusion” issues being uncovered.

In 2012, the architects and City College officials presented a report to the Board of Trustees on the estimated cost of renovation or replacement of the building.

The Board of Trustees opted for replacement and a final proposal was submitted in July 2013 to the California Community Colleges Chancellor’s Office.

Funding for the Campus Center replacement project is included in the state’s proposed 2014-2015 budget.

The budget has been scheduled for approval by June 30, 2014.