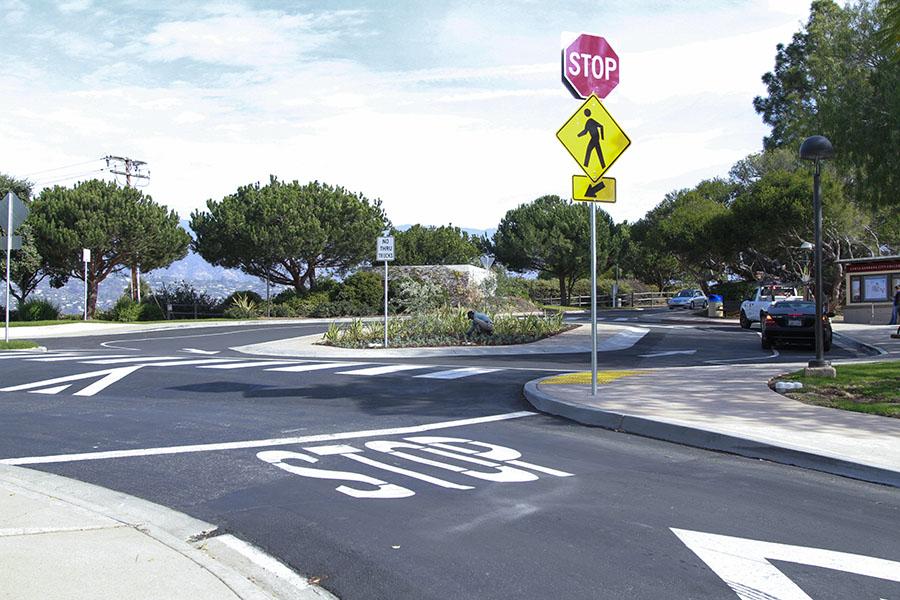 The new roundabout on the East campus gives students the opportunity to get dropped off quickly and easily, getting them right where they need to be.

In an effort to promote traffic efficiency and pedestrian safety, City College installed a roundabout at the East Campus Entrance over winter break.

During the reconstruction, automatic security arms were supposed to be installed at the entry kiosk.

Erik Fricke, head of security, said that the arms weren’t installed because there wasn’t enough space to put them in.

“The reason security wants to have the arms is to divert the drop-off traffic to the newly reconstructed roundabout,” Fricke said. “Another reason for the arms is to slow down cars entering campus.”

In an incident on West Campus, a car struck a student. A campus-wide email was sent Feb. 4, saying that the hit-and-run occurred.

The woman wrote, “my daughter, a SBCC student … was grazed by a car yesterday on West Campus while trying to get to the bus.”

The victim said she talked to campus security after the incident. Fricke said that the email was the first he had heard about it. None of the security officers reported any hit-and-run incidents that day or the day after.

After many close calls of students and staff being hit by cars, City College decided to build the arms while the entryway was being constructed.

When the East Campus security arms are installed, City College staff will be able to use their personal ID to pass through the arms.

The reconstruction of the East Campus entryway started Dec. 16, 2013, and was finished on time without any delays said Julie Hendricks, senior director of Facilities.

Students say that the reconstruction of the entryway has given the campus a better feel.

Even though it’s been an improvement according to drivers, pedestrians haven’t seemed to notice the new roundabout.

Sabac said she thought it was a bit sad that the reconstruction hasn’t been noticed.

Security asks pedestrians to watch out for traffic because of the installation delay. The arms will be installed over spring break.