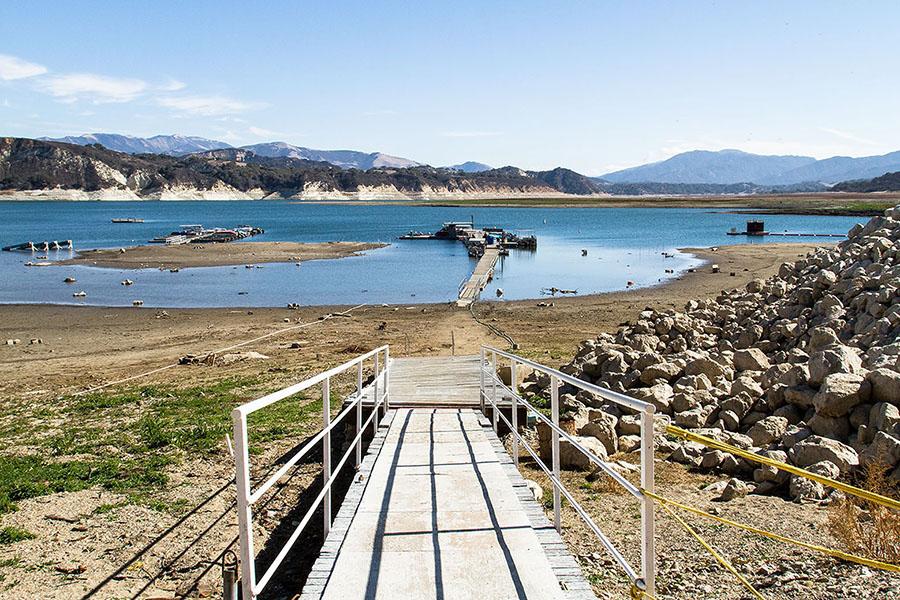 Water levels at Lake Cachuma, Calif. are at historic lows on Feb. 5. The boat marina has had to lower the floating docks past the stair level and lake visitors have to walk through a section of shoreline before reaching the dock.

With the mountain snowpack at 20 percent of what it normally is for this time of year and the state’s water supplies dropping, Governor Jerry Brown has declared the drought a State of Emergency as of Jan. 17.

Lake Cachuma, which provides most of Santa Barbara’s water supply, is only 42 percent full as of the end of January. Even with the help of recent rain, Santa Barbara County has only received 15 percent of the rain it normally would by this time of the year.

“The city and the college are going to be greatly affected,” said Grounds Supervisor Mark Broomfield. “The timing could not be any worse.”

The city of Santa Barbara has already set and approved the shut-off and refurbishing of the reclaimed water system that irrigates most of the city’s parks and schools.

In short, reclaimed water takes wastewater, filters it, and redirects it for irrigation rather than sending it straight to oceans and rivers. Every gallon of recycled water used for irrigation saves a gallon of drinkable water that can be used in homes and businesses according to the City of Santa Barbara Recycled Water Project.

City College, as well as 50 other sites throughout the city, will have no reclaimed water to irrigate their landscape until the project’s estimated completion in August 2016.

Despite facing bad news and bad timing, the college hopes the installation of a 2500 gallon rainwater harvesting tank built on top of the Facilities Shed over winter break will help keep the campus sustainable.

The new tank will act as a natural water reserve.

Instead of replacing the turf lawn between the Campus Center and the new Humanities Building, City College has decided to plant strictly native and drought tolerant species in that area.

“I think this is a step in the right direction for City College,” said Ryan Veasy, a kinesiology major. “I know everyone likes the landscape here, but we need to think about the future.”

City College has been bracing for water rationing by adopting stage-one drought protocols that the city is supposed to enact on March 1. This type of procedure typically calls for water conservation of around 15 percent. Santa Barbara County hasn’t issued a stage-one protocol since 1990.

The College has begun by discontinuing the power washing of all impermeable surfaces on campus, the installation of low-flow toilets and energy saving lights.

Broomfield mentioned in a campus-wide email that the drought and the subsequent water rationing set by the state will affect the campus appearance, but the staff and grounds-crew are committed to helping the school make it through this challenging time.