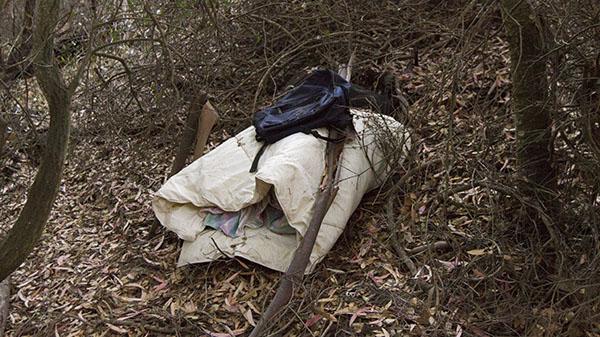 A stashed blanket and backpack at the wooded area on West Campus of City College on Thursday, Nov. 14, 2013, in Santa Barbara, Calif.

Transients in what one official called shocking numbers are using the gully between Harbor Heights Manor and City College’s West Campus as their newest shelter.

Food, clothes, pillows, beds and miscellaneous items litter the grounds, called the gully, grove, or even “the ditch” by City College students. The gully has a steep incline, tall grass and low trees that transients use to help ensure that no one finds them.

The City College crime log routinely features some Santa Barbara vagrants, while others have never caused a problem to the college or its students. The college has been removing the most troublesome transients from Pershing Park at the base of East Campus. Now this grove is giving security officers problems,  as well.

The college discovered the inhabitants and regularly sends the groundskeepers into the woods to remove the transients and their supplies.

“I remember when we used to go down once a semester, said Ground Maintenance Supervisor Mark Broomfield. “Now, we are going down there every two to three weeks. I can fill up a dump truck full of material.

“I was just blown away at how much stuff and camps are down there. They were bringing full couches, beds and reclining armchairs from wherever they could get their hands on.”

Looking up from within gully, one clearly can see the college and bordering apartments.

Dirty blankets, pillows on sleeping boards, bundles of clothes, bags of food hanging from branches, human-waste in the creek ,and arrows shot into a tree all prove that people commonly use this area. On a recent trip to the gully, The Channels tried to interview several transients, but none would speak on the record.

One homeless man, who asked his name be withheld, said he from “out of town.” He said that he was already visited by one of the regular transients staying in the gully.

“I’m just here for the night while I find a spot on Craigslist,” he said.  “But some guy told me not to sleep so close to the open—so I don’t give them away.”

Student Kristoffer Kronander, 21, lives near the gully. He said  he saw a man sleeping near his footpath on two separate occasions.

“We went down there shooting a film, and he came up walking along the wall,” Kronander said.  “He had a mattress and all that stuff on his back, and he set it up.

“I was walking to school, and the same guy was lying there in the morning.”

College administrators said they are doing all they can to keep the area safe and protect students. In general, though, the college puts more resources into helping homeless students, and they have no reason to believe that any of the gully residents .

“It’s an area that we’re aware of … our security does regular sweeps through [the area,]” said Superintendent-President Dr. Lori Gaskin. “I would encourage anyone who is on the edge, in terms of not having adequate housing, to seek out our resources.”