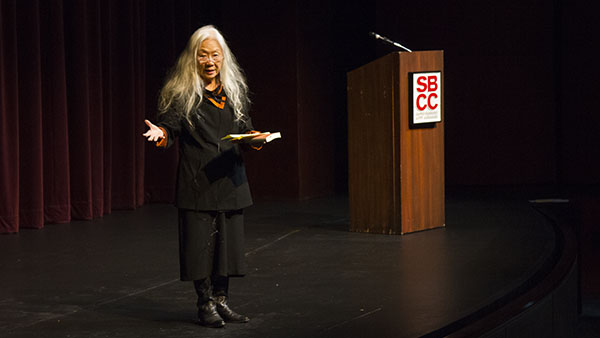 Author and Political Activist Maxine Hong Kingston may be of small stature, but her words can engulf an auditorium of listeners.

As Kingston read selections of her writing at the Garvin Theatre, certain audience members stopped at the top of the aisle to listen to her stories.

The sections described mythical battle-scenes, exposed post-war Vietnam and recounted her arrest at a political rally in front of the White House, all within a one-hour speech.

“I hope that people would be inspired to make peace,” said Kingston. “An act of love I do this morning saves a life on a future battlefield.”

The author and activist has attracted vast acclaim and numerous awards. She was granted the National Humanities Medal in 1997 by President Bill Clinton for her novels and work as a teacher. In 1974 she was given the National Book Critics award for her novel, “The Woman Warrior.”

A collection of nearly 200 fans, teachers and students attended the speech on Friday, Nov. 8. Kingston spoke about her journey through her milestone books, “The Woman Warrior” to “The Fifth Book of Peace.”

She began her speech by reading an excerpt of “White Tiger,” the second chapter of “The Woman Warrior.” This section recounts the myth of Fa Mu Lan. There are many themes in Kingston’s writing that transcend any particular book.

“When you read my entire body of work, I think that you will see in every book there is a war,” said Kingston. “It is mostly in the background.”

She then transitioned to explaining her work as a host at her veteran healing workshops, which she did for 20 years. This workshop brought together veterans from both sides of the war, as well as others traumatized by violence.

In her reading of “Veterans of War, Veterans of Peace,” she describes veterans, who at one time would have shot the other on sight, embracing and accepting each other.

“He looked straight ahead and the tears were falling from his open eyes.” Kingston read. “[He] hugged Quay, ‘Oh precious being alive, unharmed. I almost killed you and I did not. Thank God you’re here alive.’”

She has learned about war from her brothers who enlisted and the countless veterans she has helped throughout her life.

“The ‘ism’s’ now in Vietnam are not Capitalism and Communism,” Kingston said. “They are Vietnamese romanticism and sentimentalism.”

Kingston placed a large emphasis on stopping war before it starts. She has been arrested for her actions as a political activist. She narrates a rally outside of The White House in her book, “I Love a Broad Margin to My Life.”

She spoke of her shattered expectations at the peace rally. She expected the police to assault her and make her disappear. Instead she found, “These police were kind. They would not disappear me.

“They took us to this huge prison in the middle of no-where. It was a longtime when I was in a cell by myself.” Kingston said.  “I thought to myself, oh gosh this feels like solitary confinement… I love it!”

After taking questions, the speech concluded. Members of the audience surrounded Kingston offstage for autographs, questions, photos and praise.

English Professor David Starky was pleased with the turnout and collection of recent speakers that have been featured at City College.

“How many community colleges have Tim O’Brien and Maxine Hong Kingston come two weeks apart? Zero.” said Starky. “We had a couple hundred people on a Friday night of a three-day weekend. That’s pretty good.”