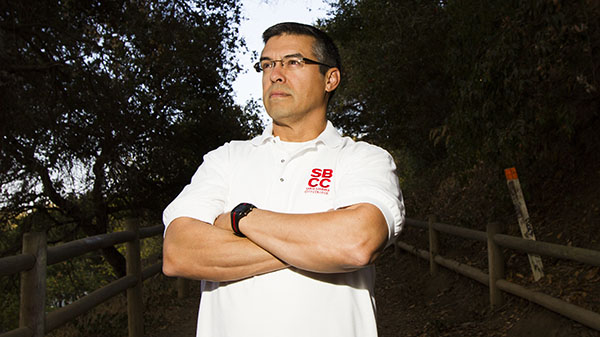 Gary Lytle looks out over Santa Barbara on the pathway behind the Winslow Maxwell Overlook at City College on Sunday, Nov. 3, 2013, in Santa Barbara, Calif.

He dropped his phone behind a fence. The gunman wearing a dollar store devil mask was visibly confused.

The mugger adjusted the mask to get a better look at Gary Lytle.

“Give me your wallet,” said the masked man.

That’s when he started to think, ‘there’s a window behind me, and behind that window is my 3-year-old son’s bedroom. The worst thing that could happen is if he misses me, I go inside, and my son is bleeding.’

Lytle had trained hotel workers to be compliant when being robbed, but he had to take the bullet or hit the nozzle away if the gun fired.

“I don’t carry cash in my wallet,” Lytle said.

This all happened on a night when Gary Lytle, communication major and Sigma Chi Eta president, left work with a smile “from ear-to-ear.” He was playing with a new smartphone app his friend had shown him, when he was jumped.

“Had I not been on my phone,” said Lytle. “I might have been aware of this guy coming up on me with a gun.”

Lytle was the victim of an attempted robbery one block away from City College’s co-owned Pershing Park.

Now, he is determined to warn everyone that robberies can happen to anyone. The day after he was assaulted, Lytle made an announcement in his political science class, which was packed with students.

“I was just held up at gun-point [last night],” Lytle said to the class.

His professor and peers were stunned. He went to every class he had and relayed the same message. He has been interviewed by Noozhawk, KEYT and anyone who would listen to him talk.

“My whole focus was to make people aware. Whatever it is, get the word out,” said Lytle. “Nobody’s immune.”

There have been 31 reports of robbery, 15 robbery investigations and 5 attempted robberies in Santa Barbara. There have also been 102 silent robbery alarms. These reports span Santa Barbara and took place from July 2012 through June 2013.

Sigma Chi Eta plans to host an event that will incorporate teaching students about technology, communication and awareness. The event will take place next spring, so there is still a lot of unknown information.

As president, Lytle is a large part of what happens within Sigma Chi Eta. This is abnormally true because Sarah Hock, the faculty advisor for Sigma Chi Eta is away on maternity leave.

“Gary is doing an outstanding job as the President this year,” said Hock in an e-mail. “He is creative and has enormous potential for success in any endeavor he puts his mind to.”

Lytle regularly volunteers with neighborhood cleanups on the west and east side with his church. He mentors for the Santa Barbara Rescue Mission and was just asked by the Santa Barbara Partners in Education to help give kids mock interviews, for real-world experience. The people who see his work have taken notice.

“It’s what I can do. Maybe I can’t be involved in every event, but it’s all part of life.” Lytle said. “Life is community, life is being involved.”

Many of the people he has helped appreciate what he has done.

“I’ve had people at the restaurant I work at come over and shake my hand,” Lytle said. “One lady came over and gave me a silver medal.”

Lytle wants people to realize that once you’re gone, your family can never replace you.

“Be aware. Don’t think that you’re safe all the time.” Lytle said. “We can’t all just be doing our own thing as individuals.”

If you would like to see the Santa Barbara crime report’s Calls for Service statistics, you can do so here. A list of the different districts is shown here.