City College released the 2009 to 2011 Clery Crime Statistic report Oct. 8 to all students, staff and faculty to inform them of criminal activity on campus.

“Crimes have dropped a little this year,” said Erik Fricke, director of campus security. “But, theft is one of the main problems on campus.”

With petty theft being the most common crime on campus, some students feel like they should put a lock on their backpacks.

“I feel safe on campus,” said history major Kyle Armour. “I would consider a lock on my backpack or laptop case though. I definitely wouldn’t leave my backpack, binder or anything personal just sitting there, that’s for sure. It’s like locking your smartphone so your parents don’t go through it.”

Auto burglary is also a problem on campus. In 2009, there were seven auto burglaries, it spiked to thirteen in 2010 and dropped to six in 2011. There have been three reported auto burglaries this semester.

“I don’t drive to school, but if I did, I would worry about my car,” said Armour.

“Most of the crimes are handled through Student Discipline,” said Fricke.

The report is at a steady zero for both major sex crimes.

“We don’t have campus dorms so we don’t experience those crimes as much as schools with dorms,” Fricke said.

Every school does the report although the laws differ from state to state.

“The purpose of Clery is to inform students, staff and the community of crimes on student grounds so they can make an informed decision as to if the college is safe for them,” said Fricke.

There is a copy of the Clery report in the Security Office, located next to the Student Services Building, across from the water fountain. Campus Security urges students to sign up for AlertU, an automated emergency alert system for students.

If you have any questions about the Clery report you can click here for details or call the Security Office at (805) 730-4064. 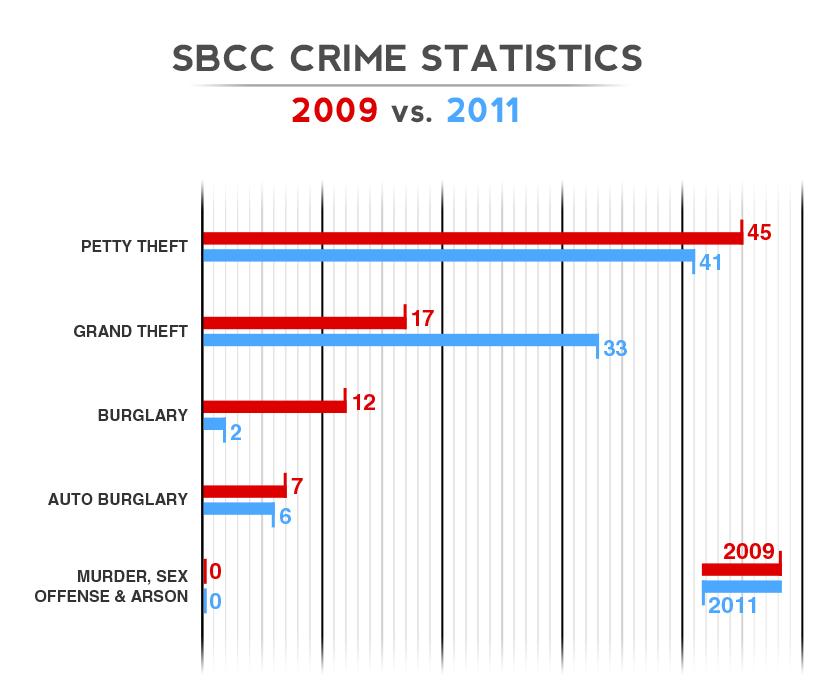