Facing love and life’s snowstorms in a ’96 Chevy 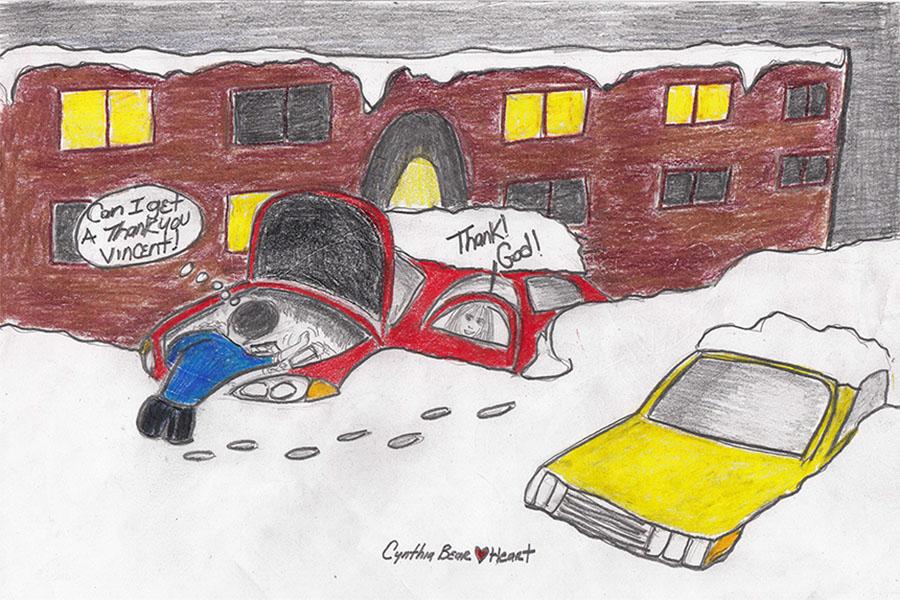 The malfunctioning alarm of a 1996 Chevy Cavalier is a dreadful way to wake up. It goes off randomly and the only way to stop it is to disconnect the battery.

At 17-years-old in an attempt to defy our families and continue living together, my girlfriend and I had the bright idea of sleeping in our luxurious car.

One of the largest storms of the season blanketed a half dozen parked vehicles with snow behind an apartment complex in upstate New York.  All the fresh powder made the night as silent as it was cold.

Like a basketball to the face, a car alarm punctured the silence and woke me.

Panicked, I pried an eyelid open far enough to see.

I pulled a muddy boot over my crusted sock and took a deep breath.

“It should be your turn this time. Pop the hood?” I asked.

I barged through the frozen car door, determined to solve our problem. As soon as I stuck my head into the night, a chunk of snow slid off the roof of the car and down the back of my neck.

Disgruntled, I stepped out of the car and into knee high snow.

The trip to the front of the car was arduous with 50 pounds of unwelcome frozen water caked to the hood waiting for me at the end. The dead weight made it difficult to open.

The still blaring alarm provided me with the adrenaline necessary to raise the hood of the car over my head.

I used a metal rod to support the weight of the hood and knocked a connector off the car’s battery with my fist. The alarm stopped.

After basking in the orgasmic silence for a moment, I noticed lights flipping on inside apartments. I reconnected the battery, slammed the hood closed, and found my way back inside the car.

“I love you, but this is getting insane,” I said.

There was a melancholy silence between us for the rest of the night. We sat and studied cigarette burns on the car’s ceiling until the sun rose.

Over the next few days a series of chemically induced set backs amplified tension between us.

Things went from bad, to worse.

Sooner than later we threw in the towel and went back to our respective families.

This marked the beginning of a very long end between the two of us. When I reflect on this, there’s always the same conclusion.

While we might not want to relive hard times—even the self-inflicted ones—remember not to shut the door on them either.

They are what give us character.