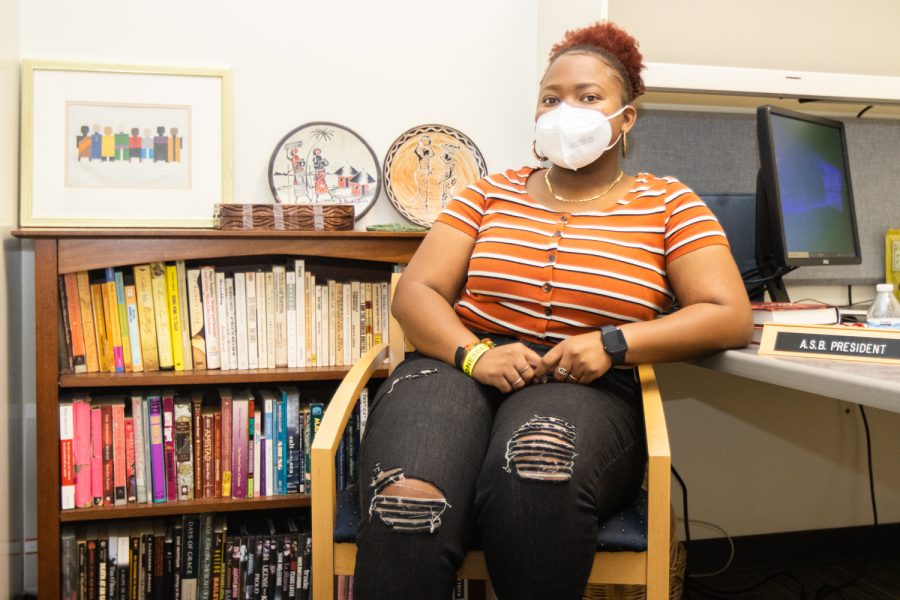 Being the president of the Associated Student Government taught Allegra Kabukapua Kalombo to be a better leader, voice her thoughts, gain more confidence and meet a lot of new people.

To her, City College means growth, passion, community and success. When she first arrived here from Belgium, she saw it had a strong community with so many opportunities to become successful.

“I’ve been a part of the Center of Equity of Social Justice, and I knew that anything I needed I could go there,” Kabukapua Kalombo said. “Even if I don’t work there anymore I can still go and reach out to them and they will have my back.”

But being president has come with highs and lows for the international student.

She first started as the vice president of internal affairs in May 2021 and became president in August 2021.

When she first became president, she received online harassment through emails which caused her to miss her classes, cry every day and not be able to eat or sleep.

“I’ve always been an outspoken person, so for me, it was new to experience harassment,” Kabukapua Kalombo said. “I didn’t even know it was harassment until I talked to Becky Bean.” Bean is the student program advisor at City College’s Wellness Center.

Growing up, Kalombo said she was always taught to hide her weaknesses. Coming from that background made it hard to talk about harassment to her parents and why she wasn’t thriving in her classes.

As soon as she realized that what she was going through was harassment, she knew she had to talk to people about it. Once Kabukapua Kalombo found someone willing to listen, it helped her get through it.

“It changed me for the better because I learned how to be vulnerable,” Kabukapua Kalombo said. “I was never vulnerable before and being vulnerable helped me for the best, now I know the signs when I’m not doing well and I reach for help.”

The ASG president said she also learned how to “own her truth,” which helped her overcome the online harassment and allowed her to know what she stands for.

“Owning my truth has really been the key part of my entire experience. Owning who I am and [knowing] when things go wrong to just express it,” Kabukapua Kalombo said.

On March 30, the ASG held a Zoom event titled “How Women Lead” which featured Interim Superintendent-President Kindred Murillo, Board of Trustees Member Anna Everett and Academic Senate President Raeanne Napoleon. Kabukapua Kalombo called this her “made it” moment.

“Being a part of a panel discussion with these amazing women with a lot of experience in their career, then me a young leader learning from them … it was my “aha” moment where I realized, ‘Oh yes. I’m really the president and it was an honor being there.’”

Kabukapua Kalombo said that one of her goals is to inspire the younger generation like her little sister and bring positivity everywhere she goes because she knows she can make a difference. Originally from the Dominican Republic of Congo, she said she never met a doctor and wants to make a difference by becoming one.

She also said that participating in different clubs and groups on campus opened her mind to many perspectives from all the people she was able to meet, which helped her see life differently.

“Allegra is amazing to work with. She loves our student body, she really wants to help our students and be there for our students,” ASG Advisor Amy Collins said.

Kabukapua Kalombo said the women who have inspired her to become a leader include her mother, Associate Professor and Transfer Academy Coordinator Angela Warren, Interim Coordinator of the Office of Equity, Diversity and Cultural Competency Roxane Bryne, Substitute Equity Student Program Advisor Alondra Lazaro Gonzalez, Executive Vice President Kathy Scott, Special Assistant to the President Joyce Coleman and the previously mentioned Murillo and Napoleon. She said all these women motivate her to wake up every day, show up and stand by her truth.

Kabukapua Kalombo will be going to the University of the Sciences in Philadelphia this fall to further her education in studying medicine.

“It’s a must making a difference every day, everywhere you go, making sure people know your name,” Kabukapua Kalombo said.