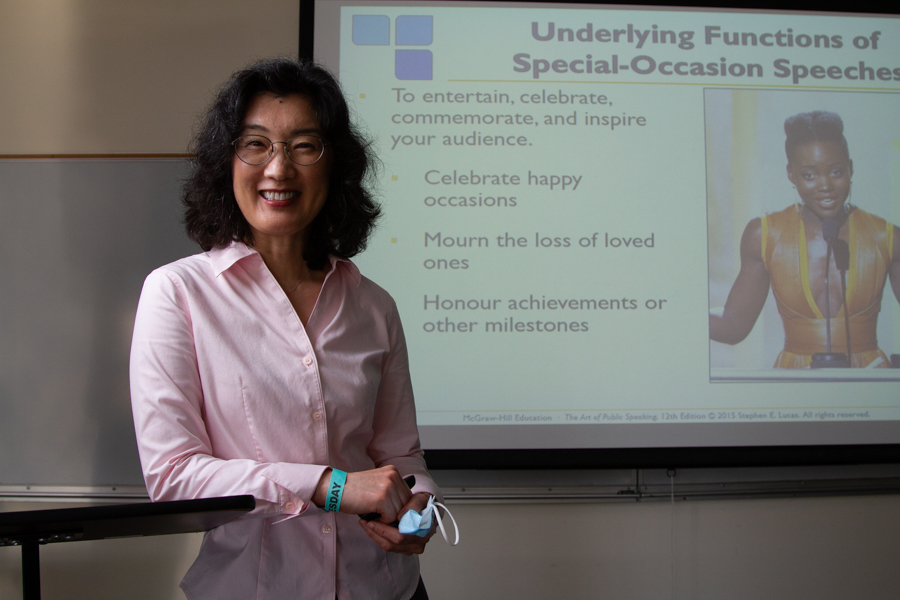 Public speaking Professor Mika Garard poses at her podium in her classroom on Tuesday, Nov. 30 at City College in Santa Barbara, Calif. Originally from Japan, Garard said she loves teaching in Santa Barbara and is thankful to be back to in-person classes.

Room BC222 in the Business Communications Building looks rather unimpressive from the outside, but within, the lively professor who teaches public speaking greets students with a warm smile.

Born and raised in Japan, Mika Garard not only teaches communication classes, but is also co-directing the Summer 2022 Japan Study Abroad Program for City College.

“Part of the reason why I teach is that I love to see students learning,” Garard said. “The lightbulb going ‘bing,’ that is the moment I get very excited.”

The Study Abroad Program was originally planned for 2020, but had to be postponed because of COVID-19. Next year, participating students will stay from June 26 to July 24 for four weeks and experience traditional Japanese practices like tea ceremonies and Zen meditation.

Garard said she enjoyed her first Study Abroad Program in 2018 because she got to look at her own culture from an entirely new point of view while seeing students get excited about discovering and learning new things in Japan.

Beyond teaching abroad, Garard is glad that her public speaking classes were changed to in-person for the start of the fall semester after having been online since the beginning of the pandemic.

She said she believes teachers and students can learn from each other and enjoys getting feedback from her students.

“I get energy from students,” Garard said.

Freshman Katherine Merino, a student in one of her public speaking classes, also said both students and teachers were struggling with online classes.

“It was a very fast transition from online to in-person, but it gave an old feeling of normality,”

Garard originally came to the United States to pursue her communication studies degree at Southern Illinois University, as communication majors were not offered in Japan at the time.

Even though she had to face many challenges, like difficulties learning the language or discrimination when first coming to the US, she cannot imagine moving back to Japan anymore.

“When I go back to Japan, I feel a little bit like a stranger,” Garard said with a laugh.

After receiving her master’s degree, she first started working as a translator in Kentucky. Then Garard came along as a part-time instructor when her husband got a job at City College, not knowing she would eventually become a professor.

Now, the Japan-native teaches communications classes, including public speaking, and is especially delighted with instructing in person again.

“Professor Garard’s teaching style is great because she gives us examples and helps us with every part of the speech,” Merino said.

“[Garard] tries to give everything her personal touch,” Merino said.

Garard has enjoyed the “light bulb moments” in her classes this fall, and is looking forward to teaching students with an even more personal touch about Japan over the summer of 2022.