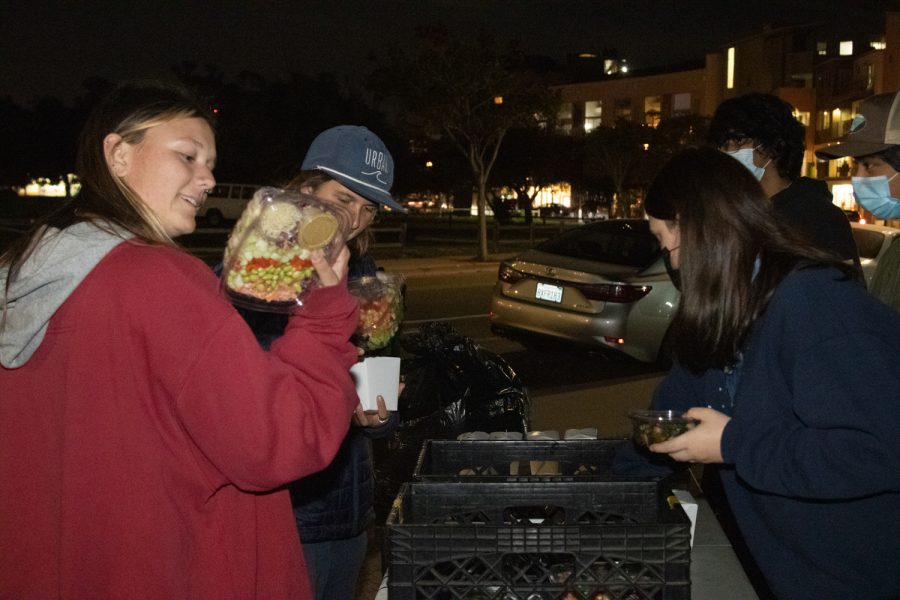 From left, UCSB students Hazel Johnson and Sarah Olsen admire the selection available at the distribution from Food Not Bombs Isla Vista on Wednesday, Nov. 17 in Isla Vista, Calif. Mediterranean and Thai-style salads were given that night, as well as vegetable stew and rice.

Through COVID-19 and community crises, Food Not Bombs Isla Vista continues to support its local neighborhood through unprecedented times with delectable acts of kindness.

The grassroots organization prepares and provides free vegan meals available to anyone in need. The Channels previously reported on the group assisting the homeless during the beginning of the COVID-19 pandemic in the spring of 2020. While still offering meals for the homeless, the organization has also focused its efforts on helping the hotel-housed UCSB students.

“We shift to the community’s needs,” said Food Not Bombs member Joshua Buendia. “Whether that’s with COVID, housing or whatever else may happen.”

Isla Vista is one of several areas in Southern California suffering from a housing shortage. With City College students vying to live in the idyllic university town, along with those from UCSB, an environment has been created where multiple students must room together in order to pay for rent and utilities.

International students attending UCSB were unsure whether they were able to enter the US and attend in-person classes since protocols for COVID-19 were unclear and there were difficulties receiving travel visas.

International UCSB student Julian Broadbery told The Channels of his journey from Copenhagen to Santa Barbara, including having to go to Paris to receive a visa since the American Embassies around him were closed.

Broadbery came to the United States without knowing where he was going to live. He said UCSB’s housing administration was unresponsive until about five days before the beginning of the fall quarter, where the college offered a hotel room for him to lodge in.

“When I got the contract and found out where I was going to live, it was a relief,” the Denmark-native said. “It also felt a bit wrong that it was such a big relief because I shouldn’t need to worry about this and I was also left on my own because my own university told me all contact had to be made through the administration here.”

Broadbery continued saying that he had no point of contact and that he felt “left in the dark.”

Broadbery and fellow international student Diego Zahnen, who also resides in a hotel, frequent their friend’s apartment on campus to feel some semblance of a normal life.

“I feel lucky because I found friends and we can cook together and do things together but if I wouldn’t have that it would be so much worse,” Zahnen said. “I miss the kitchen, but I appreciate [Food Not Bombs] because it’s nice food and healthy food.”

Apart from hosting distributions every Wednesday and Sunday from 5:30 p.m. to 6:30 p.m. at Little Acorn Park, the organization also devotes itself to bringing meals door-to-door to students in hotels.

On Thursday, Nov. 18, the group served around 90 meals to four hotels including the Ramada, Kimpton, Pacific Suites and Best Western South Coast Inn.

“I couldn’t believe it in the beginning. I was overwhelmed by how nice the people are,” Zahnen said. “I can’t believe it’s for free and they’re coming to the hotels. The support has been amazing.”