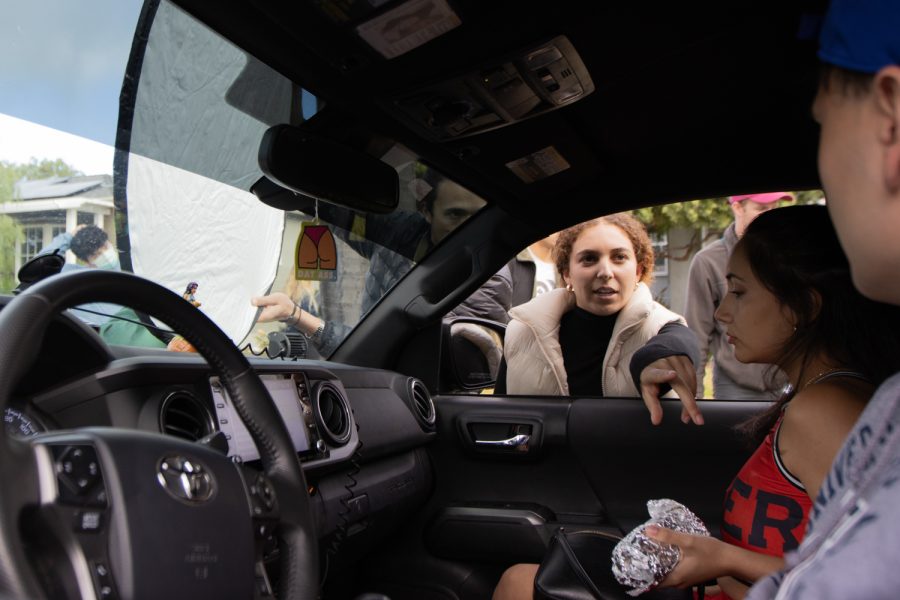 Director Irelyn Wesley explains to her actors what she wants from their performance on Saturday, Oct. 23 in Santa Barbara, Calif. Wesley didn't like the way the light hit her subjects, so she had a crew member hold up a canvas to bounce the light onto them.

Catherine Quinn, film student and co-president, describes the community as “a collaboration between students,” not directly related to City College. This group provides students with an insight into areas that may interest them.

“Students are able to connect outside of class, get on sets, and learn from speakers,” Quinn said.

The club is basically a catalog of students, connecting those wanting to produce a film with departments and contacts that will help create a successful production. Students use the group’s Facebook and Instagram pages to collaborate on projects.

Although the community is student-run, advisors are available for help.

“We do reach out to some professors for certain resources, even the theatre department gets excited to help us out,” Quinn said. “But when it comes down to running [the community], securing speakers and solidifying resources, that’s all student-run.”
The Film Community hosts workshops to guide students and teach them a variety of ways to produce films. Organizers select the workshops by listening to what students struggle with.
“We’ve had a lot of students interested in directing or photography positions, but they’re inexperienced in the camera realm, so we’ve had technical camera workshops,” film student and co-president Asiana Weddington said.

Workshop speakers are often alumni of the Film Community who have worked on sets and in the industry.

“[They’re] a great resource because they’re more willing to help students since they’ve been in the same position,” Weddington said.

“We’ve been surprised with how many people, not even [alumni] but in the professional world, are so eager to talk to students and share their knowledge,” Quinn said.

Due to the pandemic, workshops have been over Zoom, but this year they will have in-person opportunities as well.

Students have access to many resources through the group, including a catalog with around 50 contacts for potential help with their projects.

“When we do in-person networking events or have guest speakers, we have some crossover with students that study film at UCSB or Westmont, which has been really cool,” Quinn said.

Anyone learning film in the Santa Barbara area is welcome to join, not just City College students.

“We’ve seen people join the community, and then start taking film classes [at City College],” the film student said. “Anyone in the community has access to the catalog. If they want to build a crew, they can refer to that and contact who they’d like.”

The online organization not only builds bridges to fellow filmmakers but also gives students hands-on experiences on set.