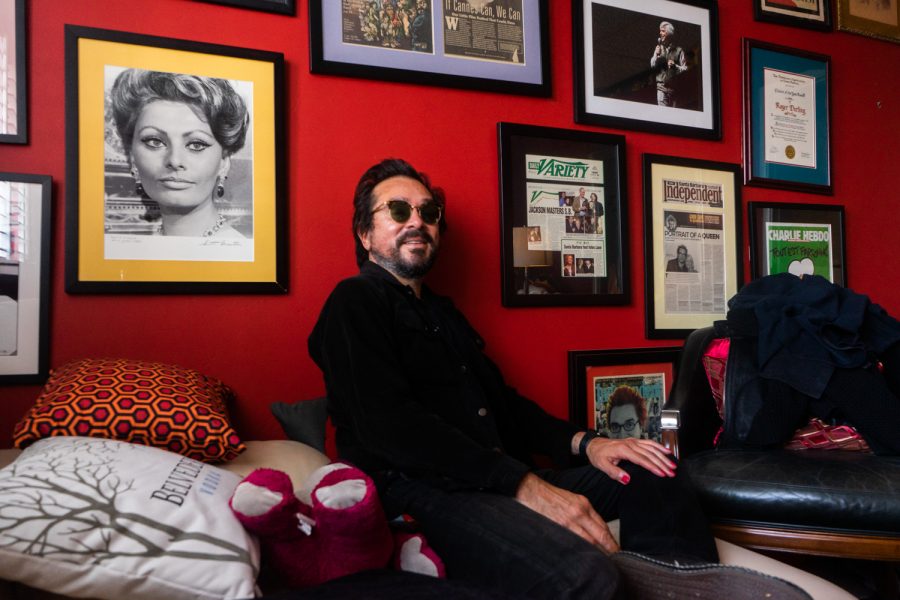 Roger Durling relaxes on the couch where he does most of his work for the Santa Barbara International Film Festival on Sept. 23 in the festival's office in Santa Barbara, Calif. Durling is the executive director for the festival.

What started off as daily emails and newsletters are now organized into a coffee-table book, “Cinema in Flux.”

“I started writing emails when we were sent home on March 18th, [2020]. I thought people were going to be spending a lot of time at home, and I thought maybe they would need guidance on what movies to watch,” Durling said.

Durling explained what prompted him to start sending out the film recommendations.

“The first email I sent out, I was told we were only going to be sent home for two weeks…. Little did I know I would be writing those emails for a year plus,” he said.

Two years ago, Durling worked with Alfonso Cuarón, director of “Roma” (2018), putting together a photo book for Cuarón’s film.

The company that published Cuarón contacted Durling, asking if he had thought about compiling the reviews and movie suggestions he’d been sending out and creating a book.

“I said people have suggested it, but I had no idea how it would look or how to go about it… I didn’t want it to be just a movie guide. I’d want it to be more visual, kind of like a celebration of what we had gone through this past year,” Durling said.

“Cinema in Flux” was published independently by Roger Durling and SBIFF with the help of Print-New York. The book contains a timeline of current events that occurred over the course of the past year, along with film titles that he believed related to whatever was going on in the world.

“The professor in me thought it was important to have movies that needed to be seen, and my choices were being affected by the news,” Durling said. “If you look at the section from June and July in the book, I spent about a month suggesting films that deal with African American history.”

Durling used his eye for film to help readers better understand current events by connecting them to certain movies.

“I thought it was important to use the timeline so you would see the movie recommendation and how it fits in the big context of it all,” he said. “I wanted the book to help people navigate through the uncertainty we were living in”.

In the book’s timeline, Durling suggests films related to the deaths of Justice Ruth Bader Ginsburg and actor Chadwick Boseman, connecting movies with current events while bringing attention to their legacies.

Out of all 300 entries included in the book, Durling could only choose 124 films to write about in thorough detail. He decided to include female directors, African American voices, and classics in this selection.

“It was about inclusivity and representation. That was done very systematically to make sure there was enough room for everybody at the table,” he said.

Aside from helping with the “Roma” photo book, Durling had no prior experience with publishing a book of his own. He is interested in writing a textbook related to film, and would enjoy writing another book after his experience with “Cinema in Flux.”

Although Durling is a great film devotee, he has no interest in directing one.

“My whole purpose in life is to celebrate films, to introduce people to film… that’s why I teach, to make people aware of the impact of the arts,” he said. “Film is my passion.”

When asked what he looks for in a film, Durling explained how he just wants to be engaged. “I like seeing other perspectives and I love seeing common ground.”

“Cinema in Flux” will be available in bookstores in October, and is available for pre-order through the SBIFF website.