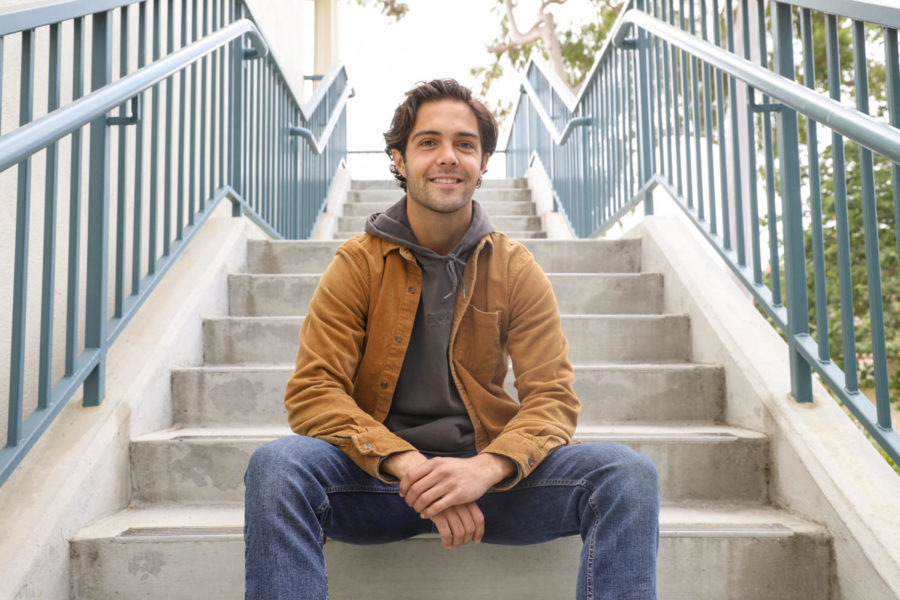 Cameron Olandt, the 2020-2021 recipient of the The William Olivarius Biology Scholarship on the steps of the Physical Science building on April, 22 at City College in Santa Barbara, Calif. Olandt said he did not expect to receive the scholarship, but that he is looking forward to the opportunities it will help provide.

When Cameron Olandt was asked to come into lecture on Monday, March 1, he had no idea he’d end up stammering and speechless in front of the class.

Professor Blake Barron brought up a description of The William Olivarius Biology Scholarship, the oldest offered scholarship at City College.

“Blake… described the attributes and traits that an individual awarded with the Olivarius scholarship would possess,” Olandt said.

Then, “out of nowhere” he was shocked to see his name on the screen in front of the entire lecture announcing him as the winner and was asked to say a few words.

The William Olivarius Scholarship is awarded to students who have declared a major in one of the life sciences and are pursuing an associate’s degree from the biological sciences department.

“This scholarship will assist with my education, and my endeavor in reaching my personal goals of becoming a physician by supplying financial assistance,” Olandt said. “For that, I am greatly thankful for Blake Barron, Jennifer Betancourt, and other members of the committee that chose me for the scholarship.”
Barron commented on how Olandt “possesses one of the most scientific minds of any of the students” he has known, whose “raw intellect is combined with a warm and thoughtful personality.”
Recalling his first encounter with Olandt, Barron said he was an exceptional student in his animal biology course, and eventually was hired to be a tutor for biology 102 and 103.

“Cameron is a deeply knowledgeable, devoted, detail-oriented tutor with an ability to effectively connect with fellow students and increase their success and command of the course content,” Barron said.

Despite his initial shock, Olandt said he discussed how his “desire to succeed in coursework began with animal biology, Blake Barron, and the tutors for the class.”

He gave advice to the students in the lecture that progress is better than perfection, and to continue to refine the study system that works for you to ultimately succeed.

“In entirety, being awarded this scholarship means so much more than money,” Olandt said. “I am so thankful for the experience [being] a tutor and student at SBCC.”

Olandt has been on the President’s Honor Roll every semester he’s attended City College.

After City College, he plans on earning his bachelor’s degree in biology and then pursuing a career in research or medicine.