Batting cages by day, music venue by night: a look back at ‘Funzone’ 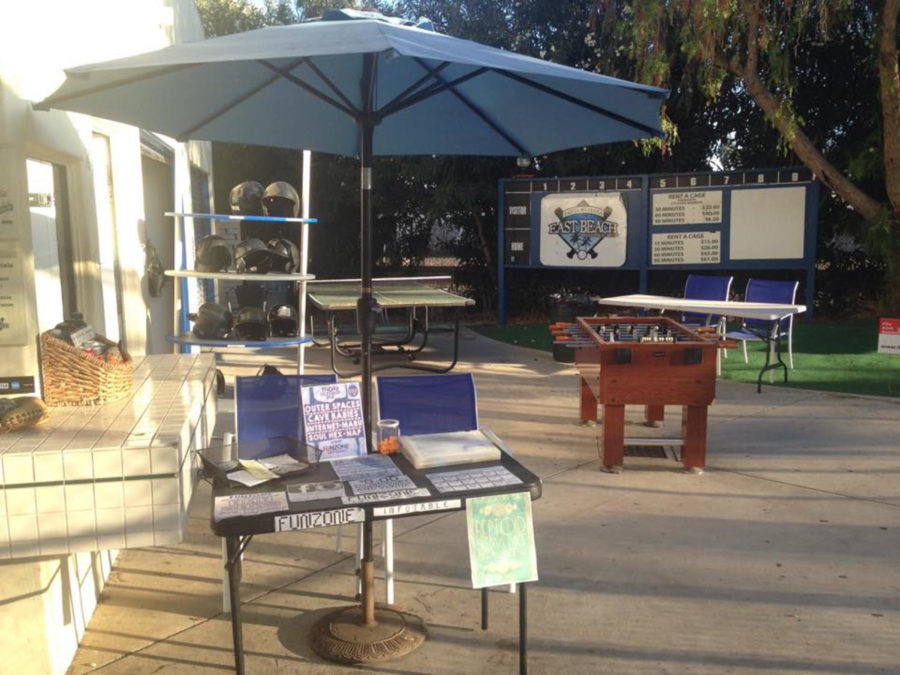 Funzone at East Beach Batting Cages set up for a show on October 23, 2014, in Santa Barbara, Calif. Image courtesy of Spencer vonHershman.

Joshua Redman sat at the back of the batting cages holding a ukulele, waiting for the crowd of teenagers and young adults to join him for the last music set of the night on Friday, October 13, 2017.

It was the final show hosted at one of Santa Barbara’s last all-ages, drug and alcohol-free music venues, the Funzone.

Across the three years it was active, the space hosted over 170 shows with local and touring bands from over 25 states and 12 countries.

“Funzone is probably the biggest coincidence of my entire life,” said Spencer vonHershman, who first opened up the space for music in 2014.

While browsing through Craigslist job listings, he saw a post for the East Beach Batting Cages. He became the only full-time employee at the place and soon discovered the small room that was previously an arcade.

The room held nothing but an inflatable couch and a mini fridge with a few drinks. The walls were covered in mirrors.

“This is a weird business next to the train tracks where no one would get bothered,” vonHershman said. “Maybe I can do a show here.”

With the help of a few friends, he slowly transformed the room with disco lights, a projector that played “Gumby” during shows, and the signature crocheted Funzone banner that hung behind the bands. Over time, the remnant mirrors on the walls were hidden by flyers.

“It was made out of trash basically,” he said.

As a teenager, vonHershman would skate around town and save up lunch money to go to any local shows he could.

“There was years of my life where I could go to two or three shows a week,” he said. “I was able to see so much music at a time when that was all I was interested in.”

From 2004 to 2009, he’d attend $5 shows at Casa de la Raza, Biko Garage, the Hard To Find, Pink Mailbox and more. Some of those shows were booked by Redman, who would later help run shows at Funzone.

Over time, those spaces became less active or non-existent as music venues.

He wanted to bring the spirit of his teenage memories of those shows back to Santa Barbara.

Attendance at Funzone ranged from five to over 100 people. Redman and vonHershman went to nearly every single event.

Redman frequently brought an audio recorder to make bootlegs of the shows. He keeps the recordings on his blog.

“Random people get in touch with me and tell me that they stumbled upon it,” Redman said. “Maybe in 150 years people will rediscover it as an important archeological find.”

The do-it-yourself nature of Funzone gave opportunities to young bands and artists of all kinds. Art shows, film screenings and workshops were all hosted there too.

Redman and vonHershman recall putting on a noise music festival that ran for 24 hours, The Drone Zone Fest.

“I remember being there for most of it, but I think I was just asleep in the corner most of the time,” Redman said.

Bands were booked via Google Spreadsheets and people flowed in and out all day, meanwhile the batting cages were operating just a few feet away.

“It was such a bad idea but I’m so glad it happened,” vonHershman said. “It ended up being essentially like an insane social experiment.”

For those three years, vonHershman got into a routine of working at the batting cages full-time during the day and staying after-hours to run Funzone for the community.

Accompanied by the same friends who helped him grow the space, he threw one last show with baked goods, stickers, posters and more random stuff to sell and give away.

“Funzone was just a random room at this place I worked,” vonHershman said. “One of you works at some weird place, and all you have to do is ask someone if you can do a music thing.”