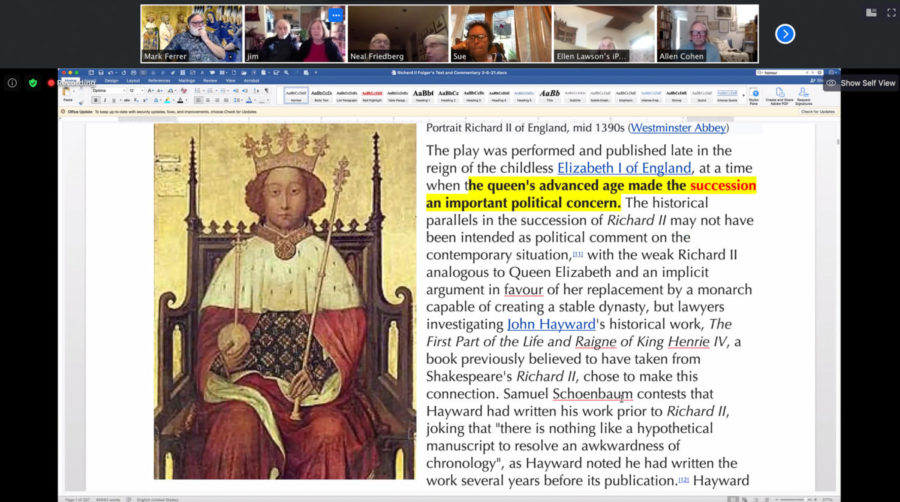 Professor Mark Ferrer introduces King Richard II, the star of Shakespeare's play of the same name, to his Adult Education literature students on March 8, 2021, over Zoom. Ferrer lectures for about an hour before they start a new play, then the students take on the character roles and read it line by line.

Professor Mark Ferrer signed into Zoom on March 8 as a new man with a new Zoom background. Behind him, a medieval painting with golden framing and religious prominence—a detailed display of saints, angels and a doomed king.

It was the first week of a new semester of City College’s Adult Education program at its School of Extended Learning. Ferrer teaches several classes, but tonight is all about Shakespeare and his representation of the melodramatic King Richard II.

“First I’ll try to give you some background without killing your enthusiasm,” Ferrer said to the attendees who chuckled in response.

The majority of the 20 students are over the age of 55 and are already familiar with each other, joking and catching up as they hassle Ferrer into making his shared screen larger. He doesn’t spend all two hours lecturing, volunteer readers voice each character as they work through the play, line by line.

Semesters bleed into each other. Nearly four years ago, it took several just to finish “Hamlet.” But Ferrer said if you can focus on one of the most “profound” pieces of literature, “that’s not a bad place to be for a year and a half.”

“These are deep readings,” Jim Lynn said, a retired City College library clerk and instructor who is now enrolled in the Shakespeare class. “We love it.”

Adult Education is part of the School of Extended Learning funded by the state and free for anyone over the age of 18. Some classes are available for credit, but there is also a robust list of nearly 200 non-credit courses available, from stained glass to meditation.

“If you had a fancy for pottery, you could be a potter,” Ferrer said.

Although the pandemic shifted classes online and made certain things difficult to replicate online, instructors and students have both found hidden benefits in Zoom.

Ferrer said he doesn’t have the best hearing and it can be tough to follow in a large classroom, but the internet has allowed him to hear and see everyone clearly.

Dave Richo, who helps teach a poetry class with Ferrer, has been enjoying the shift to online instruction.

“I like the fact that people seem to feel comfortable in their own homes,” he said.

Adult Education is an option for people to pursue interests that might’ve been pushed to the side throughout the years. Now that they have free time to focus, the educational environment can be encouraging.

Holmes is enrolled in the Writing Personal Histories class and another in English literature, where they are reading George Eliot’s “Middlemarch.” She is able to dive into the dense novel in a way she couldn’t when she was working full-time.

“In today’s world there are so many distractions,” she said.

Ferrer echoed the same sentiment and said that it’s one of the biggest draws of Adult Education.

“That’s what you do in adult education,” he said. “You pay attention in ways you didn’t have time for.”

With the Shakespeare students, he said, many read his work in high school and weren’t ready for it but now “they want to come back to it.”

“What you get out of him is how large a bucket you bring,” he said. “Inexhaustible resource.”