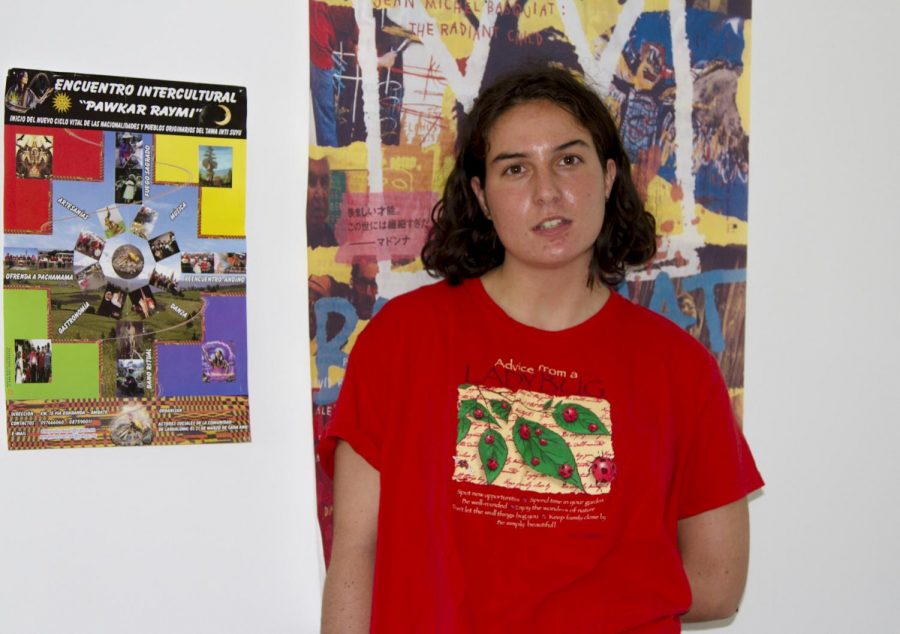 Ili Levine stands in her home next to a picture from the traditional ceremony she participated in during her trip to Ecuador, on Nov. 4, 2020, in Santa Barbara, Calif. Levin started her non-profit Ayudantes International after a trip to Ecuador last year where she witnessed how many people could not afford to feed their families for the day.

When City College student Ili Levine heard that the family who fed and housed her for six weeks was considering killing their cow as a last resort for food, she felt like she had to do something.

“It was definitely one of the most helpless moments I can remember,” she said.

Levine took a cultural immersion trip to Ecuador in the summer of 2019 and stayed with a native Andean family who sold milk from their goat and cow at a local market.

Levine and the friends she made during the trip tried to get in contact with the family, worried after reading about bodies being abandoned on the street in Guayaquil, Ecuador when the pandemic started.

“I spent a week trying to contact them,” she said. “The first thing they asked was how I was doing.”

The market — where the family sold milk — closed down, and Levine’s host-dad lost his job as a taxi driver. The family was quickly running out of food, could no longer make a living off of the cow and was thinking of eating it.

Levine, Drew Kendall, Tadhg Martinez and Kirsten Chaplin started a GoFundMe to help them and other families buy groceries. They deposit the money directly to Walter Castillo in Ecuador who buys food and bikes to deliver it to families in need.

“I can’t overstate how important his role is,” Levine said. “He’s biking eight hours at a time.”

Castillo is a refugee from Venezuela who lost his job during the pandemic. His parents also use the money to buy and deliver groceries to families in Venezuela.

Levine said the GoFundMe “snowballed” into becoming a nonprofit that they call Ayudantes International. They have raised over $5,000 and are making over 65 deliveries every month.

“I don’t feel bad about spending the money that we get,” Levine said. “People are going to starve to death if we don’t.”

They buy rice, eggs and other “cheap, protein-rich” foods to distribute, she said. Sometimes they buy other necessities like diapers with their own money.

“Food is more dire than diapers,” Levine said. “Which is kind of morbid.”

Castillo sends Levine and the other founders pictures of the families he delivers food to. Levine said it can be daunting when the families look a little skinnier every month.

Ayudantes International is now focusing on getting more donations to be able to feed more families every month.

“I already felt indebted to them when I left so to hear that they were struggling in such an enormous way made me feel so helpless and angry,” Levine said.

Right now they find families in need through word of mouth and neighbors sometimes pass along their food if they are doing well that month.

“There are a lot of people who could use a lot of help,” she said.