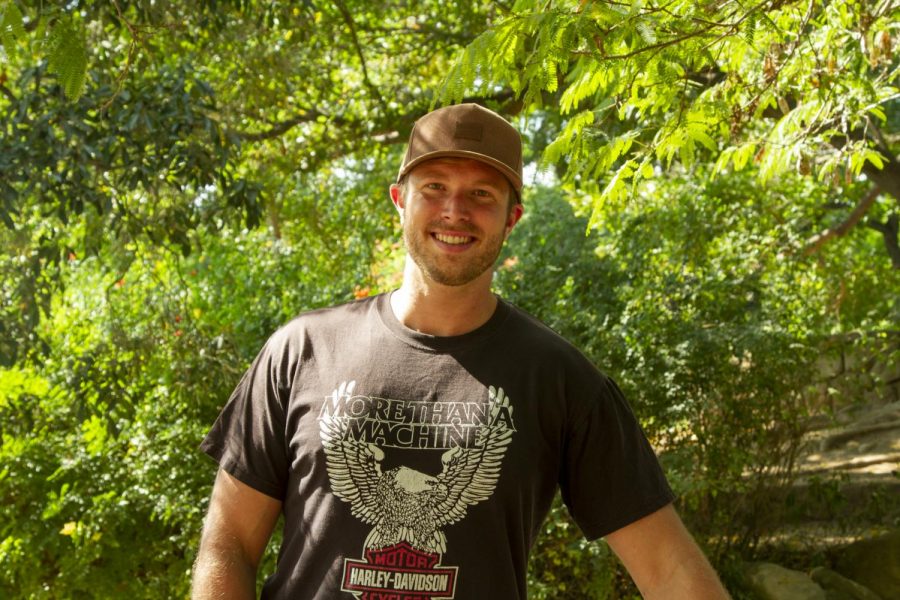 Hailing from North Carolina, Brian Ware originally planned to make his way across the country for the West Coast to live in Washington, but now finds himself living with his friends from their shared time in the Navy. Following through with their plan to go to college, and live together once they all got out of the U.S. forces. Ware is enjoying his time in Santa Barbara so far and relishes the weather at Alice Keck Park Memorial Garden on Oct. 6 in Santa Barbara, Calif.

The call to adventure came to a 20-year-old Brian Ware when he stopped by his local military recruiting office while at the mall with friends in North Carolina.

He signed up for a job within the week.

After nine years worth of experiences around the world as a Navy serviceman, Ware once again faces a new challenge starting remote classes at City College.

“I was skeptical about going to college at almost 30 years old,” Ware said. “My good friend… knew that Santa Barbara was a really good area and that the City College was one of the best in the country, so we decided to start here and then transfer to a University.”

Ware worked as an aircraft mechanic in the Navy, earning the rank Petty Officer Second Class over the course of his nine-year term of service at the time he was discharged.

He was first assigned to a helicopter squadron for six years. Missions included deployments to the USS Eisenhower and USS Truman. Then he spent nearly three years stationed at air bases in Clark, Philippines and Okinawa, Japan maintaining aircraft hydraulic, pneumatic, and landing gear systems.

After completing his tour of duty Ware worked as a commercial airline mechanic in Tucson, Arizona where he waited for buddies to finish their deployment. Then Ware and his friends Eric Schweitzer and Tyler Twiford, a Palm Springs native who knew about City College, decided to meet up in Santa Barbara.

Now enrolled, they are three of the approximately 220-230 veterans and veteran dependents the City College Veterans Support and Resource Center are assisting this semester.

“[Our] main focus is to help veteran students and dependents of veterans process and support their paperwork here at the school,” said Veterans Services Coordinator Kyle Rasmussen, a veteran and SBCC graduate himself. “A lot are unsure how to use benefits, so we help guide them through those processes, and we also help them with other needs on campus.”

Adjusting to life as a City College student taking classes online has taken time, but Ware now feels comfortable with it.

“None of us knew how to use Canvas and the coursework submissions stuff, but now that we’re up to par on that we can grind out all of our school work so we can go to the beach on weekends,” Ware said.

Veteran students can also take comfort in the passing of a new law that extends COVD-19 rules for veteran education past December 21, and ensures full benefits, according to Rasmussen

“It would be well worth your time and effort to reach out,” Ware said. “They have helped hundreds of other veterans do the same thing, so whatever question you have they can answer it and get you in the right direction.”