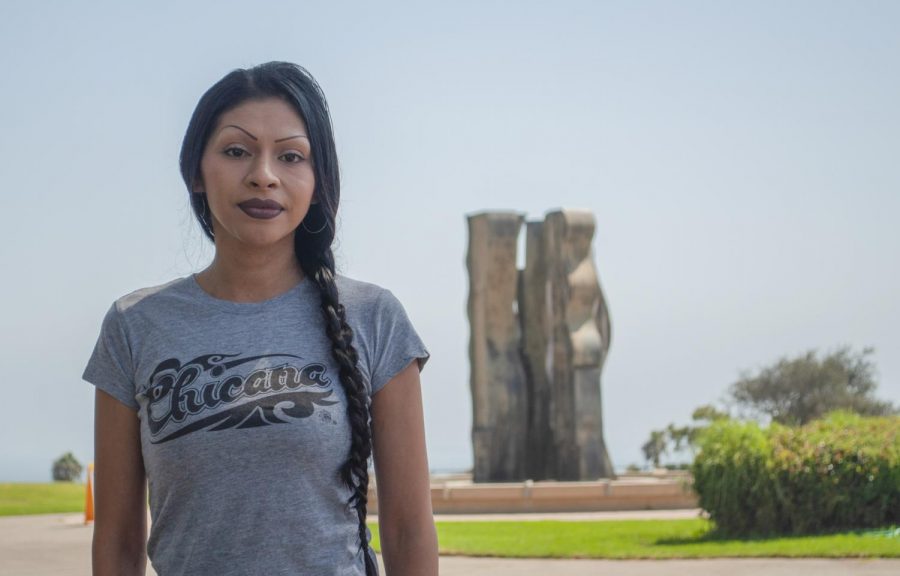 Alondra Lazaro Gonzalez, the new substitute Student Program Advisor for the Center for Equity and Social Justice, stands outside the Luria Library at City College on Sept. 23, 2020, in Santa Barbara, Calif. Gonzalez feels ready to take on her new role and feels an emphasis in pressure to do so during the pandemic.

When Alondra Lazaro Gonzalez was five years old she had to become the voice for her parents, who had immigrated to the U.S. from Mexico and spoke little English.

“I recall having to translate and fill out a lot of applications for my parents,” she said. “It taught me right to help others.”

Now as the substitute Student Program Advisor for the Center for Equity and Social Justice, Gonzalez finds herself as a voice connecting City College students to available resources on campus.

“I try as much as I can to send out the vibe that I’m understanding,” she said. “I’m willing to work with not only those that understand English, but the Spanish-speaking community as well.”

Gonzalez said translating for her parents motivated her to pursue a major in Spanish and get a better handle on the language she grew up with.

“To this day I’m learning words,” she said.

Gonzalez graduated from City College in 2016 and said she feels like she can understand a lot of the struggles of students from different backgrounds, whether they be first-generation or students from lower-income homes.

Her first campus job sparked curiosity in the school’s programs and resources that could help her and her peers achieve their goals in college.

“Nobody should ever feel ashamed to ask for help,” she said.

Not being very adept with technology herself, Gonzalez relies on her student staff to help her with media beyond emails.

“[Students] get bombarded with many many emails a day,” she said.

She worries about students being able to find all the same resources they need to build a thriving community in a virtual space now that classes have been moved online for the remainder of the semester.

Gonzalez is intent on making the most of the online semester and is looking forward to when the Center of Equity will be able to move from west to east campus.

“Being the [Student Program Advisor] for the Office of Equity is like a dream come true,” she said.

Graduating from City College took Gonzalez 13 years. She said being part of a “certain lifestyle” of crime and substance abuse stood in her way.

“That’s 13 years of a lot of failures but a lot of success,” she said. “It was very rewarding to walk that stage.”

Having her first child was her wake-up call, and Gonzalez said she wants to inspire her kids to pursue higher education.

“I smile more than I did before my daughter was born,” she said.

She learned more about her family history of sacrifice and perseverance when she took a Chicano Studies class and was asked to interview her oldest living family member.

She found out her grandparents were manual laborers from Mexico and worked in the U.S. through the Braceros Program during World War II, inspiring her parents to immigrate.

“It’s a great amount of pressure,” she said.

She has learned to embrace her past and said she feels confident about the work she is doing.

“I hope I inspire others.”