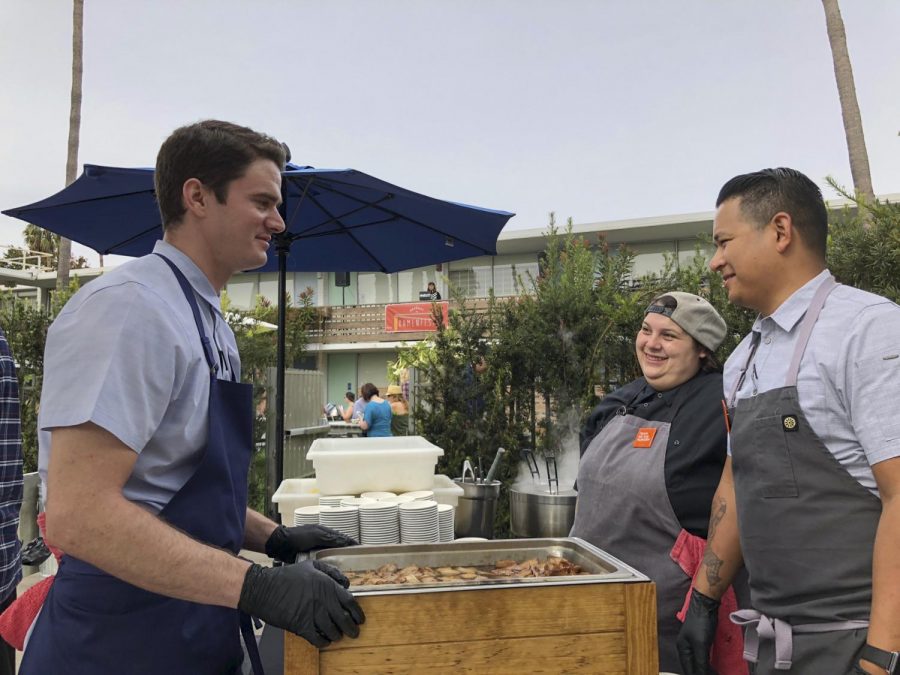 Courtesy image of Elijah Klein (left) and co-workers Dani Morales (middle) and Peter Cham (right) won second at the Ramenfest competition on Nov. 2, 2017 in Santa Barbara, Calif. Klein and over 20 co-workers were furloughed early in the pandemic with only two having returned so far.

The qualities that make a great chef go beyond having the skills to prepare food.

It takes leadership, confidence, endurance and imagination to be able to navigate through the chaos of a busy kitchen, and it’s those same traits that help a student find success in the classroom.

After working as a cook in the Santa Barbara area for nearly seven years, Elijah Klein was furloughed along with over 20 coworkers when the pandemic hit, and now he’s starting from scratch— returning to school and taking classes online at City College.

“I can’t imagine there’s only one thing that I’ll really like doing,” Klein said.

The abrupt change brought by COVID-19 gave him the chance to take a step back from the kitchen and reevaluate what he really wanted for his future.

Although he enjoyed being a cook, he said working 14-hour days six days a week was beginning to consume too much of his time.

“You miss out on doing a lot of things, and a lot of other aspects of life,” he said.

When Klein first attended City College, he didn’t know which direction to take. He said he essentially took “random classes to appease” his parents, choosing the most interesting and least intensive.

“I wasn’t interested in anything else, or anything really, except I liked food a lot,” Klein said.

Culinary arts was the program with all the right ingredients.

“It was just fun,” he said. “I just didn’t enjoy sitting in a classroom and listening to someone talk.”

Students in the program dove right into cooking. They wore chef’s whites and bought personal knives. Class time was open for creativity and engagement.

Klein left the program when he got a spot in the kitchen at Finch & Fork. It didn’t seem necessary anymore since his new job would teach him what he needed to know—and he would be getting paid.

But after being promoted to sous-chef, he was only cooking half as much and the challenges took a new form.

“The hardest part of being a chef is managing other people,” Klein said.

Work schedules made it near impossible to see friends or hold romantic relationships. His energy would be drained to the point that everything else seemed like a chore after coming home from a long day.

“It’s not like I can’t cook still,” Klein said.

His love of food and cooking is still strong, and he said he doesn’t need the professional kitchen to enjoy the sticky rice of khao soi, or to cook Japanese food with his girlfriend.

For now he plans to continue with remote learning at City College, navigating through the unknown and using his experience to succeed again and find a new passion.