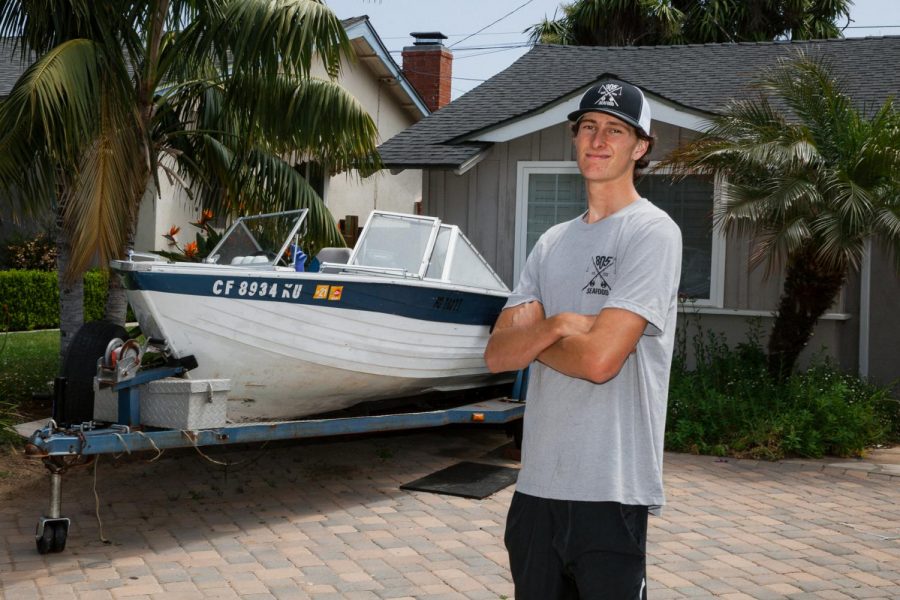 Connor Streett started his business 805 Seafood as a fish vendor at 17 years old and is grateful for customers still buying local fresh fish during the pandemic in front of his home and fishing boat on Thursday, April 30, 2020 in Santa Barbara, Calif.

With lines at grocery stores growing longer, some Santa Barbara locals have been heading to the harbor for a fresh and speedy way to get their seafood.

One of the youngest vendors down at the harbor is Connor Streett, a 17-year-old commercial fisherman.

Streett has recently started his own business of catching, cleaning and selling various types of fish from Santa Barbara’s nearby waters.

“People want fresh food and to not wait in line,” said Streett. “I post what I catch that day, and have it gutted, gilled and scaled so it’s ready to cook.”

Operating through his Instagram account @805seafood, he posts his catches of the day, then prepares and sells the fish on a first-come, first-serve basis.

Streett frequently goes out to fish at least three times a week, selling everything he catches the same day.

He can be found on most weekends at the harbor selling along with other vendors, but is one of few vendors that also sells on weekdays.

Plenty of locals have been heading to the harbor to get away from the lines and crowds at stores, and during the past couple of weeks there has been an increase in people visiting the beach and harbor due to the heat.

This increase in traffic has helped with sales, but is still a far cry from what vendors were used to prior to the pandemic. But with Streett selling an average of 30 pounds a day, the demand for fresh, locally sourced seafood has been growing.

“Depending on the catch, I expect to sell anywhere between 30 to 50 pounds a day, especially now since rockfish season is starting,” Streett said.

His father, Scott Streett, is the manager of the fuel dock in the harbor and would regularly bring Connor with him to work — this would begin his passion for fishing.

Starting at just 7 years old, Connor would spend his days on boats learning the tips and tricks from local fishermen. He would find that there was constant work, and would regularly spend time under the wings of local fishermen like Ron Evon and vendors such as Tony Vultaggio of Santa Barbara Sport Fishing Charter and Stace Cheverez of Cheverez Seafood.

Vultaggio and Cheverez are just a couple of the vendors that helped Streett get an early start in fishing, and have helped him with everything from picking the right boat to learning the best fishing spots.

Streett has had a lot of experience, from working with Vultaggio for three years, to working over summers with Cheverez.

“He’s always been super passionate about fishing, and that’s super cool to see at a young age. I think that his business is growing and gonna keep growing,” said Evon, a self-employed fisherman best known for leading “Sea Urchin Parties” on his boat, where groups can reserve a spot to be taken out to sea, fishing and eating live sea urchins.

“The harbor is definitely a different breed of people,” Evon said. “Everybody is super friendly, especially because we are in a non-corporate environment.”

After running his business for just over five weeks, Streett has gained nearly 600 followers on his social media accounts.

But he says becoming a commercial fisherman isn’t an easy feat. On top of the years of experience working on fishing boats and getting all the necessary materials, Streett needed to go through the process of boat registration and obtaining a commercial fishing license.

Although the impacts of the coronavirus have affected the numbers of sales for most fishermen, the harbor has allowed vendors a space to be able to sell to the public. On Saturdays the harbor acts as a marketplace, now known as the “Saturday Fishermen’s Market,” where Street and other vendors can continue selling their fresh catches to the public.