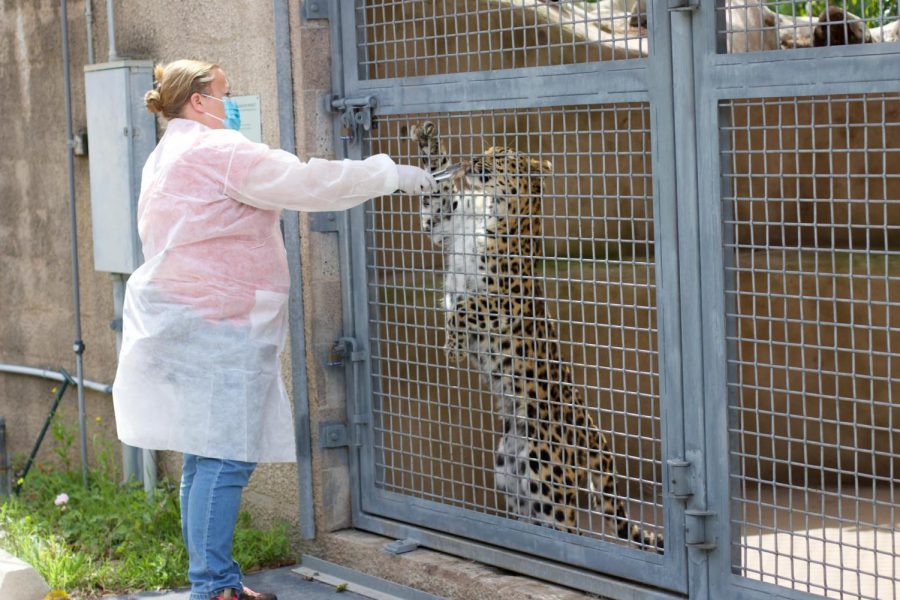 The amur leopard is the most endangered cat in the world. Its population in the wild is estimated to be less than 60.

The snow leopard plays a key role in ensuring the health of its ecosystem, and is another big cat species who faces a threatened population.

The Santa Barbara Zoo houses both.

And after news of the COVID-19-positive tiger in the Bronx made national headlines, the zoo’s animal care team is taking no chances with their cats’ safety and well-being.

“All [Association of Zoos and Aquariums] members were advised in real-time, are acting on the latest information from the veterinary staff at Bronx Zoo, and are consulting their colleagues to identify and implement protective and preventive practices,” said Santa Barbara Zoo CEO and President Richard Block in an issued statement.

Since then, the staff has been taking extra measures accordingly.

“We started wearing masks and gloves as an extra precaution with all mammals,” said Rachel Ritchason, director of collections at the zoo. “As soon as we heard news of the diagnosis, we increased biosecurity.”

In addition to wearing increased protective gear like shoe coverings and coveralls specific to each animal holding, keepers directly interacting with the zoo’s big cats have been practicing social distancing while feeding or training them.

For example, the leopards are fed from a distance with tongs.

The staff is essentially treating the animals as if they tested positive for COVID-19 already, although Ritchason does not believe any of the species will come down with the disease.

In addition to the shift of day-to-day care some animals are experiencing, the disease has also slowed some of the zoo’s conservation efforts.

Following the departure of the zoo’s male leopard Wyatt, a new leopard Kasha was brought in after years of unsuccessful breeding efforts.

However, the introduction of Kasha to its resident female Ajax has been postponed.

As of now, both leopards are being held in separate enclosures.

For a first time introduction between two leopards to go smoothly, Ritchason said, the margin of error has to be close to none.

“Right now, there are so many levels of uncertainty,” she said. “You don’t want any uncertainties in a leopard introduction.”

The virus has also delayed the arrival of new lions after the passing of the zoo’s lion Chadwick, who had lived at the zoo for 17 years and passed away in December.

In addition to felines, the zoo staff has also been taking the same heightened precautions with its primates.

In the past, great apes and other primates have been susceptible to respiratory diseases like the rhinovirus.

The Santa Barbara Zoo is home to two species of ape, two western lowland gorillas and two white-handed gibbons, in addition to three species of monkey, the goeldi’s monkey, the golden lion tamarin and the white eared titi.

So far, no animals have exhibited symptoms of COVID-19.

The animal care team is closely monitoring the health and behavior of each species thought to be vulnerable to the disease.

“With all the protocols in place, we’re doing our best to prevent the spread to our animals,” said Ritchason. “Nothing has been cut from [the animals’] care routines, and they’re still getting the best care possible.”