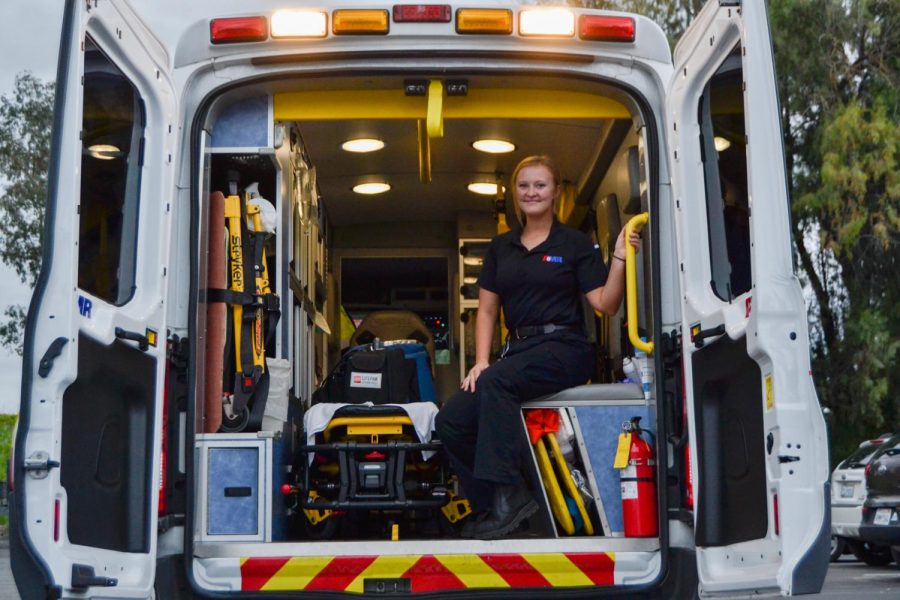 Tia Taylor works as an EMT while taking classes at City College on Thursday, March 12, 2020, at the American Medical Response Station in Goleta, Calif. At 19 years old, Taylor is the youngest EMT at the station and is viewed by coworkers by what she can handle, regardless of her age.

Tia Taylor gets home in the early hours of the morning, putting in her ear plugs and pulling down her blackout shades.

By day, Taylor attends her City College classes and studies in her Isla Vista home that she shares with nine roommates.

By night, Taylor dons her uniform complete with gloves, a tightly wound bun and her name badge proudly displaying her title as an EMT.

Taylor is the only 19-year-old woman to be working for the Santa Barbara County Emergency Medical Services Agency. She works five nights a week from 7 p.m to 7 a.m.

Her 12-hour shift begins by organizing the equipment and preparing for the unexpected.

“Some people ride roller coasters, some people work in the medical field,” Taylor said. “You never know what you are going to expect.”

As an EMT, Taylor is very familiar with the sense of urgency that comes with saving people moments from death.

Taylor recalled an emergency call she and her partner received one night. Three minutes away from death, an unidentified man was laying on the ground from an apparent heroin overdose and was having trouble breathing.

“I rushed to get my partner an IV without thinking,” Taylor said. “As soon as she stuck the IV in his jugular vein, he popped right up and asked, ‘What happened?’ with the IV still in his neck.”

Taylor described the incident as “one of the coolest things,” she has ever experienced.

Taylor’s fascination with medical services began when she was 16, watching a presentation being given by paramedics and firefighters at her school. She knew in that moment that she had found her path to success.

Taylor’s mother, Tracy, said her daughter is an inspiration.

“When she puts her mind to something, she just does it,” Tracy said. “She is very determined and knows what she wants, ever since she was a child.”

As a young woman in a crucial and demanding profession, Taylor often feels like she is treated differently for who she is, despite her extensive set of skills.

“Patients judge me by the way I look, my age, my height, my blonde hair,” Taylor said. She said she has been referred to as a “little girl,” by patients.

“Well this ‘little girl’ can save your life,” Taylor said.

Taylor said she loves that she can have the freedom to be who she wants to be.

“I am able to pave my own path as a young woman in this industry, by being good at my job, being so intrigued by it, and always asking questions,” she said.

Her journey in becoming a paramedic does not stop here.

“I have bigger plans,” Taylor said.

Taylor remains optimistic despite the grave nature of her profession.

She makes sure she leaves every shift with the purpose of “learning how to better yourself each time you clock out.”