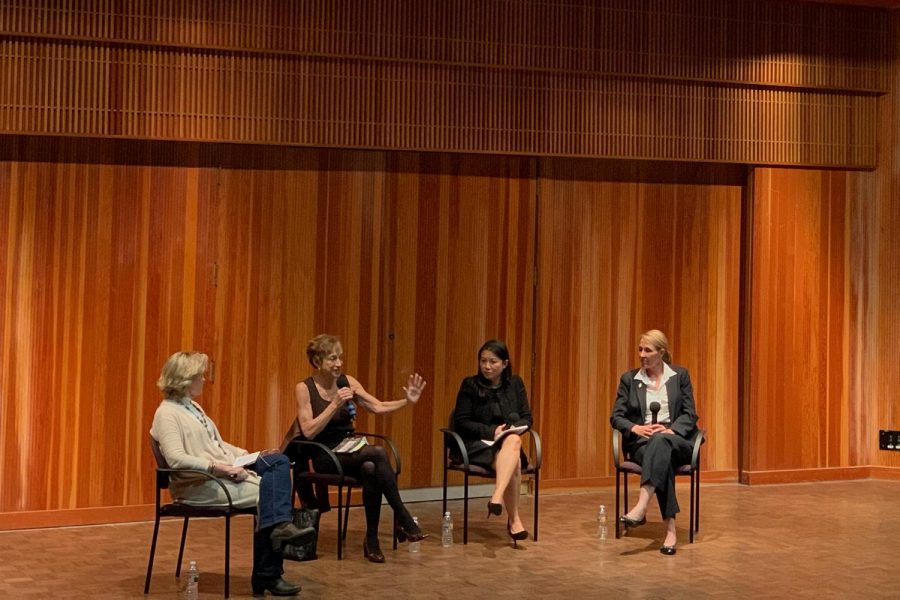 From left, Professor Anne Redding, District Attorney Joyce Dudley, Superior Court Judge Von Deroian and Police Chief Lori Luhnow discuss the adversity they faced in the Administration of Justice and how they rose to the positions of power they currently hold on Thursday, March 5, 2020, in the Business Communications Center at City College in Santa Barbara, Calif.

The panelists encouraged other women to pursue similar careers, and to not be discouraged in the male-dominated field.

“Any of you can do this,” Dudley told the audience.

Deroian is Santa Barbara’s first Asian female judge and said she is proud of the increase of diversity she has seen in the field.

“You don’t have to look a certain way or have a certain level of education or experience to rise to the level of being a judge,” Deroian said.

While these leaders wanted to encourage the audience to pursue work in the criminal justice field, they also admitted to the struggles they faced, especially as women.

As a young woman in the motor academy, Luhnow was discouraged by men.

While walking through the parking lot into the academy one day, a man stopped her and said that she was not capable of succeeding in the course. He told her, “there’s no way a woman is going to pass.”

At first she felt disheartened as she realized that there were not many examples of women in the county on motorcycles. But to her surprise, her male classmates welcomed her and encouraged her to succeed. Luhnow managed to surpass the expectations of many and graduated from the motor academy.

Criminology students Elsa Christians and Jenny Sundblad were both inspired by Luhnow.

“We both aspire to be police officers,” Christians said. “We want the opportunity to work here and we actually asked [Luhnow] about an internship so that was really cool.”

Dudley also recalled times when she faced sexist comments in her early career.

After beating a man out of a job opportunity, the man, feeling defeated, told Dudley that the only reason she got the offer was because she was a woman.

“After all the work I went through I questioned myself,” Dudley said. “That’s the worst.”

Guerrero felt it was important for his daughter and niece to hear what these women in the field had to say.

“I’ve seen firsthand how gender bias is in the workforce,” Guerrero said. “I wanted to show them that this exists.”

His niece said she left feeling inspired and thankful for the opportunity to see and hear these women speak.

“They proved everyone wrong,” she said. “They did it themselves.”

Dudley offered some final advice to the audience.