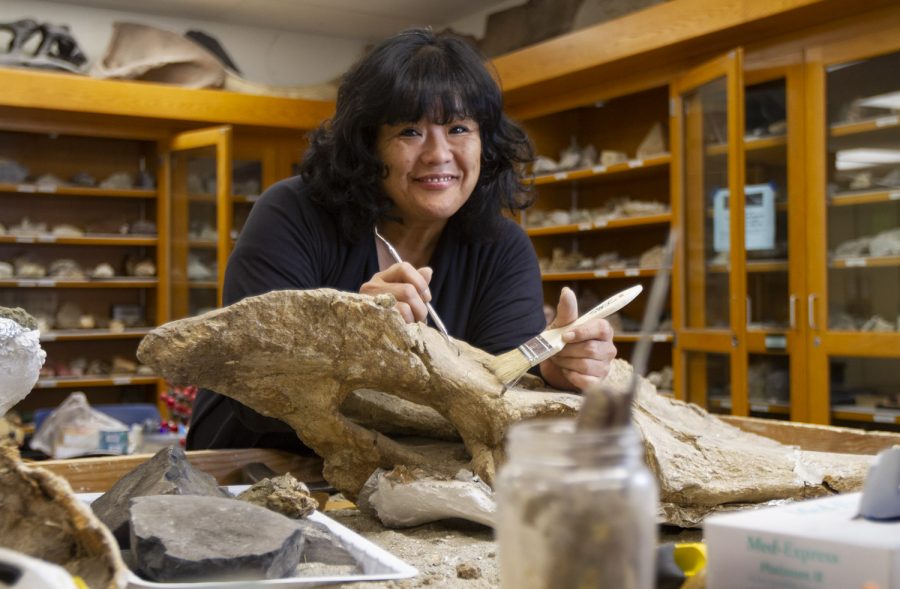 Eiko Kitao, City College's geology department’s lab technician dusts off a mastodon scapula in the "Core" of the Earth and Biological Sciences Building on Feb. 27, at City College in Santa Barbara, Calif. The Pelvis bone was found up the coast in Point Sal near the City of Guadalupe, Calif.

Eiko Kitao’s official job title as lab technician for City College’s Earth and planetary sciences department doesn’t give proper credit to her duties that reach far beyond the job description.

One week, she may be painting a mural of a prehistoric scene for the geology department. The next, she might be on the phone with a supplier of toy dinosaurs looking to make an evolutionary tree display.

On a Monday she’ll be leading a fossil expedition, unearthing the scapula of a 10,000-year-old mastodon. By Friday, she’s driving the department’s petrology bus filled with students eager to learn about Santa Barbara’s geologic makeup.

Just like her day-to-day duties, the path that brought her to City College is a bit extraordinary.

Her father’s abalone business brought her family to the United States from Osaka, Japan when Kitao was 3 years old.

They spent a few years living in Los Angeles before moving to Santa Barbara when she was in the sixth grade.

Growing up, Kitao admits that school wasn’t always a priority for her.

“I was a bad little egg,” she said while laughing. “I did things a bit differently.”

Kitao was a bit of a rebel.

For her, math was boring. Being a punk-rocker was a lot cooler.

However, it became apparent she needed a solid plan for the future.

Fresh out of high school, Kitao moved to Lake Tahoe.

After a brief stint as a competitive snowboarder, she eventually enrolled at Lake Tahoe Community College, with the original intention of becoming a meteorologist.

“I was a single mom. I remember thinking ‘I have to go to school. I can’t get by flipping burgers,’” Kitao said.

There, Kitao took a handful of geology courses. But her interest in geology was fully realized through the frequent drives she would make on the U.S. Highway 395.

The landscapes she saw around her asked the questions that would eventually lead her to Santa Barbara City College, where she took her first geology course.

Being a single mother of two children was no easy feat, and moving back to Santa Barbara to be close to family helped lessen the burden.

Back home and focused, Kitao quickly immersed herself in the world of geology. She became a geology tutor after two years, and has been an essential addition to the department ever since.

“She’s been through hell and high water and she came out happier,” said geology major Kainalu Kamai. “She’s a ball of energy.”

In 2011, Kitao graduated from UCSB with a bachelor’s degree in geological sciences, all in the meantime still heavily involved with the day to day of City College.

Before coming on as a full-time lab technician in 2012, Kitao was taking in all aspects of the department from a different point of view.

“I started to address needs without being asked,” she said. “I made myself invaluable, they couldn’t get rid of me.”

Invaluable may be an understatement for Kitao.

She has helped run nearly every geology field course since 2000 and her commitment doesn’t stop there.

She has also helped City College become the fossil repository for the Vandenberg Air Force Base in Lompoc. She leads regular trips to the base and has lined the geology “core” with countless fossil samples found there.

Around the department, Kitao has adopted the nickname “Mama Eiko.” She makes an effort to make a personal relationship with every geology student, regardless of their major.

“Eiko is the mother of the department,” said Ruben Aguilar, geology major and former president of the Geology club. “She’s the glue that holds it together.”

In 2018 she graduated  from California State University, Northridge with a master’s degree in physical geography. Now, in addition to her position at City College, she teaches part time at Oxnard College.

The second job hasn’t slowed her down, however, and her devotion to the department is second to none.

“This is the program that gave me a direction in my life,” Kitao said. “My heart is always going to belong here.”