Mother-daughter team hope to ‘Take over the world with cookies’ 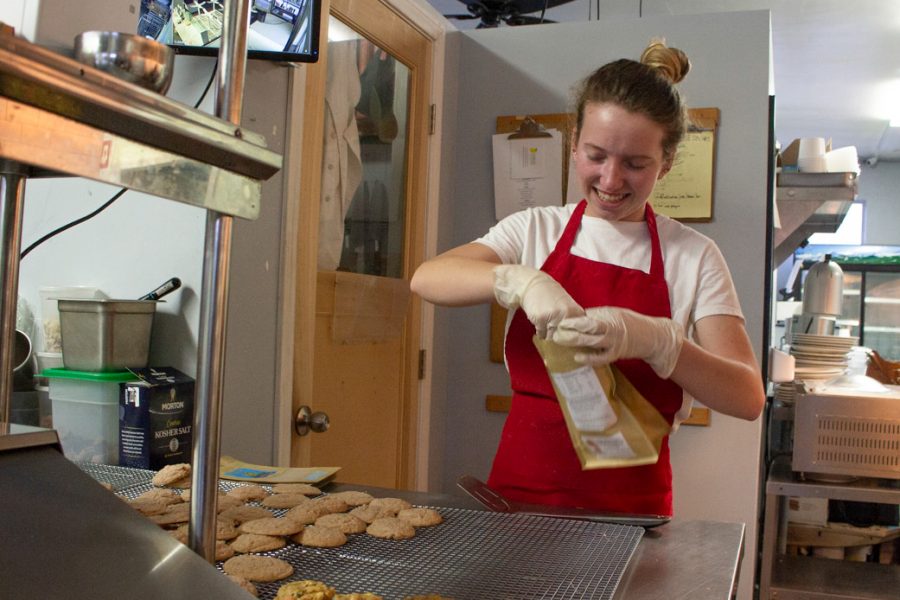 Siobhan Holden packages cookies to sell while chatting with her mom (not pictured) on Sunday, Feb. 2, 2020, in the shared kitchen of Santa Barbara Cookie Company and the Lemon & Coriander restaurant in Goleta, Calif.

Every Sunday, City College student Sioban Holden spends about four hours in the kitchen. She’s not cooking dinner for her family, she’s baking cookies for the world.

Holden and her mother, Diane Cavanaugh, own Santa Barbara Cookie Co. and mix, stir and bake at the Lemon & Coriander restaurant in Goleta.

They spend the day baking cookies—chocolate chip, peanut butter, oatmeal, cherry coconut, strawberry and dozens of other flavors—that they sell to businesses throughout Southern California.

“My mom and I always liked baking together,” Holden said.

The two grew up baking together, mostly pancakes. Holden’s godfather suggested they start a company. Holden and Cavanaugh originally considered fortune cookies, but since that would involve partnering with an established company, they decided to start their own company selling traditional, homemade cookies in April 2017.

They are a small, but mighty duo. They make, deliver, demonstrate and sell the cookies themselves.

Holden, a studio arts major, also designs all the logos and packaging for the cookies. 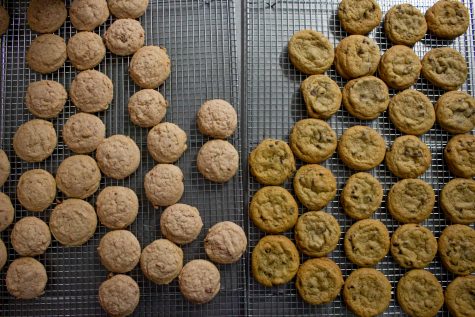 “Each cookie gets to be something fun that you can do in Santa Barbara,” Holden said.

Holden said when they first started the company and she was in high school, she would bring in the “mutant” cookies, the experimental flavors or the cookies that didn’t quite look perfect, for her classmates to try and provide feedback.

With seven core flavors and three to five seasonal flavors for each season, Holden and Cavanaugh have about 25 different cookie flavors.

Holden said some of the recipes they already had in their family and for others they would find recipes online then adjust to make their own.

For the company’s strawberry cookie, Holden and Cavanaugh had to figure out how to make it on their own. Holden said they experimented with fresh strawberries, frozen strawberries, freeze-dried strawberries and strawberry extract until they finally perfected what is now known as their Summerland cookie.

“I’ve been able to learn a lot and I think it’s good for me, even if it is really hard work,” Holden said.

When Holden isn’t in classes on Mondays and Wednesdays, she’s either making her art or working on the company.

Through working with these stores, Holden and Cavanaugh meet and interact with many different people, making new connections.

“We meet a lot of cool people in the ‘cookie world,’” Holden said.

Cavanaugh even recalled meeting actor Ed O’Neill, who is known for his role in the show “Modern Family,” and actress Jamie Lee Curtis as they tried and bought cookies from Santa Barbara Cookie Co.

“I’m used to people knowing who you are and chatting for a little bit,” said Cavanaugh, who grew up in a small town in Illinois. “I’m finding in the stores here that we have that connection.”

Cavanaugh previously worked in finance, but when her job moved to Denver, she decided to focus more on the company and work on Santa Barbara Cookie Co. full-time.

“I love it,” Cavanaugh said about working with her daughter. “We’re mother-daughter so we don’t always get along but [Holden’s] a good person, so she makes it easier.”

Santa Barbara Cookie Co. uses simple recipes without additives or preservatives. Holden and Cavanaugh also care about the type of ingredients they are putting out into the world. They put importance on using packaging that is eco-friendly and using locally-sourced ingredients as much as possible.

“We’re saving the world one cookie at a time,” Cavanaugh said.

“No, we’ll take over the world with cookies,” Holden said, laughing.