A land before time: A close look at Santa Barbara’s prehistoric life 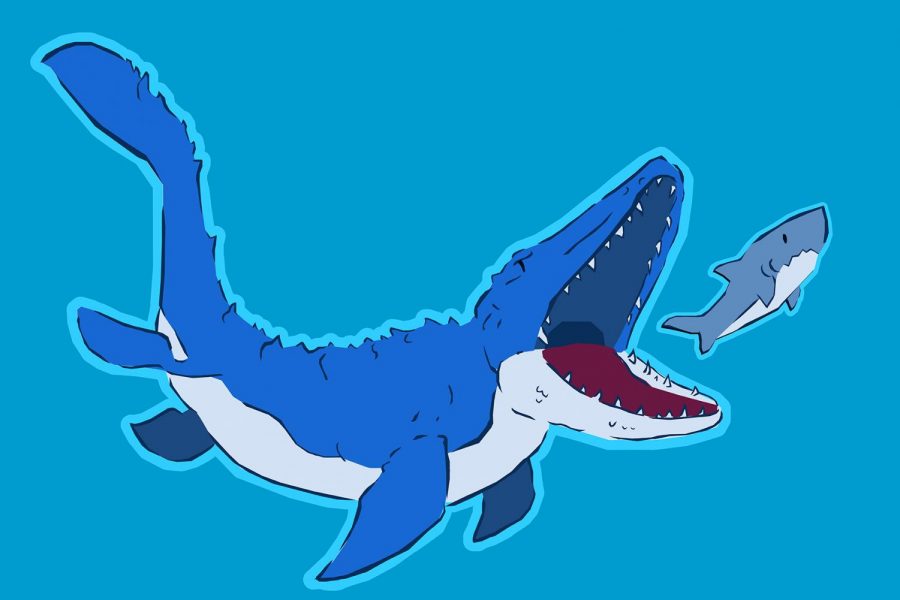 The Mesozoic era. Commonly referred to as the “age of the dinosaurs,” this time period ranged from around 250 million to 65 million years ago.

Beasts of all different shapes and sizes roamed the Earth, but where was the landmass we know as Santa Barbara during all of this? What kind of species walked our prehistoric coast?

While the rapid rise of sea levels threaten coastal cities like Santa Barbara today, the chunk of land we call home was completely submerged for the entire Mesozoic.

“Most of California was underwater,” said Jenna Rolle, instructor of the Dinosaurs course at City College. “It was all marine.”

While dinosaur remains have been found in the area, Rolle attributes it to streams and rivers draining into the prehistoric ocean.

“There weren’t many dinosaurs living in California during the Mesozoic,” Rolle said.

Instead, marine reptiles such as the dolphin-like ichthyosaurus and the behemoth superpredator mosasaurs dominated the seascape.

You might recognize mosasaurs from the recent Jurassic World movies. They could grow up to 60 feet in length and were an apex predator of their time. Really, the only thing they had to look out for were other mosasaurs.

For the age of the dinosaurs, California wasn’t exactly a hub.

However, this isn’t to say that it wasn’t home to a diverse range of prehistoric species later down the road.

During the Cenozoic era, things began to get interesting.

After the dinosaurs became extinct 65 million years ago, mammals took the reigns as the top predators on Earth.

“We had all the North American ice age animals,” said Eiko Kitao, the lab technician for City College’s geology department. “Everything you saw in ‘Ice Age.’”

Teleport yourself back to Santa Barbara during the Pleistocene Epoch, about 2.6 million years ago. It’s the last ice age, but for the most part, the scenery is recognizable.

“It was pretty similar to how things are today,” Kitao said. “A little bit cooler, and definitely not as arid as it is now.”

A major difference, however, would be the fauna.

To your left, a pack of smilodon, or saber-toothed cat, lounging under the shade of a tree. The word “smilodon” literally means knife-tooth, and for a good reason. Their canines could grow up to 11 inches. When you hear someone talk about a “saber-toothed tiger,” this is the animal they’re referring to. In 1973, the smilodon became California’s official state fossil.

To your right, a Harlan’s ground sloth, an ancient relative of the modern-day sloth, is eating leaves from a tree. These ancient beasts could grow to be up to 10 feet tall and could browse the tips of the treetops from the ground level.

“They used to roam all around this area,” Rolle said.

A large sum of prehistoric mammal remains, including giant ground sloth ribs, skulls and vertebrae have been found in the Vandenberg Air Force Base in Santa Barbara County.

“That base is about 51 kilometers of untouched coastline,” Kitao said. “It’s virtually pristine.”

Kitao has led many trips to the base and has come back with remains of primitive camels, horses, bison and smilodon.

Among the menagerie of species that inhabited Santa Barbara’s coast during the Pleistocene, there is none perhaps more iconic than the mammoth.

Columbian mammoths walked the plains of ancient Santa Barbara but were far less shaggy than their wooly mammoth cousins, due to a warmer climate.

The Santa Barbara area was also home to another, more pocket-sized species of mammoth which lived on the Channel Islands.

An island getaway, a promise of untouched grazing material away from predators was enough to encourage a group of Columbian mammoths to swim across the small divide between the mainland and the islands.

When the ice age began to end, waters rose and made the passage back unswimmable.

Because of the limited amount of food on the island and the lack of danger, the smaller mammoths were at an advantage, and the population began to shrink over generations.

“A plant can only grow as big as the pot you put it in,” Rolle said.

Eventually, the group that had made the trek to the island evolved into their own species: the Channel Islands pygmy mammoth.

“They were basically a smaller representation of Columbian mammoths,” said Rolle.

The mammoths would grow to about shoulder height on an average male.

The Santa Barbara area was also home to a plethora of predators. In addition to smilodon, wolves, short-faced bears and even a species of American lion all coexisted with the native people of California at the time.

But eventually, all of the ice age’s megafauna would become extinct in a relatively short amount of time around 12,000 years ago. While scientists haven’t been able to pinpoint a direct cause for such widespread extinction, it’s thought that the change in climate and human mediation both played a part in the extinction event.

“Humans are obviously the top predator,” Rolle explained. “[The extinction] can also be explained by some sort of dramatic climatic shift.”

Today, species all around the globe are going extinct at a massive rate, with scientists primarily attributing this to human activity, similar to the extinction at the end of the ice age.

And while mammoths and the like are long gone, the bones they left behind are a key component in understanding the landscape of the past.