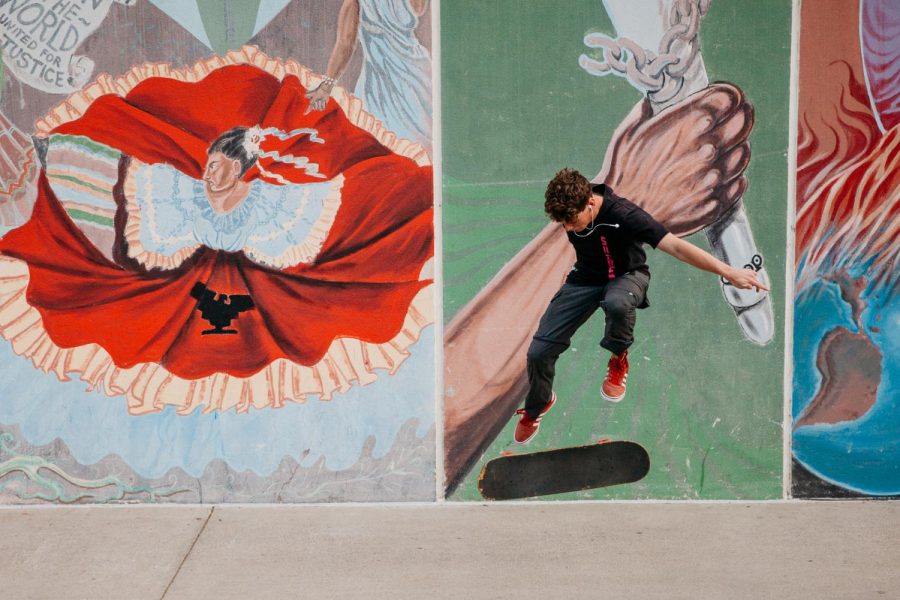 Dylan Osgood plays AC/DC in his earphones, takes three running strides for speed and jumps on his board to ollie the seven-stair connecting the second floor of the Administration Building to the sidewalk below. Four hard plastic wheels strike the concrete and Osgood rolls-off stoked. For him, City College isn’t just a learning institution, but a concrete playground, and he’s not the only one.

Skateboarding is not allowed on campus, but the hills and uneven landscape City College sits on makes the layout of campus desirable to skaters of all skill levels.

On a school day, the buzz of skateboard wheels over a textured fiberglass bridge-way connecting East to West Campus is a familiar sound, and boards placed desk-side in classrooms are a common sight.

But beyond the students who skate for transportation is an entire culture existing around street-style skateboarding at City College or “The CC” as local skaters call it.

“The CC is pretty much the most popular place to skate besides Skater’s Point,” said Dylan Osgood. “It’s only an eight-minute skate from the park and it gets you away from the little kids on scooters.”

Skater’s Point is the only free skate park in Santa Barbara and often gets crowded, enticing skaters to seek solitude and more creative, street-style skating on campus.

Several popular obstacles exist here, the seven-stair at the Administration Building, the ledges on east campus by the Humanities Building and the planter boxes in front of the Campus Bookstore. With that, comes more extreme spots like the three kink L-rail in front of Physical Science Building Room 113 that pro-skater Chase Webb used to film a 50/50-front board-slide grind combo that placed him in the top five for Street League Skateboarding’s Trick of the Year in 2017, nearly earning Webb a first-place prize of $10,000.

“Definitely one of the gnarliest things that’s been done on rails and kink-rails in general,” said pro-skater and global icon Nyjah Huston in a video where Webb breaks down the trick.

After a few test lines, Hill started high on the steep lead-in and ollied the gap. He cleared it but had to bail mid-air from wonky footing and landed on his front foot, rolling his right ankle and grounding him for the day.

“I’m pissed, I should’ve lined it up more,” said Hill “The only reason I came here today was to nail that gap and I fucked my ankle on the first try.”

On average, one-to-two skateboarding related injuries are reported to security each semester and tend to be minor.

“Every weekend our officers are telling the skateboarders that come down here to do their tricks to leave, and they typically listen,” said Head of Security Erik Fricke. “We’re not going to chase after skaters or grab onto skaters. We won’t be yelling at skaters, those don’t prove to be effective.”

While rare, serious incidents do happen.

Three years ago a student skating down the hill in front of the Humanities building tried to power-slide to slow down and lost control, throwing him from the board and slamming his head into the concrete causing convulsions, seizing and an induced coma to result in permanent brain damage.

Dozens of “no skateboarding” signs are hung, set up daily, and etched into walkways around campus and Fricke says adding more isn’t going to work.

For Criminal Justice Major Wyatt Rhoades skateboarding is not a crime.

“Sometimes in-between classes I’ll come skate the ledges to clear my mind,” said Rhoades “It gets my blood pumping and all I have to think about is landing it.”

Rhoades and his friend Franco Gavaldon live in Isla Vista but often travel to City College to skate the unique features.

“He [Rhoades] just sort of got me into skating and I’m into it,” said Gavaldon “I live in IV and nobody really skates there for real, so we come here sometimes.”

UC Santa Barbara allows skaters to ride on sidewalks and walkways because the campus is relatively flat, reducing the risk of higher speed impacts or collisions with others on foot.

By numbers, more students skate to class at UCSB with 24,346 students, compared to the 17,500 at City College, but the University’s weekend and holiday skate traffic doesn’t compare.

“There’s way more trick skaters at The CC, every weekend they’re down-there getting it,” said Rhoades “Everything is really gritty and crusty here, not really any good ledges and everyone just cruises around.”

For Dylan Osgood, his tricks are about self-expression and style which gives him a perspective to turn utilitarian stairs, hand-rails, and benches into a canvas for blending creativity with physical activity.

“I can’t draw or paint or anything, but I kinda think of my skating as its own type of art,” said Osgood “it’s like a flow, you know? Not to sound like an artsy guy or anything.”

Osgood has been focusing on the style of his tricks instead of learning new ones and has no plans of stopping.

While the students who use the college solely for academics will be on break for the holidays Osgood, among other local skaters, will shred the empty central coast skate hub that is Santa Barbara City College.