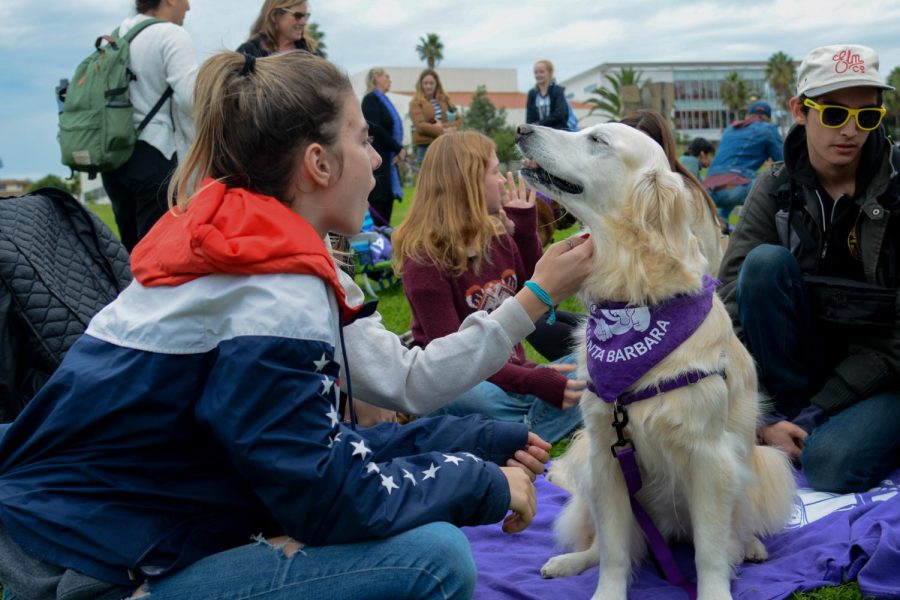 City College students pet and interact with therapy dog Lily-Rose on the West Campus lawn during the Wag Well Be Well Dog Therapy Event on Tuesday, Dec. 3, 2019, at City College in Santa Barbara, Calif. Lily-Rose is nine years old and has been working as a therapy dog for seven years.

Lily-Rose sprawled out in the grass of the West Campus lawn with her tongue hanging out of her mouth and a grin on her face.

The nine-year-old golden retriever received a lot of attention from City College students who gathered around her and six other therapy dogs.

The Associated Student Government collaborated with The Well, City College’s wellness group, and Therapy Dogs of Santa Barbara to give students the opportunity to lighten their mood and de-stress before finals.

“Seeing the positive influence that dogs can have on people of all ages is magical,” said Mary Barron, the owner of one of the dogs. “The dogs sense the emotions in people and they are very good at healing them.”

Students were overjoyed throughout the event, picking out free clothes, eating cookies and playing with the dogs.

Alexandra Montes De Oca, president of the student senate, said that she sees a lot of students walking around campus in a cloud and not really connecting to others. When the therapy dogs were there, everyone’s mood improved.

“Dogs are emotional beings that you can feel and have an emotional connection with,” Montes De Oca said.

According to Karen Stevens the head of Therapy Dogs of Santa Barbara, the dogs must undergo a five-week class that desensitizes them to loud noises, medical equipment and hugs before they can begin their therapy jobs, with some dogs having to do additional work that requires them to be calm at all times.

An employee of Therapy Dogs of Santa Barbara believes that human-animal bonds can transform people’s lives.

For seven of her nine years on the earth, Lily-Rose has been healing people of all ages.

She is a part of the Read to a Dog Program and visits assisted living and retirement homes and schools.

“I love to see the effect on the students,” her owner Kim Lieberman said.

Molly, an 11-year-old Maltese mix, was eager to meet students who were in need of her help. Penny Braniff, her owner, said that Molly truly loves people. Many students sat down on the purple blanket next to her as they ruffled her white fur.

Amy Riggs, a student at City College, cuddled up to the dogs and took full advantage of the love they gave back to her.

“Everyone here on campus is very stressed and it feels like there is so much pressure on yourself,” she said. The event, however, helped her manage that stress.

“It takes you out of yourself and your personal stress,” she said. “You are calm and filled with love.”

Becky Bean, the advisor of The Well, announced that starting next semester, there will be therapy dogs on campus every month to help City College students brighten their moods.