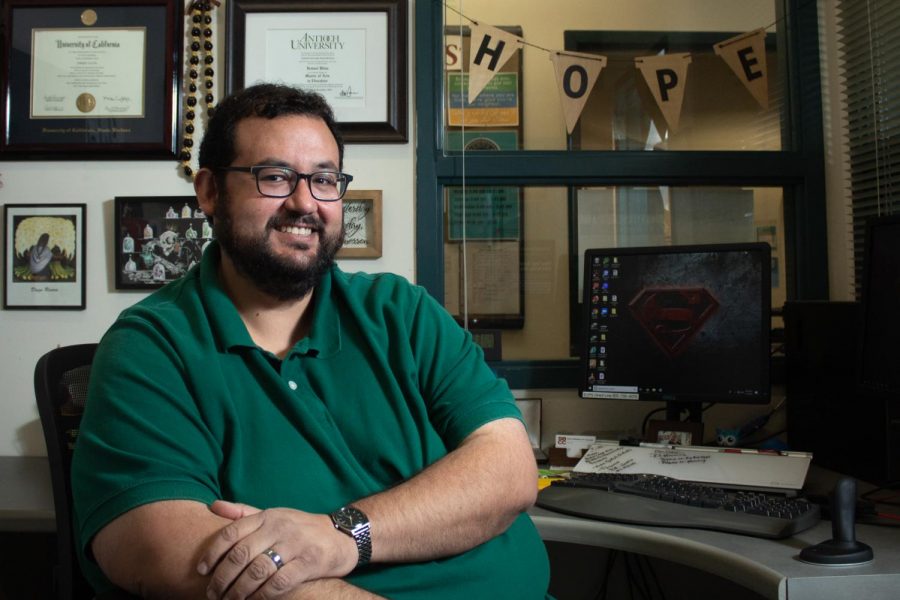 Ismael Paredes Ulloa shows smiles in his office on Tuesday, Nov. 5, 2019, in the Student Services Building at City College in Santa Barbara, Calif. Ulloa and his two siblings are children of immigrants from Jalisco, Mexico.

In high school, Ismael Paredes Ulloa had no idea what a “Sweet 16” was, yet it appeared on his standardized tests.

“I have no frame of reference for any of this,” he remembers thinking. “I feel like an alien.”

As a native Spanish speaker immersed in an education system he felt was biased towards English speakers, Paredes Ulloa had to overcome cultural differences to get the most out of his education.

Growing up, education was always the number one priority for Santa Barbara native Paredes Ulloa. His parents, immigrants from Jalisco, Mexico, worked hard every day to give him and his siblings the education they hadn’t been able to receive.

Now, Paredes Ulloa shares his value for education with marginalized and underrepresented students at City College in his new position as a student program advisor for Extended Opportunity Programs and Services.

A former staff member of the recently-closed Express to Success Program, Paredes Ulloa now brings his passion for helping students to EOPS. He is especially concerned about the challenges undocumented and AB-540 students face.

“I had very superficial concerns. They have survival concerns,” he said.

He expressed being grateful for his relatively smooth education, and works with these students to do “anything that would put them on the same playing field as I did growing up.”

“I’m a hardcore local boy,” said Paredes Ulloa, adding that he is the last of his family to remain in the area. “I have no plans of ever leaving Santa Barbara.”

Growing up as a child of immigrants, Paredes Ulloa had hard work modeled to him from a very young age.

“I grew up watching my parents fight to provide for us,” he said. “Their number one push for all three of us was ‘get your education.’”

His parents had little opportunity for education in Mexico.

His father, a worker on his family farm, completed the equivalent of an eighth-grade education, and his mother only attended school for two years.

Today, his parents’ dedication to his education inspires him to work harder to help others to have the same opportunity.

“There’s no more beautiful thing than being able to help each other,” he said.

Paredes Ulloa’s coworkers are thrilled that he is now a part of the EOPS staff.

“I couldn’t be more excited about the person we got in here,” said EOPS technician Alisha Sanchez. “He is going to make such a huge impact on the students here… He cares.”

Prior to his position at EOPS, Paredes Ulloa worked with students through the academic acceleration program Express to Success.

“We were all bummed that the program had ended,” said Andrew Gil, an academic counselor who previously worked under ESP. “But I knew that Ish would find something catered to his skills.

“His approachable demeanor makes it easy for students to work with him.”

Paredes Ulloa is a friendly and welcome face wherever he goes on campus, and his coworkers consider themselves his friends as well.