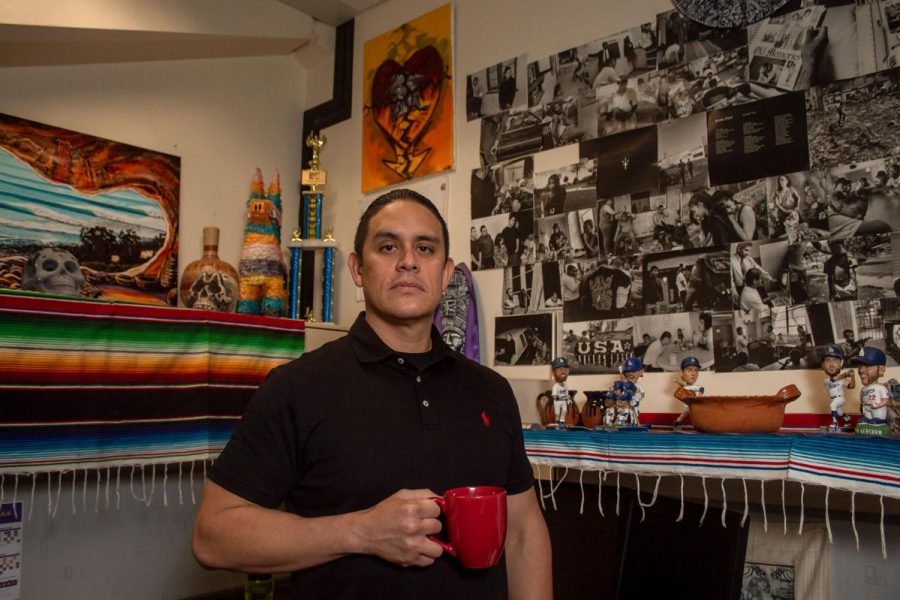 Student advisor for EOPS and Harvard graduate Noel Gomez stands in his office on Friday, Nov. 8, 2019, in the Student Services Building at City College in Santa Barbara, Calif. Gomez helped start the Transitions program that helps students affected by the Legal system.

Noel Gomez made his way from the streets of one of the most notoriously dangerous places in Los Angeles to studying in the hallowed red brick walls of Cambridge, Massachusetts at Harvard University.

Now the Extended Opportunity Programs and Services student program advisor assists others in pursuing their education through the Transitions program, a student success course geared towards helping those affected by the American legal system in beginning or returning to school.

The eight-week summer program is intended to make it easier for formerly incarcerated students to be ready for school.

Gomez, 36, grew up in the East Los Angeles neighborhood of Boyle Heights, a 6.5 square mile area home to over 30 gangs.

Though he never was involved with gangs or drugs he experienced firsthand the effects of living in a hostile environment.

“I remember one time, coming out of school, and somebody started shooting in the street,” said Gomez. “Our coach would have to cancel basketball practice sometimes because there would be shooting nearby.”

Others in the neighborhood saw potential in Gomez, and he was encouraged to stay out of the streets and focus on school.

“There are resources in East LA, but you have to dig to find them,” Gomez said.

When looking for colleges to attend after high school, Gomez was unsure of where he wanted to go, until UCSB sent him a packet with pictures of the campus right on the coast, palm trees and sand, and he decided to check it out.

“I drove up, I didn’t even know there was campus tours,” Gomez said. “I just parked at the Thunderdome and walked around,”

He felt out of place during his first visit, and it wasn’t until he completed the week-long STEP summer program at UCSB that he knew that he wanted to be in Santa Barbara.

“It was for first-generation students, low-income students,” Gomez said. Seeing others from similar backgrounds gave him the confidence he needed to make the leap.

When he graduated, he would find himself in for an even bigger culture shock.

When recalling the story of getting accepted at Harvard in 2005, Gomez laughs, saying when he first received the email, he was sure it was a denial.

“They didn’t send a packet or anything. I didn’t even want to open it,” he said.

He had his roommate open the message, “and sure enough, it said, ‘congratulations, you have been accepted to Harvard.’”

With that, Gomez found himself on the east coast for the first time, experiencing harsh winters and learning alongside some of the brightest students in the world.

“The thing I loved about it, people were interested in hearing about where you come from,” he said.

After receiving his master’s of education, Gomez returned to work in Santa Barbara, carrying with him the experiences he got along the way.

When he started the Transitions program in 2008 with Martin Leyva, now an adjunct professor at CSU San Marcos where he runs a similar program Project Rebound, they aimed to create something that answered the lack of resources for formerly incarcerated students.

“At the time, this was pretty groundbreaking,” said EOPS Director Paloma Arnold.

In 2008, only 3 programs of the kind existed in California. Presently, over 90 are offered across the state.

Former Transitions students have gone on to receive bachelors, masters, and even doctorates 2018 commencement speaker Berto Lule, now studying at UCLA, began his journey in the program.

“Noel is extremely passionate about this work and works very hard to constantly improve the services and programming for formerly incarcerated students,” said Arnold. “As a result of his dedication, Transitions has expanded well beyond the summer bridge program.”

The program has recently received a grant that allowed them to offer the class year-round, as well as offer for-credit classes in Santa Barbara County Jail.

As Gomez puts it, “these programs are here to stay.”