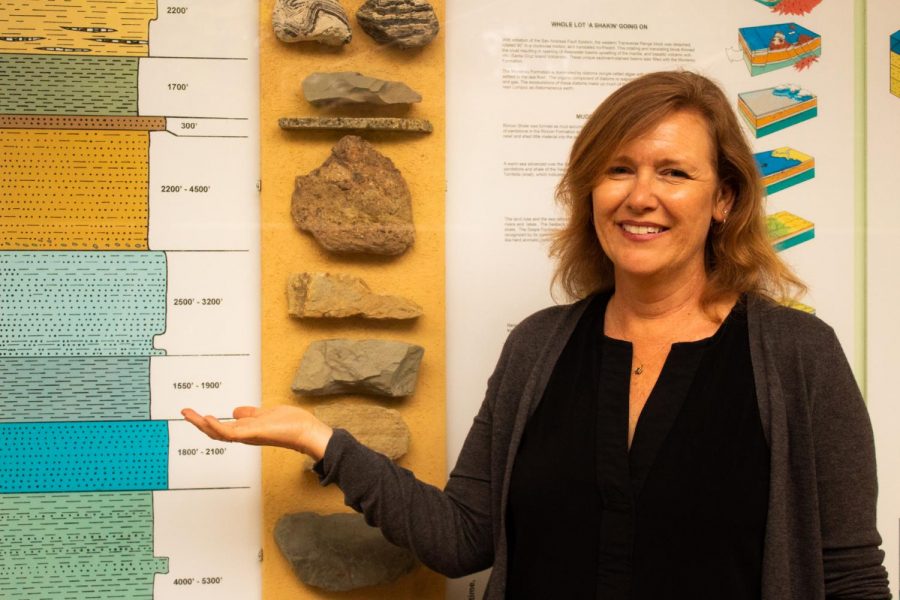 Kristen Sneddon displays one of the various visual aids the Geology department has to offer in the Earth and Planetary Sciences Building on Wednesday, Sept. 25, 2019, at City College in Santa Barbara, Calif. Sneddon is the district four Santa Barbara City Council member and recently became a full-time faculty member at City College.

When Kristen Sneddon was in the sixth grade, she wasn’t allowed to go out for recess for one day a week because the thick brown smog in Los Angeles made it difficult to breathe or see.

“I feel a responsibility to do whatever I can,” Sneddon said.

Sneddon was an adjunct at City College for four years but recently became a full-time faculty member.

She said her ambition for fighting for environmental laws came through watching how a change in smog ordinances in Los Angeles cleared out the hazy skies at a time when people had to wear gas-masks to walk down the street.

“Seeing that showed me that policy has a real impact on people’s health and lives,” she said.

Sneddon started out as an environmental science major but switched to geophysics after taking her first geology class at City College.

Her first ever camping trip was with her geology class to the Sierra Nevada Mountains, where she fell in love with the artistic and mathematical aspects of geology.

“It was the first time that what I was learning made physical sense,” she said.

Sneddon said she hadn’t planned on teaching and sitting on the city council, but the March for Science put on by students in spring 2017 inspired her to do more.

She said she felt a responsibility to do what she could as a person with a background in science.

“There’s a disconnect between science and policymakers,” she said, explaining that she hopes to bridge that gap.

One of her key victories on the city council was helping pass the ban of styrofoam and plastic straws in Santa Barbara.

She also said she’s currently pushing legislation to have all of Santa Barbara on renewable energy by 2020.

Another memorable moment for Sneddon was when a man said the full unabbreviated n-word during public comment at a city council meeting.

As soon as the word left his mouth, Sneddon buried her head in her hands.

Although other members of the council did not respond to the issue, Sneddon could not allow it to go unaddressed.

“That word is not welcome in these chambers,” she said.

Despite her tenacity in leadership for the city, many of her coworkers aren’t aware of her double-life.

“She doesn’t talk about it here. Ever,” said Danielle D’Alfonso, an associate professor of environmental geology.

D’Alfonso has known Sneddon since she joined City College when D’Alfonso was a tutor, but she only learned of Sneddon’s role on city council after reading about it in a newspaper, she said.

She also said Sneddon was a huge influence on her decision to become a teacher.

“When I was a tutor she always valued my input,” D’Alfonso said. “That was very encouraging to me.”

Earth and Biological Science Professor Michael Robinson said he had “no idea,” that Sneddon was involved in passing the ban on plastic straws and styrofoam.

He did say, however, that she is “super friendly and energetic.”

Sneddon made it clear that the undercover life she leads is purposeful.

“It’s really important to me not to politicize the things I teach in the classroom,” she said.

Sneddon watched the term global warming shift to climate change and said oil lobbyists were the culprit behind the politicization of the term.

She said that because science is evidence-based, she feels it would undermine her credibility to bring politics into a scientific atmosphere.

“I’m not a politician, it’s not my ambition to go higher,” Sneddon said.

Her philosophy is simple: Keep politics out of science, and use science to affect political change.