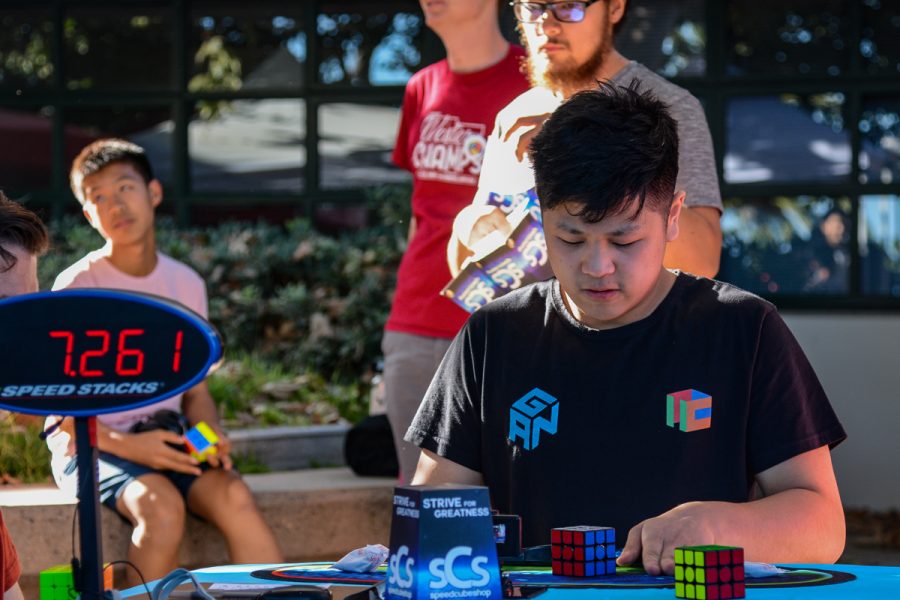 Current SpeedCubing Champion Max Park stops the timer after solving his 3x3 Rubik's Cube on Saturday, Sept. 28, 2019, on west campus at City College in Santa Barbara, Calif. Park won three of the events with the fastest solving time during the competition.

“I like competing and breaking world records,” said Max Park, 17, who is the current top-ranked cuber in the world.

Park has been cubing since he was 10-years-old and has broken several world records for speedsolving.

As an acting chapter for the World Cube Association, the City College Rubik’s Club has organized and hosted the event since 2018, hoping to encourage more people to attend its meetings.

“We had a competition before and the word didn’t get out much,” said Rubik’s club staff advisor Sean Kelly. “We have workshops to teach technique and algorithms to solve the cube, it becomes really fun.”

These competitions classify its contestants in a world ranking system operated by the WCA.

Contestants compete with themselves and each other to solve Rubik’s cubes that vary in sizes from the 2X2 pocket to the traditional 3X3, and up to the 4X4 cube.

Cubers from all over California and Oregon were attending, even players from India and China came to battle.

Mulun Yin, an international ranked speed solver from China, said that the opportunity to travel is a big part of what he loves about cubing.

The competition wasn’t just a chance for cubing pros to show off their skills to the Rubik’s community, families from all over came to have fun and bond over their love of Rubik’s cubes.

Cameron Brown, a local sponsor of the event, represented his business at Rubik’s events like these since 2010.

Brown fell in love with Rubik’s cubes when he realized what an open community it was.

“What I love about cubing is anyone can do it,” Brown said. “It’s really great to see someone solve a cube for their first time.”

Whether players compete or solve the puzzle just for fun, cubing unites people from all over.

“We just want everyone else to love the cube as much as we do,” Kelly said. “And to share the joy and sense of community that it has for so many people.”