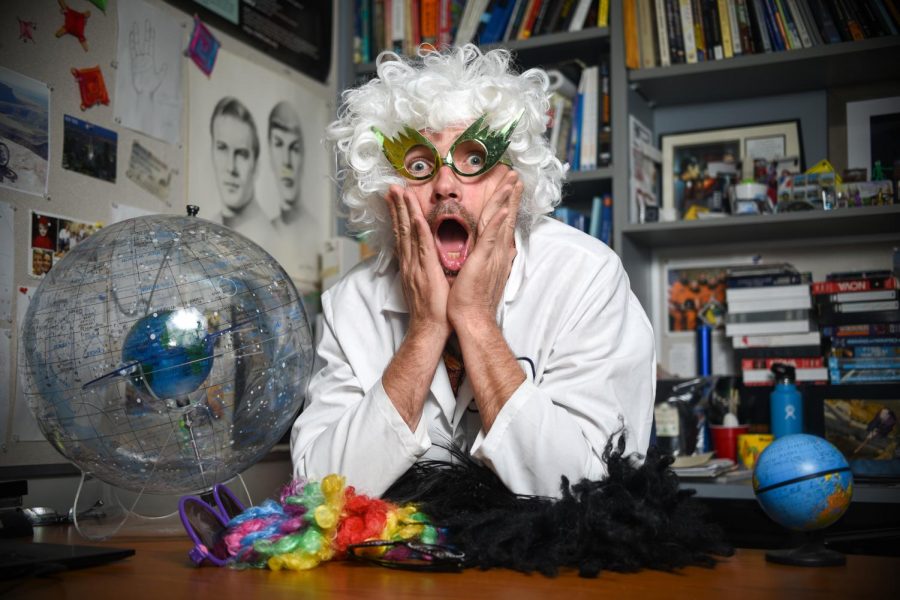 Erin O’Connor shows off his “alternative learning” techniques in his office on April 29, 2019, at City College in Santa Barbra, Calif. He said he uses his collection of wigs and funky glasses to engage and teach students.

Whether he’s wearing wigs while lecturing or assigning his students to rap for extra credit, nothing is too unconventional for astronomy Professor Erin O’Connor when teaching about his passion— the universe and beyond.

“If you can entertain people, they want to come to class and be less stressed out,” O’Connor said. “There is no reason it can’t be fun, I think science is fun.”

Lecture halls are filled as students are all ears to hear his lectures about the universe, black holes, and terrestrial life.

Starting off as a temporary instructor at City College in 1989, O’Connor quickly made his passion for teaching astronomy his full-time job.

Because the information from the class material can be overwhelming, O’Connor said he tries different techniques to keep his students satisfied and attentive to the lecture.

“I trick students into learning,” he said. “I have clickers to earn points while attending class, so it’s more of an activity and not an assessment.”

Sometimes he dresses up as a “mad scientist,” acting as different personalities, or wears wigs while showing his students dry ice.

O’Connor also offers extra credit for going on a field trip to Griffith Observatory, wearing something astronomy related, singing in front of the class or submitting an astronomy-themed rap song.

Before he started his job at City College, he worked as a math and science instructor at a junior high where he said he explored different teaching styles.

“College kids are no different from junior high kids,” he said. “So all my tricks I learned from teaching at junior high I brought to college.”

Students who attended his lectures are usually enthusiastic about the class and O’Connor as a professor.

“Having professor O’Connor as an instructor for Astronomy 101 was a rewarding experience,” said Jason Barrios, a former student and astronomy tutor. “Not only does he cover the material clearly, but he also presents it in a fun and entertaining way.”

Students even won awards just from attending his lectures.

“One time I had a student who turned her notes into a poem by adding some words,” O’Connor said. “She ended up winning $3,000.”

Outside of class, he is also very active in extracurricular club activities for the Astronomy Club that often does fun activities like a pizza day and star parties.

Cecilia Dancourt Lopez, also a former student and astronomy tutor said she was very happy she took one of O’Connor’s courses.

“I think Erin O’Connor is a very passionate teacher,” Lopez said. “It was a three-hour class but it was the best, when the class was over I wanted more. The class was very easy going, serious, but I could relax.”

After being around for a long time at City College, O’Connor still enjoy teaching new students every semester and opening their minds to astronomy.

“Astronomy is a great way to captivate the interest, and make students more comfortable with science,” he said.