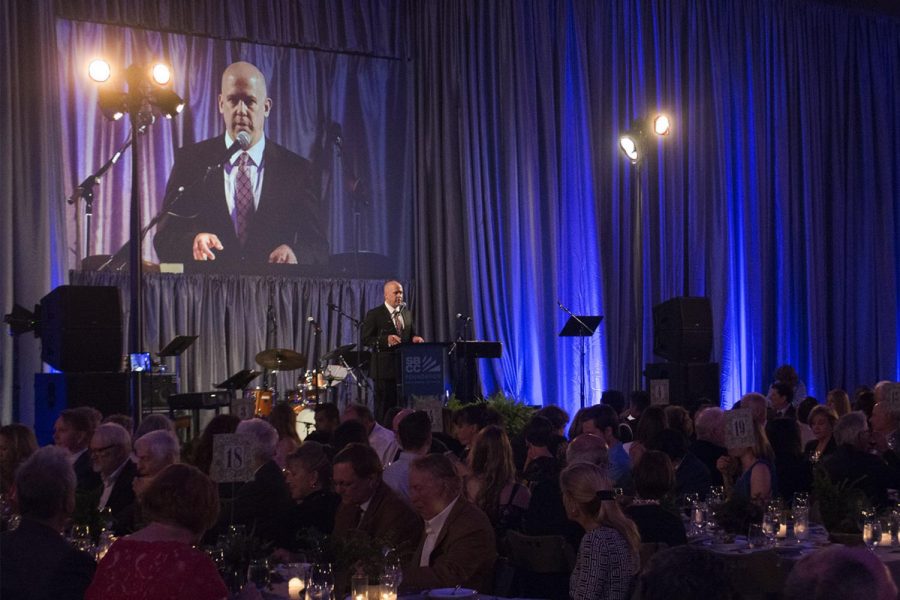 SBCC Foundation CEO Geoff Green speaks at the beginning of the Gala about what the event will consist of and the goals of the Foundation during their Inaugural Gala Fundraiser in the Sports Pavilion Gym on Saturday, April 27, 2019 at City College in Santa Barbara, Calif.

The SBCC Foundation raised nearly $400,000 through donations at its first-ever “Spring Forward” Gala Saturday in the elegantly-transformed Sports Pavilion.

Dressed in spring cocktail attire, guests mingled while waiting for the catering services to begin. Guests were offered endless glasses of wine and snacks while live music from the City College Music Department played softly in the background.

The SBCC Foundation is a non-profit organization that brings public funds to the college through scholarships like the SBCC Promise and programs like EOPS, TAP and CARE.

The Foundation’s Chief Executive Officer Geoff Green hosted the event and welcomed different speakers to the stage throughout the night including Superintendent-President Helen Benjamin, Union Bank’s Vincent Caballero and three generations of the foundation’s legacy.

“The college and foundation have always been there for us,” said Caballero, the regional manager with Santa Barbara Union Bank who supports City College through the foundation.

Luxury family vacations and private dining events were auctioned for the person with the highest bid.

“I just feel really appreciative, especially because the college really gave me an opportunity to pursue my major,” said Juwan Vega, a third-year business major at City College and one of the guest speakers of the night.

During his speech, Vega added that he was not able to pursue an education at universities due to financial circumstances and thanked the audience for the support he received through the foundation.

As the night came to an end, Anthony Beebe, former superintendent-president of City College, wanted to show his appreciation for the foundation.

“It’s incredible how the number one community college is able to provide that,” Beebe said.