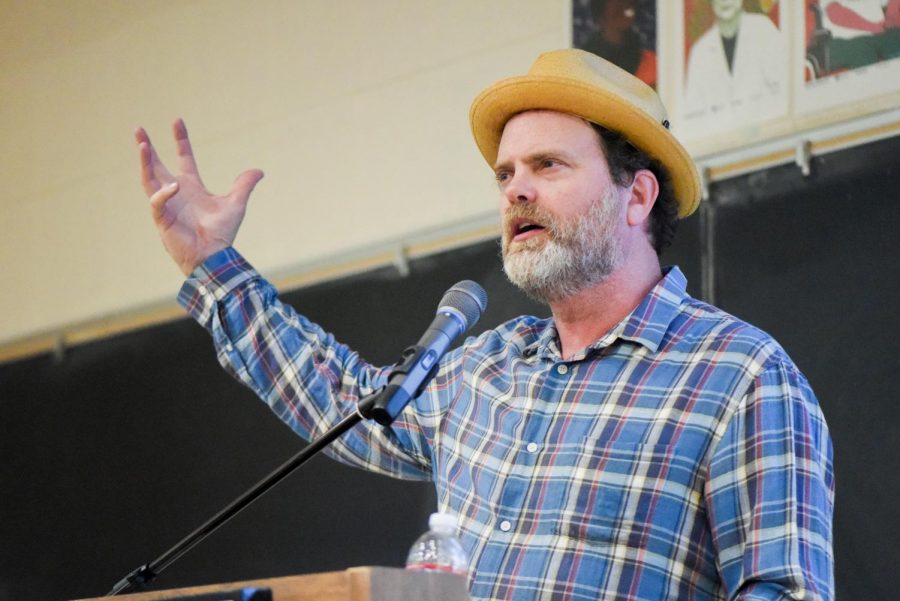 Rainn Wilson had the packed lecture hall laughing throughout his stories from his life, Baha’i faith, and foundation Soul Pancake on Thursday, April 25, 2019, in the Physical Science Room 101 at City College in Santa Barbara, California. Phi Theta Kappa and the Middle East studies department hosted the event.

Actor Rainn Wilson, known mostly for his portrayal of Dwight in “The Office,” attracted hundreds of curious students to his lecture on his experience growing up with the Baha’i faith, and how it helped him start his own company.

“See my security right there?” he joked, pointing at the City College security. “How’s everything? Is my cruise ship still up-front?”

The lecture hall was filled to capacity with students and faculty, with even more lining up outside the door to try and hear the actor speak.

The Middle East Studies program and City College’s Phi Theta Kappa invited Wilson to talk about his religion and how it inspired him to build his company, SoulPancakes.

The Baha’i faith originated in the Middle East and focuses on the unity of all religions, Gods and people.

“Most people think only about the Islam when talking about Middle Eastern religions,” said Manoutchehr Eskandari-Qajar, chair of the political science department and director of Middle East studies.

Members of Phi Theta Kappa said they were delighted that Wilson came to speak.

“It is great to bring in speakers to talk about different topics, especially a high-profile celebrity,” said Advisor Mark Sanders.

Wilson asked the crowd to conduct an experiment.

“Take out your phone and type into Google: ‘College made me feel…,’” he said.
The students read the answers aloud, saying things like “dumb,” “stressed,” “worthless,” and “suicidal.

“This wasn’t the case in my generation when I went to college,” Wilson said. “You don’t know where your life is going to take you, making mistakes is okay.”

Wilson described growing up in the late ‘60s in Seattle with “Bohemian type” parents who raised him with the Baha’i faith.

“That’s why they called me Rainn, of course,” he said.

He said the decade brought spirituality and the search for solutions to world problems to the forefront of society.

“Back then, it was so easy to talk about spirituality with strangers, now when you ask someone about it you’ll get a soy latte thrown at you,” he said.

Wilson spoke of how highly he valued being raised this way, emphasizing the importance of diversity and equality, and how as a child he believed that humans were here to find a solution to poverty and “gross inequality.

“We’re diverse and we’re beautiful,” he said. “That was a great thing growing up believing.”

Wilson said that at 20 years old, he decided that he wanted to become an actor and left his religion behind.

“It was my dream to have a bohemian life as an actor in New York,” he said. “I was a selfish young person, I didn’t want this morality hanging above my head.”

At 25, he had an acting career, a girlfriend and a “kick-ass van,” yet he felt unfulfilled.

“I was living my wildest dream, yet I was deadly unhappy… One of the things I wanted to explore was God.”

He said after an intense journey that he found his faith again, and he was finally able to look at it through his own eyes.

Wilson said his faith inspired the creation of his company, where he creates content to explore “life’s big questions” and “celebrates humanity.”

Wilson spoke to the Channels after the lecture and said he hopes that sharing his story can help other people and help them understand his faith.

“I like to share my life story and certain experiences because I think it could be relevant to younger people.”