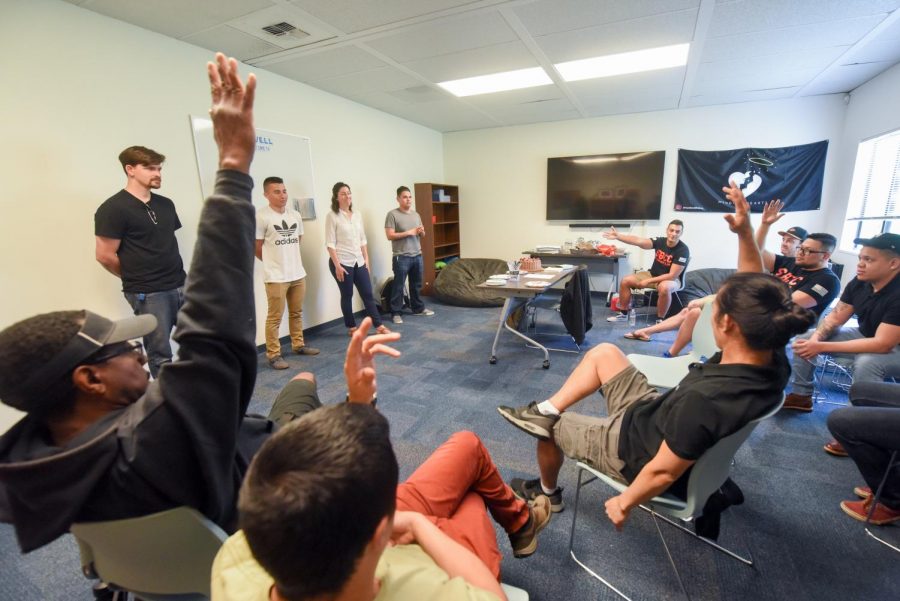 At the front of the room in the black t-shirt, Christian Wicklein is elected as the Veterans Club vice president, Megan Lee in the white blouse, is elected club present and Ramiro Detrinidad in the grey t-shirt, is elected club treasurer in The Well on Friday, April 19, 2019, at City College in Santa Barbara, Calif.

The City College Veterans Club hosted a farewell event Friday to thank exiting club officers for their contributions while simultaneously ushering in a new era of club leadership.

The event took place at The Well, East Campus Center Room 21, where club members discussed the club’s future and reflected on the positive legacy of the departing members.

“Thank you for taking care of us,” said veteran and club member Megan Lee. “It’s gonna be hard shoes to fill.”

Current Club President Paul Ferretti, Vice President Dalton Williams, and Treasurer Tyler Edwards are all leaving City College after this semester to advance to four-year institutions after leading the club through its formative years.

“I’m proud that I helped facilitate bringing all these people together,” said veteran and current President Ferretti. “It’s constantly fluctuating but the message stays the same- bringing the veterans together.”

The Veterans Club provides veterans at City College with a sense of community as well as raises awareness about the resources available for student veterans.

Many members have found a sense of friendship and support in the club that otherwise would have been difficult to find, Ferretti said.

With the departure of the current club officials, the club voted on its officials for the next school year and elected Megan Lee as president, Christian Wicklein as vice president, and Ramiro Detrinidad as treasurer.

Before the official vote, candidates for club office discussed their vision for the next season of the club, many stressing the importance of increased club visibility and accessibility to greater resources for its members.

Many more veterans at City College are unaware of the club and could greatly benefit from the community and resources it provides, Detrinidad said.

“There’s people out there who care about this club and how we do it,” said Vice President-Elect Christian Wicklein.

The club already has connections with defense contractor Raytheon, a company which helps veterans find and apply for jobs. Wicklein said he believes they can gain even more partnerships.

Club President-Elect Megan Lee is also optimistic about the future of the club and the shift in leadership and hopes to build off the foundation that the former leadership laid.

“I’m happy for them,” Lee said about the departure of the former club leaders. “We have a fresh start and fresh ideas, and we always have them to call on.”

Current President Paul Ferretti has been a member of the club since its creation in 2017 and has gained a strong sense of community and support from the club.

Ferretti remained humble while being praised at the event, saying to the club, “As much as you’d like to thank us, really, thank you.”