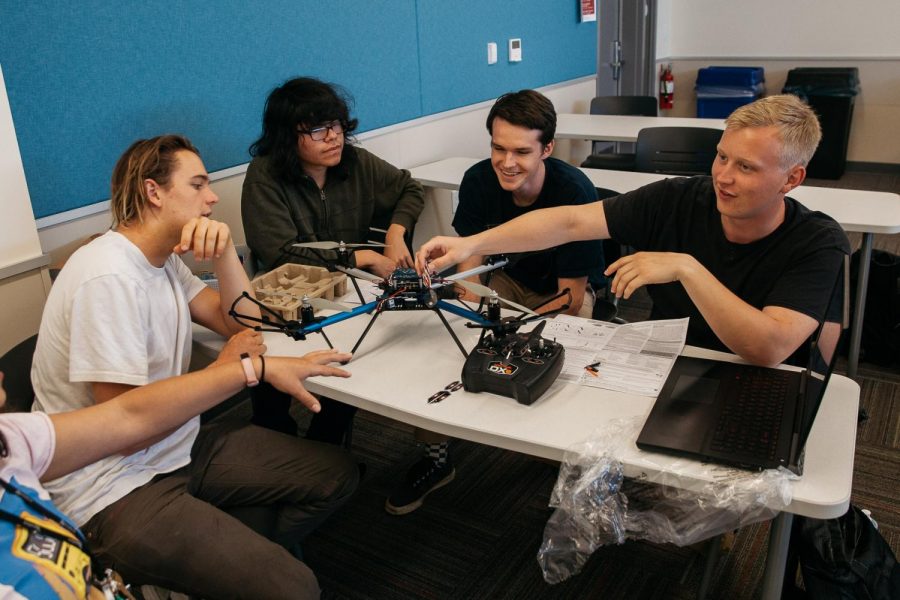 Students from the robotics club assemble a drone during a club meeting on Friday, April 12, 2019, in the West Campus Center Room 304 at City College in Santa Barbara Calif. The club has been assembling this drone for the past four weeks and intends to have it flying properly by Friday, April 19.

The City College Robotics club is building drones, coding up a storm and teaching students what it takes to become accomplished engineers.

The Club welcomed Adrian Diosdado, a Santa Barbara native who graduated from City College in 2012 and became a Northrop Grumman aerospace engineer, in Physical Science Building Room 101 to inspire some thirty club and audience members in their pursuit of engineering.

“Be passionate, be resilient,” said Diosdado, who bore an airplane pin on the lapel of his suit. “Take risks! The greatest fear we face is ourselves. Embrace the difficulty of the journey. It is difficult to be an engineer.”

Some audience members said meeting an accomplished engineer like Diosdado motivated them more to continue with their education.

“I thought it was very inspiring,” said Duy Nguyen, Vice President of the Robotics Club. “Having someone tell you that they went through the same struggle as you and that it is going to be okay means a lot.”

But not all members want to pursue a competitive and difficult career or degree in engineering.

“I joined the club because I have an interest in engineering and a past with robotics,” said Sophie Cameron, who joined this semester and is President of the Biology Club. “It’s a good outlet for that but I discovered that I had a passion for the environment.”

When Diosdado attended City College, there was no Robotics Club. If there had been one, he said would have been involved. To him, clubs like that are crucial when one wants to become an engineer.

“The main way it helps them prepare to become engineers is it gives them the toolset to work as a team,” Diosdado said. “They can communicate their ideas with other people.”

He told the audience to “work as much as you can in a team environment.”

Brianna Del Pozzo, who has been a club member for about a year, is also president of the Women in Engineering Club and an officer in the Astronomy Club.

“I have been in the club for about a year,” she said. “But I have been attending the talks for longer and I want to be an engineer.”

The Robotics Club members emphasize the fact that they do a lot of hands-on projects such as building an underwater drone and quadcopters, a drone that goes in the air, but they also try to have at least one or two speakers every semester according to the president of the club, Paul Gaston.

But it hasn’t always been that way.

When Gaston joined, a lot of the previous club officers had left and the future of the club seemed uncertain. Nguyen and Gaston, majoring in chemical and biomedical engineering respectively, decided to take the helm.

“We wanted leadership roles,” said Gaston. “We didn’t have a main project to work on and I wanted to offer that to the club. We didn’t know what was going to happen with the club. Now we have nine officers and about fifteen to twenty members which offers a backbone to the club. I would say that we have done a lot more do engage members with hands-on projects.”

The next steps for the club are to finish building the quadcopters and fly them. Gaston and his fellow club members are organizing a picnic to fly drones out on a beach likely at Leadbetter Beach and open to anyone interested in coming. The club is always welcoming new people.

“I always want more club members,” Gaston said. “Nobody has to have experience. No matter how many people there are, I am happy with the amount of people there.”

The Robotics Club meets at 3 p.m. Fridays in West Campus Center room 304 and can be contacted at [email protected] or on Instagram at @sbccroboticsclub.