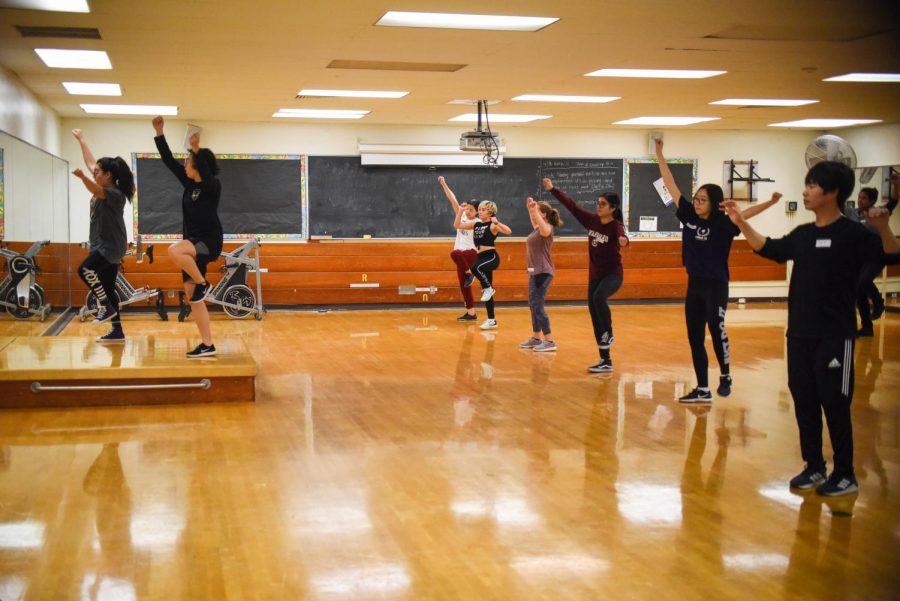 From left, club vice president Ariana Rubio and president Mimi Vorosmarthy lead the Kpop club from the front of the room during a meeting on Friday, April 5, 2019, at City College in Santa Barbara, Calif. The club meets every Friday at 2 p.m. in Physical Education Room 114.

The worldwide known phenomenon Korean pop dance has taken over City College with blends of Electronic Dance Music, Hip-Hop, and R&B with South Korean influence that students get to enjoy in the new K-pop Club.

Club President Mimi Vorosmarthy thought that a dance club was needed at City College, and collaborated with her friend and club Vice President Ariana Rubio to make the K-pop club happen.

“If no one else was going to do this club, I thought I might as well do it before I leave,” said Vorosmarthy. “The reason I wanted to do K-pop is because there are these iconic choreographies that people want to learn, and I just thought that I might as well teach it because I want to learn it myself.”

The choreography is a significant element of K-pop, and the popular bands all dance in sync while performing.

During the two-hour club meeting, Vorosmarthy and Rubio taught the group choreographies and put the steps together with popular K-pop songs.

“It’s nice to see everyone come and learn, and I’m more than happy to teach them how,” said Rubio. “It’s a very open club, for anyone who likes to dance.”

Vorosmarthy records the members at the end of each practice session to help the dancers improve and evolve.

“I make sure we have a copy of what we did that day because I want people to see and look at themselves so they know how they can improve,” said Vorosmarthy. “That’s the way I learned to dance, by filming and looking at myself.”

Vorosmarthy explained that anyone can join the club regardless of dancing ability.

“I think it’s fun but very hard, I didn’t know what kind of dance it was before I got here,” said Aizpuru.

Nursing major and K-pop fan Noelia Romero and enjoys dancing with her peers and is a fan of the music.

“She [Vorosmarthy] makes it really fun, and I’m here every time we meet,” said Romero. “I always wanted to try dancing, and I listen to a lot of K-pop.”

Vorosmarthy is enthusiastic about the increased participation during club meetings this semester and hopes that the club will be able to continue to meet during the summer as well.

“It’s one of the biggest clubs on campus, I would say that’s because we’re the only dance club,” said Vorosmarthy. “We have an average of 20 people in the club, and between 60-70 people on our mailing list.”