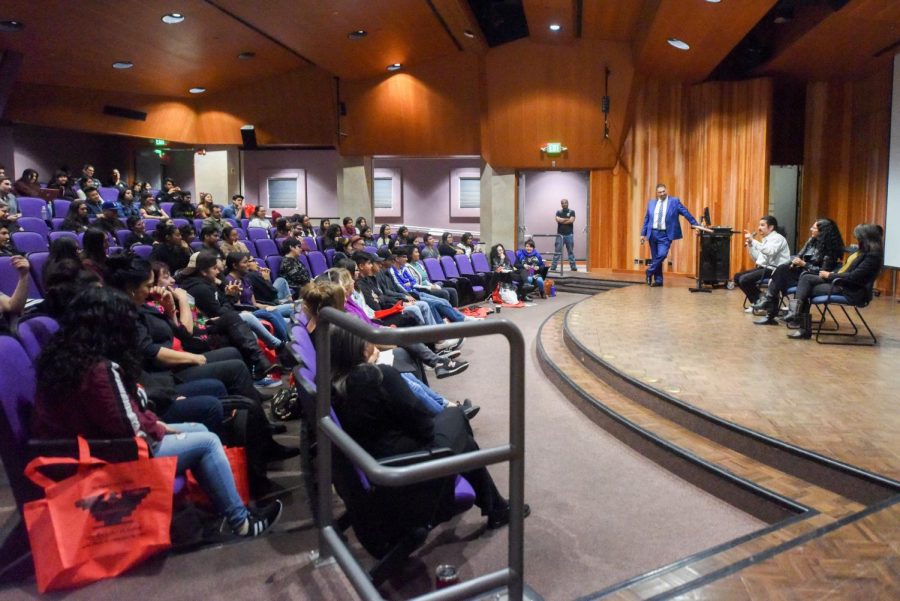 On the stage from left, Elias Serna, Lysa Flores and Sandra De La Losa answer questions from the audience during the Xicanx Culture Conference on Saturday, March 16, 2019, in the Business and Communication Forum at City College in Santa Barbara, Calif.

The importance of culture, heritage, and individuality were discussed through a wide assortment of speakers hosted by American Ethnic Studies Professor Thomas Carrasco at the Xicanx Culture Conference Saturday at City College.

Carrasco curated the event, aiming to paint a picture of what it was like to be an aspiring Chicanx artist from the streets of Los Angeles to the neighborhoods of Santa Barbara during the turbulent nineties.

“Culture is power and power is culture,” said Carrasco. “Create your own reality through art and education.”

He hoped to show how the growing “cultural renaissance” of the time came to shape the identities of many artists.

Opening speaker, artist Sandra De La Loza, talk focused on how art plays an integral part in fighting for political causes. More specifically, against the gentrification of inner-city neighborhoods during the nineties.

“I started seeing shifts in the city, this time we weren’t fighting the drugs, [or] the police state,” said De La Loza. “Now it was the speculative investment in housing that was displacing and transforming the neighborhoods.”

She explained that through creating art against gentrification, she was able to become part of a larger community. The majority of her work focuses on helping disadvantaged renters fight against improper housing practices through protests and artistic expression.

“I wanted to talk about the political aspect of the arts as rhetoric,” said artist, teacher and filmmaker, Elias Serna said.

He recounted his time as part of a “teatro” (theater) group he co-founded called Chicano Secret Service,  telling a story about a street takeover he organized with his teatro group.

“[We were going to] protest the Mexican government murdering innocent men, women, and children,” he said. “We were going to reenact the assassination.”

The group staged the reenactment with fake guns in front of the Mexican consulate where they were met with an LAPD patrol car and officers who had real guns.

“‘It’s freaking cardboard, don’t shoot us,’ and it was the early nineties so it was a good time to shoot people in the streets,” Serna continued.

The audience seemed to resonate with the story.

“We pushed back, I think that’s what teatro and the arts have to do when our people are attacked, we have to push back,” Serna concluded.

“We’re standing on the shoulders of giants… they had the same struggles as us but now they have PhDs,” said Diego Lazcano, a City College student, being thankful that speakers showed it is possible to accomplish their goals while staying connected to their heritage.

The Xicanx Culture Conference sought to celebrate and uplift Xicanx excellence through a wide assortment of scholars, artists, and educators.

“It reminds [students] that they belong, this is a place for them. It’s motivational and inspiring, it recognizes your identity,” said Arturo Rodriguez, dean educational programs, while attending with his family.