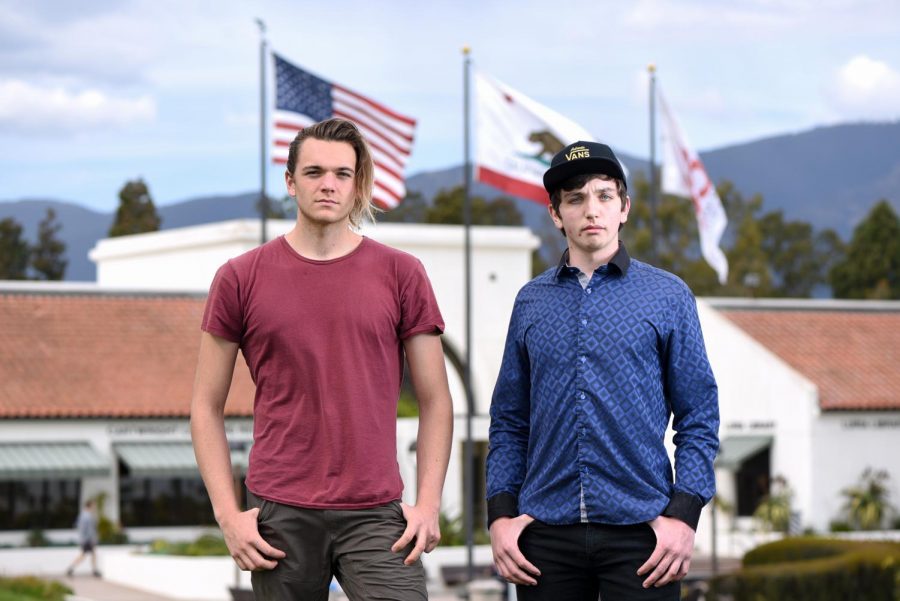 From left, Rafael Carrillo and Cage Englander are in the beginning stages of starting a Young Americans Chapter at City College on Monday, March 11, 2019, in front of the Luria Library in Santa Barbara, Calif. Both are middle college students, Carrillo will be the treasurer and Englander will be the club president.

Creating a more diverse exchange of political ideas is one of the goals of 17-year-old middle college student Cage Englander has for his new chapter of the Young America’s Foundation at City College.

“Our goal isn’t to necessarily change people’s opinions on politics,” Englander said. “Our goal is to just bring conservative ideology to campus to change the dialogue.”

Englander is one of the younger voices in City College’s group of political activists and has taken on the task of opening a new chapter of one of the largest conservative organizations in America.

The club’s Treasurer, Coleman Dennis, said although Englander is young, he believes he is fully capable of being chairman.

“I know he is well influenced in politics,” Dennis said. “It was his decision to start the chapter so it’s his right to do whatever he sees necessary.”

The Young America’s Foundation is a conservative youth organization that aims to teach the youth of America to value ideals such as individual freedom, a strong national defense, and traditional values.

Englander said his motivation for opening the chapter came from many places, including the lack of a noticeable conservative presence on campus.

However, he said, the Pledge of Allegiance controversy was what inspired him to speak up.

“There seems to be this growing vocal minority on campus who are not appreciative of what America has given us,” Englander said regarding the controversy.

He also said, at some of the recent Board of Trustees meetings, he has seen people “being called racist or hateful for their ideology.”

Englander said this is indicative of people not understanding conservative values because the conservative ideology is “not about race.”

Vice Chairman Rafael Carrillo said Englander understands the need for many opinions to be available.

Dennis said two main goals of the club are to bring more conservative speakers to campus as well as spread awareness of their existence.

“We’re not really looking for members so much as supporters,” Dennis said. “We’re just trying to get the word out, and bring on more voices.”

Englander said they have plans for bringing in higher profile speakers, but right now they’re focused on getting donations and officiating their club.

While City College remains on edge about the recent claims of racial discrimination and sexual harassment, Cage Englander has made it his mission to bring the under-represented conservative viewpoint to the forefront.