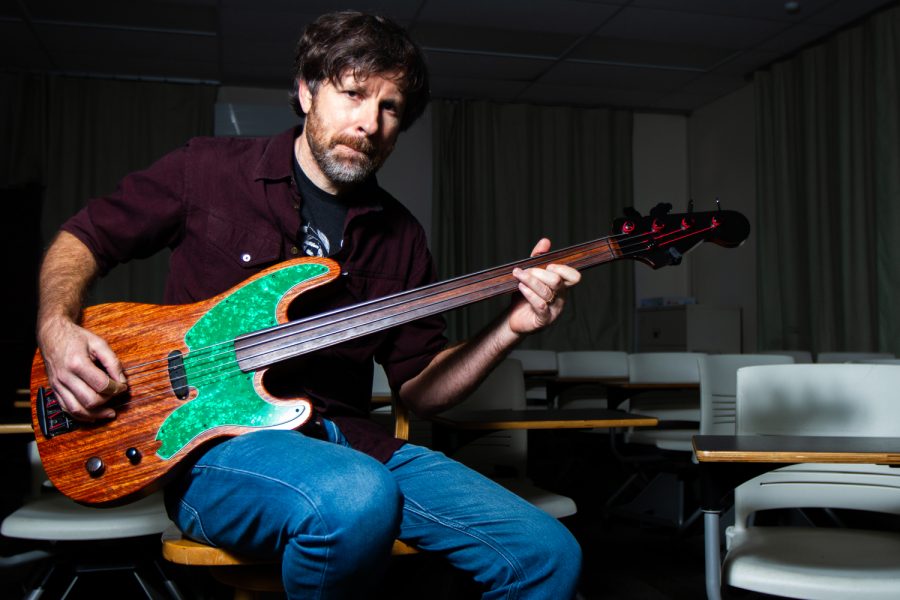 Philosophy Professor Marc Bobro plays his custom bass in the Interdisciplinary Center Building on Friday, March 8, 2019, at City College in Santa Barbara, Calif. Bobro is the bassist in the band Crying 4 Kafka and has been playing bass for about 40 years.

Philosophy professor by day and punk bassist by night, Marc Bobro does it all.

He has been playing with Crying 4 Kafka for eight years. The band’s name, penned by UCLA psychology Professor Paul Abramson, is a reference to Franz Kafka. Kafka was a novelist and literary figure of the 20th century who lived through tragedy.

“We believe in the right to freedom of speech,” Bobro said in regards to the band’s message. “The lyrics can be true to life and in-your-face provocative.”

The extreme physicality and grit of punk music serves as a juxtaposition between the mental and airiness of Bobro’s other profession, teaching philosophy.

“I haven’t had a teacher like him before, in a good way,” sophomore student Alexander Shorb said. “I feel like a lot of teachers teach the same way, and he has a unique outlook that separates him from the rest.”

Their song “Fuck Mom, Fuck Dad” is a perfect example of the band’s self-described provocative lyrics. Bobro said the song is about childhood resentment towards parents and was written for those who “don’t celebrate the way they were raised.”

Bobro has been playing music since middle school, where he played trumpet for the school band. After his taste of performing, he wanted to pursue music and went on to learn everything from the french horn to the tuba, which he still incorporates in live performances today. He said he has played in bands “on and off” ever since.

Growing up, Bobro said he had limited exposure to musical genres. saying he only had access to the small pop record collection his family owned. It wasn’t until he grew up that he found punk rock music.

“Punk really opened the door. It’s raw, you can make mistakes,” he said. “You can do things in punk that you can’t do in other genres of music.”

Bobro plays the tuba on some of Crying 4 Kafka’s songs, an uncommon instrument in a typical punk band lineup.

While punk rock and philosophy may not share a lot in common on the surface, Bobro treads the middle ground that few realize can exist. His distinct style of teaching resonates with students, and his bass rhythms reverberate the walls of the gritty punk clubs of the southwest.

“People don’t understand that older people can rock out,” Bobro said with a grin. “We’re playing faster and harder than ever before.”

Crying 4 Kafka’s music can be found on YouTube, Spotify, Apple Music, and iTunes.