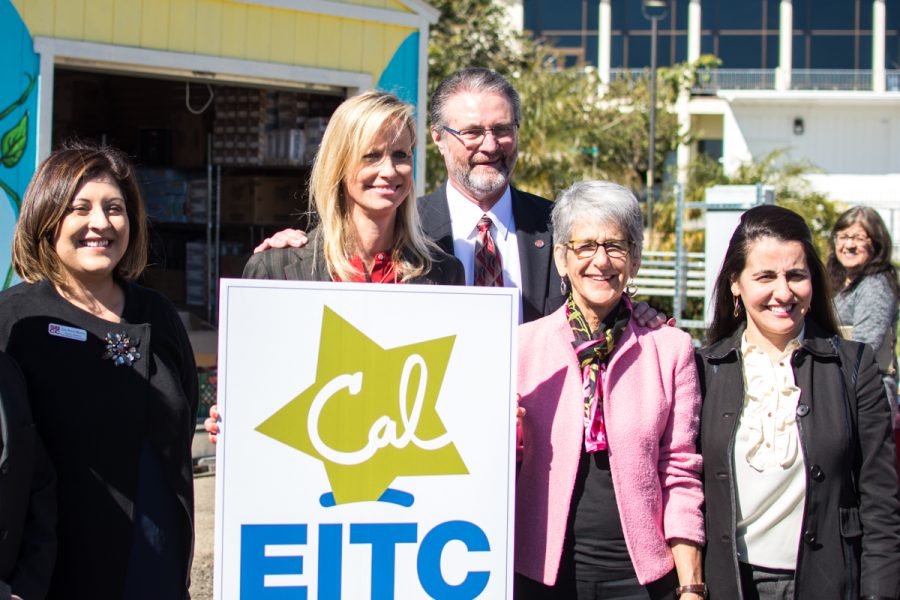 From left, Luz Reyes-Martin, Laura Capps, Anthony Beebe, Hannah-Beth Jackson, and Monique Limón pose for a photo on Friday, Feb. 22, 2019, outside the campus food pantry at City College in Santa Barbara, Calif. Capps, Beebe, Jackson, and Limón spoke about the California Earned Income Tax Credit For Me program, which focuses on helping students who aren’t making enough money to file for taxes.

Students may be eligible to receive up to a thousand dollars in tax credits thanks to a new program that aims to help students struggling with the monetary pressures of college.

The California Earned Income Tax Credit For Me (CalEITC4Me) is aiming to help City College students who aren’t making enough money to file for taxes. The program is mainly focusing on students who are working multiple jobs, single parents and those living below the poverty line. Several speakers gathered at City College Friday to discuss the new program, emphasizing the food insecurity that is rampant amongst students.

“This place feeds the soul,” Senator Hannah-Beth Jackson said, gesturing to the surrounding mountains and horticulture gardens. “But we need more to feed the body… I’ve tried ramen, it’s not great, there are worse things but you don’t want to live on that.”

The event took place in front of the Food Pantry, and students walking by stopped to listen to the speeches and grab some of the free cookies and lemonade. CalEITC employees were answering any questions students may have related to the program while food pantry employees were busying themselves with organizing food.

Around half of community college students are living below the poverty line, Superintendent-President Anthony Beebe said. CalEITC4Me wants to help those who are not making enough money to be eligible for tax returns. This is the first fiscal year where those aged 18-24 are eligible for the program, which before was only available to those older than 24.

If students earn less than $16,000 per year, they may be eligible for the program.

“We know that every dollar we can get into the students’ hands is a dollar that can go into their degree,” Beebe said.

The program is addressing other societal issues, including the gender wage gap. According to Laura Capps, who sits on the CalEITC4Me Board of Directors, around 79% of those who qualify for the program are women. By returning money to single parents, they believe that the wage gap will be lessened significantly.

“Billions of dollars go back to Washington instead of the hands of students,” Capps said. “That is what we are trying to discourage.”

Jackson agreed with that statement, asking “how many homes can you own? How many boats? Let’s bring some of that money back to people that really need help.”

Assemblymember Monique Limón said she is confident that it will be beneficial to California’s economics.

“We will only continue to be the fifth largest economy in the world if we make smart economic decisions, and this is one of them,” she said. “We know that when we invest not just in students but in our community and in the future, we yield good economic outcomes for the future. That is important to us.”

Limón recognized that tuition is a more pertinent issue than it was when she was attending college, with the rising prices making difficult financial situations increasingly difficult. She listed food insecurity, housing, and mental health as the three biggest needs that weren’t being met for college students.

“The tradeoffs that [students] are making are much more difficult than when we were in school,” Limón said.