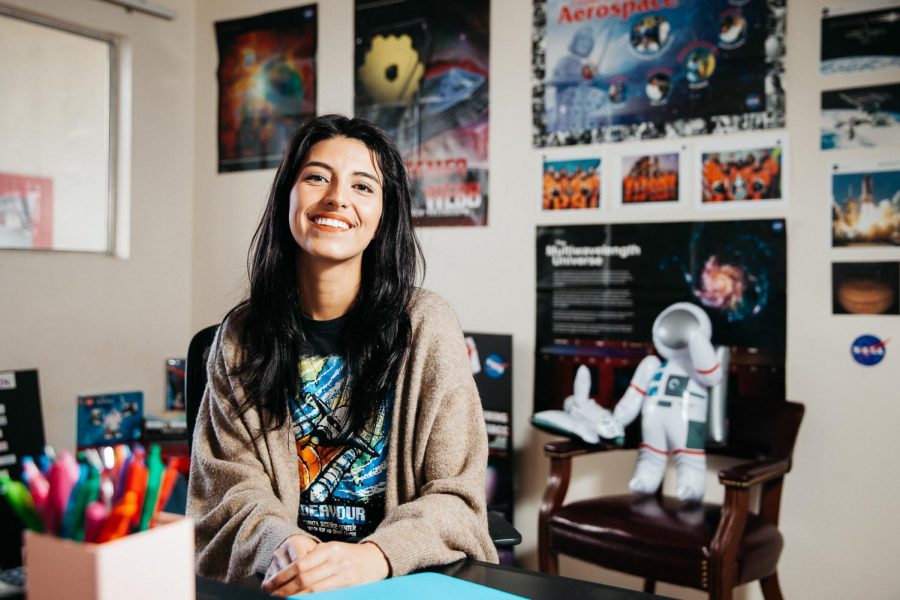 Bianca Vasquez poses for a portrait in her home office on Thursday, Feb. 21, 2019, at her apartment on the Mesa in Santa Barbara, Calif. Vasquez is the founder of the 18 Society of Women in Space Exploration clubs nationwide.

The Society of Women in Space Exploration founded by City College’s Bianca Vasquez has, over the past month, become a nationally recognized organization.

“We’re bridging the gap between minorities, and groups of people who aren’t usually represented in STEM,” Vasquez said.

Vasquez’s vision for The Society of Women in Space (SWISE) began after she attended the Grace Hopper Celebration in the Fall of 2018 in Houston, Texas.

The celebration is geared towards women from all around the world involved in or studying technology. During the conference, Vasquez gathered a group of 25 young women to visit the Johnson Space Center.

“We were all so different but right away we bonded because we were girls in STEM and interested in space,” she said.

In January, Vasquez began working to create SWISE. She originally envisioned it being a City College club but after she “threw it on Twitter,” interest from students and professionals around the country began to spark.

The club now has 18 chapters nationwide that Vasquez manages. The chapters range from community colleges to Ivy League schools and even has a chapter at the University of Puerto Rico.

“What we’re doing is affecting so many different types of people,” Vasquez said.

Nicholas Coletti, a second-year mechanical engineering student and treasurer of SWISE highlighted the importance of men being involved in the club.

“Girls shouldn’t have to gravitate towards each other, they should be welcomed by other guys as well,” he said.

Vasquez, a self-proclaimed “girly girl,” further explained that there is a stigma that comes with having both “femininity and intelligence.”

While the club aims to give a platform for women in STEM, it also emphasizes the importance of supporting women of color in the field.

Hermelinda Gemartino, the vice president of SWISE and first-year mechanical engineering major related to the struggle of being a first-generation Latina college student.

“I always thought that I can’t do college because I’m going to be in debt for my whole life,” she said, explaining that in Latino culture women aren’t encouraged to pursue higher education.

While SWISE is centered around the sciences, anyone with an interest in space can join.

“You need everything for space,” Vasquez explained. “You need communications people, writers, and lawyers. People just think space is all about engineering but there’s so much to it.”

The club is currently working towards hosting a Rocket Boot Camp this summer for low-income high school students in Carpinteria where they will be partnering with the Kosmos School.

Additionally, Vasquez plans to have several guest speakers throughout the semester. With one of them being Dr. Amy Hale, a Science Planner for NASA, attending March 15.

SWISE meets every other Tuesday at 4 p.m with the next meeting being Feb. 26. The club will update the future location for its meetings on its Facebook page.