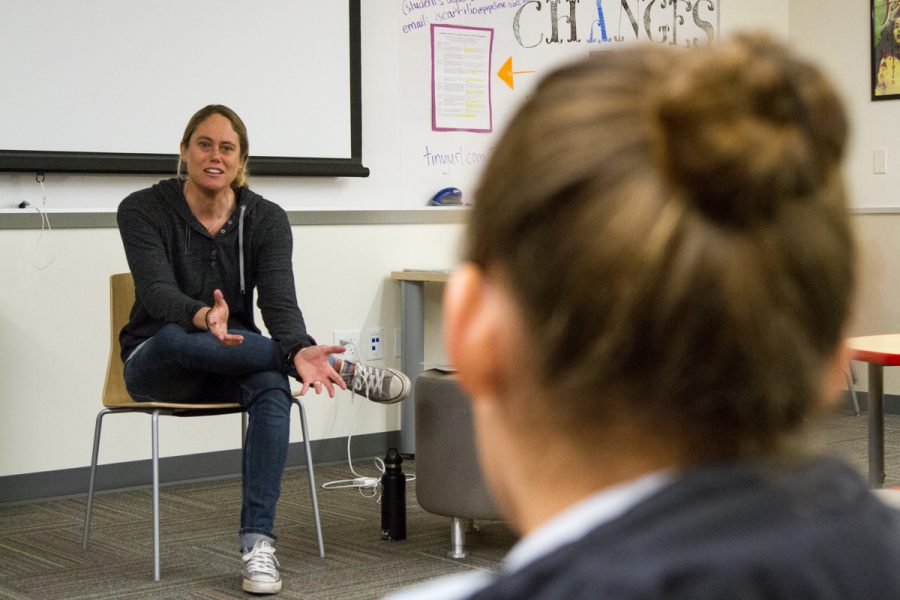 Jen See speaks about how she got into sports journalism after pursuing a doctorate in U.S. History on Wednesday, Feb. 20, 2019, inside the West Campus Center at City College in Santa Barbara, Calif. See writes for a variety of magazines such as Men’s Journal, Cycling, and Surfing.

Students gathered in anticipation to listen to the first Feminist Club guest-speaker of the semester Jen See Wednesday in the West Campus Center.

”I do find it challenging at some times, it’s hard to establish your authority and credibility as a woman, especially since I work in the outdoors,” she said, explaining that traditionally the sports journalism field is dominated by male journalists.

Journalism was never something that See planned on getting into as she initially earned her doctorate in history from UCSB.

See’s main focus is in women’s sports, but she also writes for the Men’s Journal due to a lack of demand for media coverage of women’s sports. This lead into discussion about the Title IX law, established in 1972, and she referred to it as “the grandma of women’s sports.”

The Title IX law established the idea that women can and should play sports, and it has increased the participation in college sports amongst women.

“You wouldn’t have had as wide opportunities for women before Title IX,” See said.

See said she enjoys her career covering sports rather than another topic because of the way sports benefit the women players.

“If you look over the long-term, you start to study these women and how [a sport] influences their life over time,” she said. “Women playing sports are generally more professionally successful, more likely to end up in leadership roles, and are less likely to be involved in abusive relationships.

President of the Feminism Club Katheryn Walk said she was glad to have a speakers like Jen See at the group’s meetings.

“She was great, to see someone like her speak is inspiring,” Walk said. “I hope speakers will pick the club up again after low enrollment in past semesters.”

“Just show up, the club is open for everyone,” Walk said.

The club’s next speaker, Wendy Guzman, will present on sexual trafficking March 6.